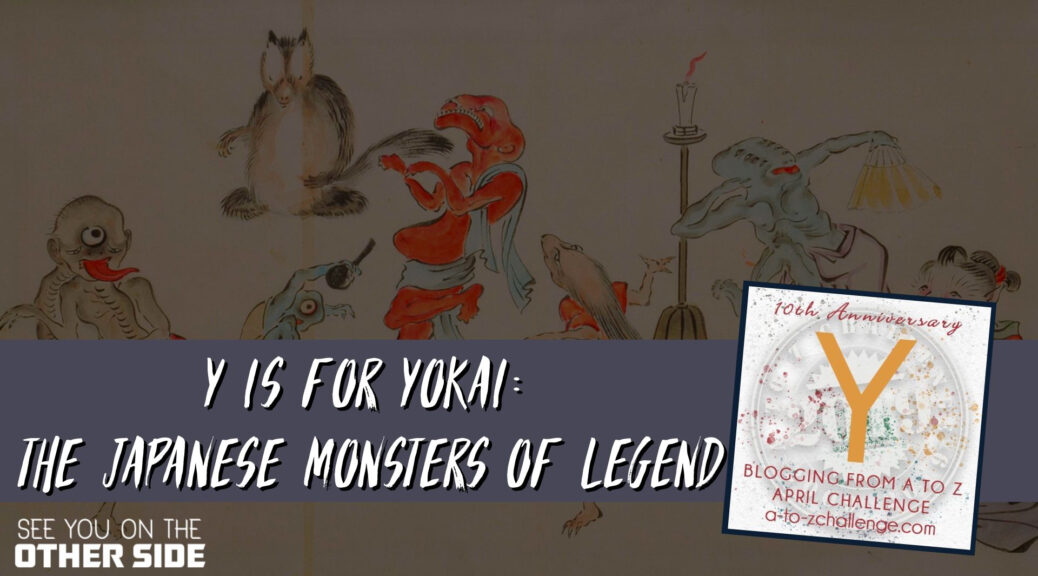 The yokai umbrella covers a legion of legendary creatures including tricksters, phantoms, weird animalistic spirits, and, the unquiet dead known as yurei. Sometimes whimsical and sometimes deadly, these phantasms have a style all their own.

The first reference to Yokai appears in the oldest known work of Japanese literature and the basis of Japanese mythology, the 8th century Kojiki (古事記; Record of Ancient Matters). These spirits embodying the power of place, the ferocity of land and water, and the intensity of human emotion likely grew out of the animism inherent in Shintoism, Japan’s indigenous religion. Although yokai have ancient origins they have inspired many modern media sensations including Yokai Watch, Teenage Mutant Ninja Turtles, and, of course, Pokemon.

Although the vengeful hungry ghosts of the variety so famous now in cross-over horror hits like The Ring and The Grudge haunt the most fearsome side of the yokai spectrum, my favorites are those monsters that clearly illustrate the often overlooked Japanese sense of humor. Here are my top 3 yokai!

The Kappa (No, it’s not just a sushi roll.) is a predatory, amphibious water spirit, seemingly half man and half turtle. It preys on unwary swimmers in rivers and lakes drowning them for nefarious purposes. Kappas seek to eat your flesh, suck your blood, and then yank your soul out through your anus. However, the heinous villany of the Kappa can be repelled quite effectively by the common fart. Ubiquitous, embarrassing emissions, in my case, so I’ve never felt so safe . . . and empowered by my wonky digestion. So dear companions, in future, remember, I’m not launching my underwater stink bombs at you. I’m valiantly saving us all from a watery grave.

Tofu Kozo, which literally translates as “Tofu Boy”, is a treacherous spirit who takes the form of a small child in antiquated, traditional garb who just wants to offer you some fresh tofu. This would be enough to send most modern Westerners running for the hills. The tofu is not even fried. Instead the block is milky white decorated with a simple red maple leaf. Curiously this sounds a lot like the Canadian flag, but I don’t think we can blame Canada for this one. Apparently the Tofu Boy intends to tempt you with his deadly bait. Even one bite of the tofu will infect you with a nightmarish fatal fungus. But just don’t take tofu from strangers and you’ll be fine.

Tanuki is a shape-shifting racoon dog trickster. The Japanese racoon dog (Nyctereutes procyonoides viverrinus), also called the tanuki, is a real, four-legged animal, but it only slightly resembles this mischievous bipedal creature. The Tanuki of legend is a fun-loving prankster who may impersonate your friends to cheat you, but he usually just wants some free food. The true superpower of the Tanuki is not his trickery or his shape-shifting ability, but his enormous and supernaturally versatile testicles. Yes, Tanuki uses his scrotum in a variety of imaginative ways — playing it like a drum, wearing it like a hat, or brandishing it like a weapon. He’s even been known to fly away by inflating his extraordinary nut-sack like a hot air balloon. Today you will commonly find Tanuki statues all around Japan, which serve as both a good luck charm and a reminder not to take life so seriously.

For further reading, I would recommend these books. If they don’t save your life, at least you’ll die laughing.