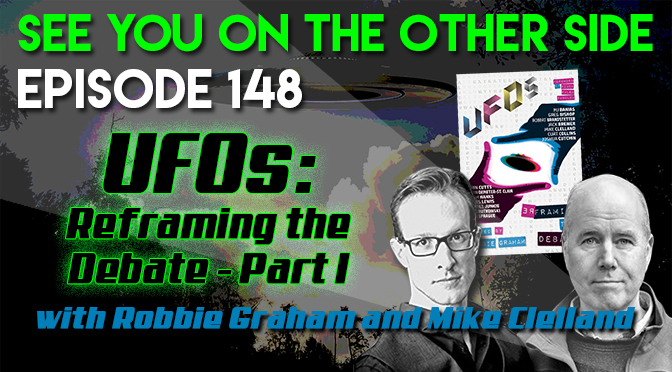 Last time we talked with Robbie Graham, he had just released Silver Screen Saucers, a brilliant tome on how Hollywood and UFOlogy have influenced each other over the past 70 years. In the meantime, Robbie’s star has quickly risen in the UFO field (or is just the planet Venus?) thanks to his thorough research and an academic approach.

His latest endeavor, UFOs: Reframing The Debate is a collection of essays written by some of the greatest modern UFO researchers, bloggers, and even skeptics. It features some of our favorite former See You On The Other Side guests like Joshua Cutchin and Ryan Sprague as well as great podcaster Micah Hanks, and even Canada’s leading “UFO guy, eh” Chris Rutkowski.

One of the contributors to the book, Mike Clelland, is the blogger behind Hidden Experiences and the author of The Messengers: Owls, Synchronicity, and The UFO Abductee. He’s not only a researcher into the field, he’s an experiencer as well and he and Robbie both join the discussion (along with Allison from Milwaukee Ghosts) as we do some deep diving into why we need to rethink everything we think we know about the UFO phenomenon.

That’s one of the reasons we wanted to split this podcast up. It seemed like the conversation naturally moved halfway through and we wanted to make sure that we gave each topic the thought space that they deserved. The first thing for me that changed the way I feel about UFOs was the concept of “high strangeness”.

No, high strangeness isn’t the lost Cheech & Chong movie, it’s a phrase from the great UFO researcher and Project Blue Book leader, Dr. J. Allen Hynek. He used it to describe the absurd and surreal nature of the phenomenon. And people use that term now to describe how once they’ve seen a UFO, their lives change and they start seeing weird stuff in their life all the time. Mike Clelland illustrates the point with several of his stories, as he has been collecting them for years on his blog, as well as having a few experiences of his own (like seeing gray aliens outside his window, missing time as a teenager, etc…)

You see a UFO, then you might see Bigfoot, then you might start experiencing poltergeist activity. It’s like that original sighting opens the door to everything paranormal. But why would that be?

I always thought the people who have more than one kind of experience made them sound even more unbelievable, ya know? The higher the number of experiences, the higher the chance of crazy. But so many people report more than just the UFO sighting. As Mike says in his essay:

And that made me reconsider my assumptions on aliens, that they’re just interplanetary travelers (albeit with a taste for experimenting on the wildlife) and that it’s purely a physical materialist happening, something we can understand with our current models of the universe. But I’m stuck in the 90s X-Files/Independence Day conspiracy mode of thinking, when the new evidence points to what might be an even weirder explanation, almost like Twin Peaks. Indeed, the owls might not be what they seem. (And the Richard Jones evil doppelgänger story from Kansas last week certainly made me think of the denizens of The Black Lodge!)

But that’s the idea of the book, to challenge your former beliefs, to find room in the UFO tent for perspectives ranging from materialist to spiritual to hallucinatory to anywhere in between. We’re talking about a field where even the best evidence is scoffed at (and we’ll be talking about the importance of skepticism in Part 2 next week) so to advance the study of UFOs we’re going to have to be ready to embrace opposing points of view something too often avoided in the Internet Age, because a friendly perspective, the easy path, is only a click away.

Now after seventy years of flying saucers, to change people’s entrenched beliefs on the weirdness that we’re seeing in the skies is no easy task, you might say it’s “Sisyphean”, the mythical Greek King who was damned to eternally roll a boulder up a hill as a punishment for his defiance of the gods (he was always tricking them!) So, we thought that our Sunspot track, “Sisyphus’ Rock” might be the perfect capper to the first part of our epic discussion.

Like Sisyphus and his rock,
I roll our love up a great hill.
Hoping for a chance to reach the summit.
And as the gods of thunder bowl,
I watch the light show in the sky.
But you are frozen, terrified, and weakened.

I know the reasons for your actions.
I know you’ll answer for your tears.
But who will ever be my rock?
when you decide you’re on your own,
and I still draw you rainbows in the night.

I would steal fire from the gods,
if I thought it’d make you smile.
I’d sacrifice my liver for your heart.
Look out in Hades down below,
because I’ll not look back this time.
Now I’m armed with Schwarzenegger, two gats, and a nine.

I will decline Pandora’s Box,
but I think I’ll see what’s in yours.
I’m clawing for the hope that’s at the bottom.
I’ll fight off snakes on Gorgons’ heads,
and I’ll take thunderbolts for you.
But please don’t leave my whispers to myself.

But angel don’t you ever fear,
when you felt me you fell from grace.
But we are all Immortals in the end.