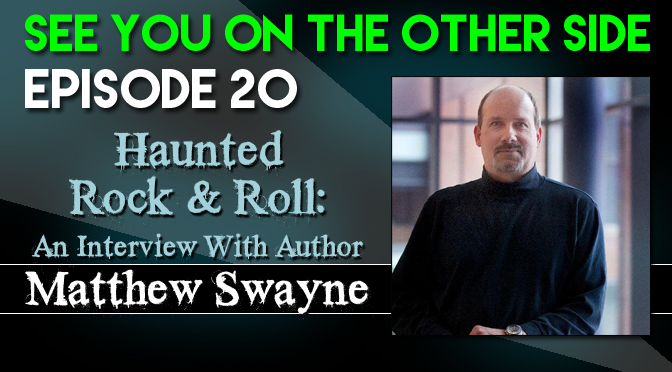 In Episode 10, when we discussed the ghosts of Rock stars, one of the biggest sources of our stories was Matthew Swayne’s book, Haunted Rock n’ Roll: Ghostly Tales of Musical Legends. There were plenty of stories that we left untold that day, so we thought a great way to kick off 2015 would be to have the author himself, Matthew Swayne, for an interview so we could go further in depth on a topic that we truly love, musicians that could never bring themselves to get off the stage… even in death.

Destined for an interest in the weird with a birthday on Halloween, his love of horror movies and interest in journalism and writing led him to write his first book on hauntings at college campuses (and interestingly enough, as well as unbeknownst to them when it was written, you can also find an article that quotes both the interviewer and interviewee of this podcast discussing Madison’s haunted campus right here.)

We start with the discussion on the ways he originally researched his book, how he found out some of the real obscure tales, and the difference between “ghost lore” and “ghost stories”. He connects the lore of the “phantom hitchhiker” story that a lot of towns in America have (the most famous being Chicago’s Resurrection Mary) and how people have made that into an Elvis ghost story as well, something that he thinks fans have created to fantasize about how they could meet their untouchable idols (that was back in the day before celebrities started responding to people’s tweets!) One of the things that makes Elvis different than other rock ghosts is that all across the country, it will be haunted by the Elvis of that age. Memphis gets the young southern gentleman Elvis, while Las Vegas gets the fat Elvis of the 70s.

They talk a little about hauntings of The Rave/Eagles Ballroom in Milwaukee (the rock venue that Mike used to go to the most when he was younger) and how the ghost of Buddy Holly (who played one of his final shows at the club)  appears almost exclusively to musicians there.

The conversation turns to the hauntings at the Cincinnati Music Hall and how to him it seemed to be one of the most legitimately haunted  music venues that he studied, Then they discussed some classic Penn State ghostly folklore before starting to discuss Led Zeppelin.

Led Zeppelin is known for the occult symbolism they used in their songs and imagery and Jimmy Page famously purchased our good friend Uncle Aleister Crowley’s home on Loch Ness, the Boleskine House where there’s a remarkable number of hauntings, something that he admits to being creeped out by.

Mike and Matt reprise Dan Aykroyd’s great story of Mama Cass’ house and Matt adds some new details to the story that make it more interesting, because they add up with similar stories from Beverly D’Angelo (Chevy Chase’s wife from the National Lampoon’s Vacation series), who also spent time in the house.

They finish up the discussion with a little more thoughts on the “27 Club” and how the number 27 itself might have more than significance. They talk a little about numerology, what the numbers could mean, and how the journey of a rock art is deeply connected with the occult from its very beginnings.

Article that features both Mike and Matthew on a possible University of Wisconsin Campus Ghost Tour, Molly Hanson

Featured Song: Forever In The Snow