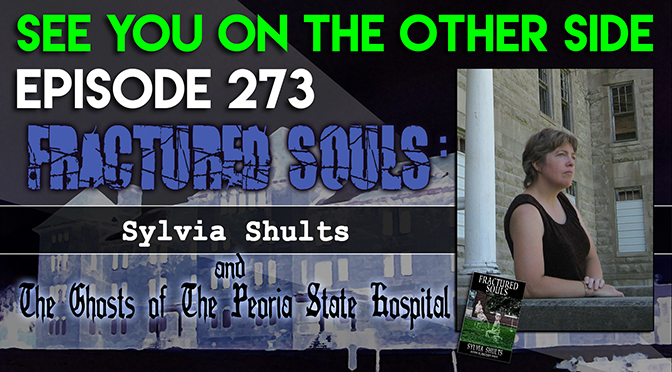 Nothing gets a ghost hunter salivating like the opportunity to do an investigation in an abandoned sanitarium. It seems like we get our ideas of what life was like in a mental asylum entirely from movies like Return To Oz or Sucker Punch, where sadistic psychiatrists are hellbent and eager to perform lobotomies and shock treatment on innocent patients, living in squalor, surrounded by murderous lunatics and psychopathic nurses. The spiritual energy expended in such a place seems like a bonanza of pain and torment, which look great on a ghost’s resume. It’s usually cold, the lights are off because the power has been disconnected, the paint is peeling off the walls, anything metal is rusted, and sometimes the rooms are filled with antiquated medical equipment too big to move and not valuable enough to sell… it feels like you’re walking into a torture chamber set on a horror movie.

But what if it wasn’t like that at all? Author and paranormal investigator Sylvia Shults has written several books on the spirits of the Peoria State Hospital in Illinois and her latest work, Fractured Souls, talks about the history of the sanitarium and the ghost experiences that people have had there. But instead of the ghosts being traumatized, they’re grateful they were taken care of by a doctor who was more interested in compassion and healing than mad science and brain surgery.

Dr. George Zeller came to Peoria in 1902 and he had the bars removed from the windows and the mechanical restraints taken off the beds. He was a new breed surgeon that believed the “incurables” (and the hospital was originally known as the Illinois Asylum for the Incurable Insane) would do better when treated with kindness than restriction.

One of the prime examples is the case of Roda Derry, who Shults also wrote a book on called 44 Years in Darkness:  A True Story of Madness, Tragedy and Shattered Love. Roda withdrew from the world after the mother of her lover threatened to curse her if she didn’t leave her son and spent twenty years in a Utica Crib, which is like a crib for adults that locks on the top. Roda eventually clawed her own eyes out inside it.

When Doctor Zeller heard her story, he had her transferred to Peoria immediately and let her out of the crib. During her last years she was surrounded by people that took care of her instead of locking her away to forget and she flourished there. She might be one of the most famous ghosts of the hospital and people still see and hear her spirit today.

However, it seems that she was treated better by Dr. Zeller than some modern ghost hunters. When the team from the paranormal television show Ghost Asylum came to Peoria, they disregarded the advice from Sylvia and decided to use a Utica Crib as a “ghost trap” to try and draw her spirit out. Once again, humans are crueler than the supernatural.

Another TV show that tried to use the history of the asylum was Ghost Hunters. They were intrigured by the story of A. Manual Bookbinder, a mute patient who wouldn’t speak so they never knew his name (they gave him the name Bookbinder as a kind of joke), but he would attend every funeral at the hospital and he would cry his eyes out. “Old Book” wept for the people who had no one to weep for them and there’s a terrific ghost story that Doctor Zeller told about him. The TAPS team thought they might have gotten him on video, but Sylvia has some different ideas.

In this episode, Sylvia shares her favorite ghost stories from the Peoria State Hospital and discusses the investigations that led her to write Fractured Souls. We cover some of these questions in the interview:

Probably the most shocking and cruel image for me of the whole conversation was Syliva discussing the Utica Crib. With a hospital bed in the crib, the patients only had twelve inches of vertical space to live in. It was a bed where you could never get up and you were never let up. They justified the practice because they said that they restrained patients who might be suicidal or cause self-harm, like Roda Derry did by ripping out her eyes with her own bare hands. And at the time, they might have thought it was more comfortable than a straitjacket.

It shows how far we’ve come in the treatment of mental illness that we’re horrified by such a device. But it also shows that even our better natures need to be checked sometimes, the proverbial “Road to hell is paved with good intentions” because what starts as compassion can turn into cruelty.

Dear Father hear my confession
This crusade has become obsession

This crusade has become obsession
Dear Father hear my confession