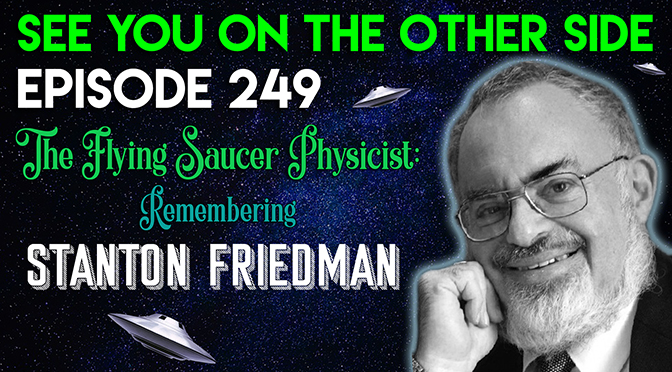 The Betty and Barney Hill alien abduction. The Roswell UFO crash. The Majestic-12 documents. These are some of the biggest bombshells in UFOlogy and they all share one common denominator at their core. Stanton Friedman was involved.

Graduating with his degree in nuclear physics in 1955, Friedman worked at companies like General Electric and McDonell-Douglas in their jet propulsion laboratories before his interest in UFOs sparked him to delve full time into the field in 1970. From then on, he wrote several books on the subject and gave hundreds of lectures around the world.

You might have seen Stanton Friedman in a UFO documentary, you might have seen him on Nightline, you might have seen him on the Travel or History Channel in one of their hundreds of UFO documentaries. The thing is, if you’re into the UFO Phenomenon, you’ve seen him! I had my fanboy moment at the Michigan Paranormal Conference and I was just walking through the vendor room and I saw him sitting quietly at a booth just making small talk with an admirer. I hadn’t read the entire schedule yet so I didn’t know that he was going to be there, and from that moment I knew I had to make sure to see his presentation.

And it was exactly as I’d hoped it would be. It was a professorial lecture and it was straight up nuts-and-bolts old school extraterrestrial hypothesis aliens are piloting UFOs and the government is covering it up. Stanton Friedman was the man who first did the heavy duty research into the Roswell flying saucer crash which is now the most famous UFO event of all.

In his 1997 article, “The UFO Challenge”, Friedman said there were four major conclusions that he’d reached after decades of UFO research:

“The evidence is overwhelming that Planet Earth is being visited by intelligently controlled extraterrestrial spacecraft. In other words, SOME UFOs are alien spacecraft. Most are not.”

“The subject of flying saucers represents a kind of Cosmic Watergate, meaning that some few people in major governments have known since July, 1947, when two crashed saucers and several alien bodies were recovered in New Mexico, that indeed SOME UFOs are ET. As noted in 1950, it’s the most classified U.S. topic.

“None of the arguments made against conclusions One and Two by a small group of debunkers such as Carl Sagan, my University of Chicago classmate for three years, can stand up to careful scrutiny.”

“The Flying Saucer story is the biggest story of the millennium: visits to Planet Earth by aliens and the U.S. government’s cover-up of the best data (the bodies and wreckage) for over fifty years.”

Those were the tenets that he stood by and he argued with debunkers, clashed with other UFOlogists, defended his research from live events to TV shows, and stuck by his guns until the very end. Stanton Friedman passed away on May 20th, 2019 at the age of 84 and he remains a giant in the field of UFOlogy and highly respected by the people who knew him.

And to remember him, for today’s episode we’re bringing in Stanton’s friend and fellow Roswell researcher Don Schmitt, who co-authored The Truth About The UFO Crash At Roswell which became the basis for the 1994 Showtime film, as well as investigative researcher and Illinois MUFON director, Sam Maranto, who was directly influenced and inspired by Friedman’s work.

Don’s latest book (coming out June 1st) is a updated version of UFO Secrets Inside Wright-Patterson: Eyewitness Accounts from the Real Area 51 and it features a foreword written by Mr. Friedman, the last thing he published before he passed away.

Stanton Friedman will also be remembered at this year’s Roswell UFO Festival, where he served as an advisor to the museum and festival, along with Don.

A phrase that we struck on in the podcast was “UFOG”… The Unidentified Flying Original Gangsta. Stanton Friedman was one of the earliest scientists who took the UFO phenomena seriously back when it wasn’t cool to be on the side of the Extraterrestrial Hypothesis. He debated the debunkers in worldwide forums long before the History Channel or Tom DeLonge made flying saucers culturally hip. He listened and validated the experiences of abductees before the rest of the community took them seriously. His bravery in taking the plunge is an inspiration to everyone of us who seeks the truth and this song is dedicated to him. Here is Sunspot with “UFOGs”.

threats and disinformation
coverups and lies
we have to stay unafraid

we look to them for inspiration
to keep our eyes on the skies
now it’s up to us to take the reins.