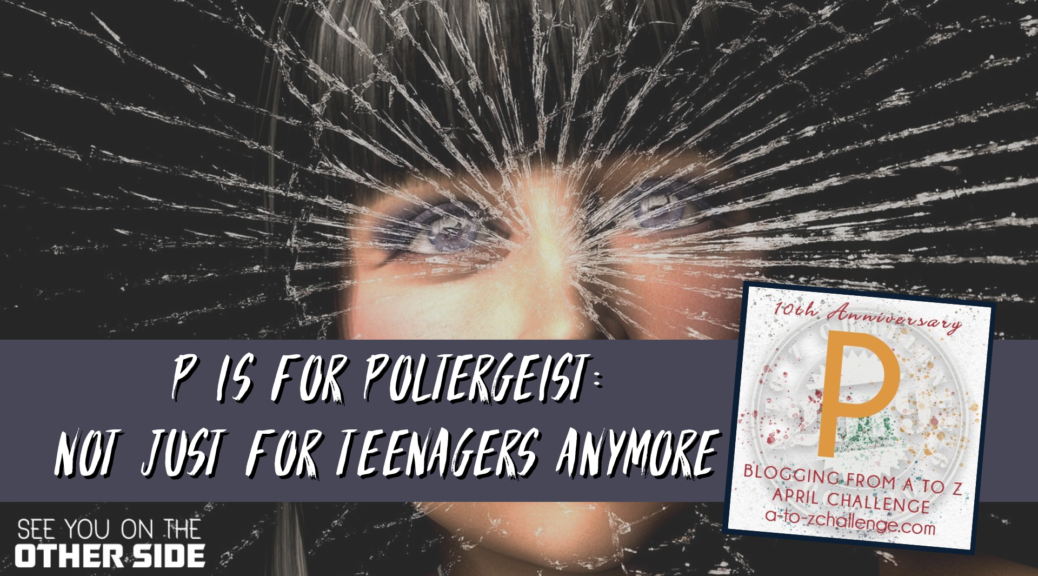 Although I have respected colleagues in paranormal investigation who immediately dismiss all poltergeists cases as fraud, to a student of history, this approach seems limited and unreasonable. So many poltergeist cases pop up throughout history and across cultures that such casual dismissals don’t make sense. These eerily similar accounts of blatantly nonsensical manifestations are reported by very different populations dating back to antiquity and differ greatly from the usual ghost story narrative. This strongly suggests something is actually happening that goes far beyond mere imagination.

The German word “poltergeist” means “noisy ghost” and refers to the chaotic, cacophonous, house-wrecking phenomena that have been reported for centuries all over the world. These include, but are not limited to mysterious raps and other loud noises, untraceable fires and water damage, and the reckless hurling around of anything not nailed down by unseen forces. The word was first coined to describe such manifestations in 1638. Later Martin Luther would popularize the term in his religious writings. In 1848, the OG ghost hunter Catherine Crowe introduced the term to English usage in her groundbreaking catalog of the strange, The Night-Side of Nature.

The first recorded poltergeist case was in the 4th Century, according to Christopher Laursen, who wrote his PhD dissertation on the history of poltergeist phenomena at the University of British Columbia. Other sources attest such accounts date back to Ancient Greece.

The prevailing hypothesis maintains these violent outbursts may not be due to ghosts or any external forces at all, but to the power of the mind alone. Today poltergeists are mainly viewed as uncontrolled tantrums of telekinesis perpetrated most commonly by adolescent females. The modern study of the unexplained, parapsychology, has largely reclassified poltergeist activity as a human-centric phenomenon with the new label Recurrent Spontaneous Psychokinesis (RSPK). However, fashionable this current explanation, such activity has not always been blamed on the unconscious psychic machinations of disturbed teenage girls, but to many other monsters including ghosts, demons, fairies, and vampires.

My favorite podcast discussion about poltergeists was with Fortean author Geoff Holder. He spoke with us about his masterpiece of research, Poltergeist Over Scotland for which he examined 134 poltergeist cases documented in the historical record. Many different cultural contexts have been imposed upon poltergeist manifestations over the ages. However, in his opinion, no one explanation applies to all cases, even our modern interpretation. He has found that only 1/4 to 1/3 of poltergeists center on an adolescent human agent. To Holder, poltergeist activity usually has no obvious purpose and may just be the work of feckless entities, essentially the “numpties” of the supernatural.

Whereas most hauntings function as memento mori or cold comfort for mortality, poltergeist activity, on the other hand is often so chaotic it’s more likely to remind us that humans are not the center of the universe. Holder asserts that it may represent a non-human intelligence which is almost entirely indifferent to us.

Although Holder admits hoaxes and pranks do account for some poltergeist cases, as they do for any reported phenomena, he maintains that they cannot explain away the literally thousands of poltergeist cases reported by multitudes of reliable witnesses and the consistency of their accounts over centuries. In his study of 134 cases, he found that only 4.5% involved hoaxing. The analyses of other researchers indicate these numbers are between 3% and 15%.

Holder also hopes that the physical nature of poltergeist cases will open up the possibility for the scientific study of this phenomena. He cites one 2010 study of the unique audio signature of poltergeist raps as a step in the right direction. Conceivably studies such as these could some day lead to the scientific breakthrough for which every psychical researcher has been waiting.

For more fascinating poltergeist cases, listen to the following: 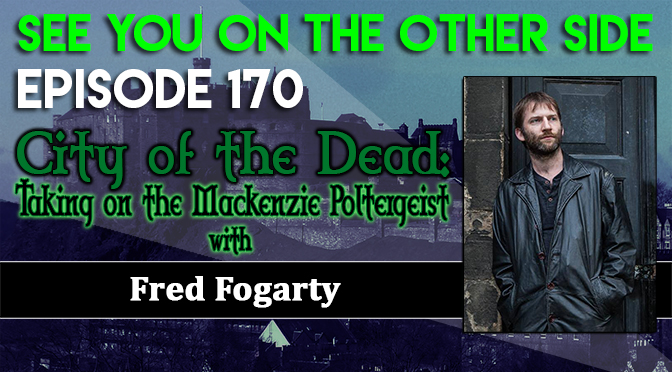 Adventurer and storyteller Fred Fogarty has been working with City of the Dead Tours in Edinburgh, Scotland for over a decade. He leads ghost walks into the Covenanters’ Prison and the ‘Black Mausoleum’ in Greyfriars Graveyard, home of the infamous Mackenzie Poltergeist. It’s his job to stay calm when the Mackenzie Poltergeist attacks, inflicting physical effects on tourists including scratches, bite marks, bruises, welts, vomiting and loss of consciousness. We met Fred for the first time at the Chicago Paranormal Conference and since then we’ve known that we need to have him on the show! So, Fred was back in Chicago a couple of weeks ago and Allison went down to interview him in person with me Skyping in to make snarky remarks.
In addition to being a tour guide, Fred has spent the last five years developing a system of well-being that makes improving and maintaining mental health accessible, fun and enjoyable, and firmly where it belongs: within YOU. It’s called MindSpaOdyssey and you can check that out right here!
Now, in the episode you hear about the history of the Black Mausoleum and how the Mackenzie Poltergeist attacks began. It’s named after George Mackenzie, who helped orchestrate the murders of over 18,000 Scotsmen in the name of unifying them all under the Church of England during a period known as “The Killing Time”. After Charles II restored the Monarchy in the late 1600s, he wanted everyone back under the Anglican Church (where he was in charge). The Scottish were promised 50 years earlier that they could practice their Presbyterianism (in fact they signed a Covenant to do so, so they were known as the Convenanters.)
George Mackenzie imprisoned them, made them live under subhuman conditions unless they would submit to the will of the English Crown and Church and most of them died sad deaths in the Covenanters Prison and were buried in Greyfriars Kirkyard Cemetery onsite. When Mackenzie finally died, he was buried in a mausoleum which was on the site as well. In 1998, a vagrant broke into Mackenzie’s tomb and ransacked the place and that’s when the unusual attacks began on the living who visited the tomb.
Now, I mentioned the City of the Dead ghost tours before because I think it’s one of the best ghost tours in the world (and certainly my favorite). I took it on a vacation a few years back and believe I was touched by the Mackenzie Poltergeist myself! And man, my camera was crap at the time, but here’s some pictures and the journal entries I made the next morning after we took the tour!
City of the Dead Ghost Tour – July 25th 2008 10pm
We walked back to the hotel to get our jackets and raced to St. Giles’ Cathedral to the tour. We almost didn’t get there because it was nearly a half-hour walk from the hotel. There was at least 60 people on the walk and we made it just in time as the group started to move.  We went to Greyfriars Cemetery where over half a million bodies were buried (mostly plague victims) and got great views of Edinburgh Castle (which blew our minds, it’s situated on a hill overlooking a chasm, this city is improbably beautiful , like the Epcot Version of a Scottish city, where parts of it look like models from afar. )
The real scary story was from the Covenanters Prison and the Mackenzie Poltergeist. We went into the Black Mausoleum which was scary as Hell (and they juice you up with stories of attacks and knockouts ands such there) and told some good ghost stories but cheapened it with someone jumping out and causing a fake scare (the guide apologized and said his boss makes them do that.)
I didn’t feel anything, except for a tapping on my left shoulder, but I think that was my imagination combined with adrenaline. The tour was great fun, though, and we loved it.
The view of Edinburgh Castle from Greyfriars was astounding and you can see how it influenced Bram Stoker, Mary Shelley, JK Rowling, Charles Dickens, and Robert Louis Stevenson.
So if you’re in Edinburgh, don’t miss this tour, for real!
Fred is also going to be at the first ever Hawaii ParaCon, taking place July 13-15, 2018 and we talk about this in the episode as well. This is going to be a really special destination kind of event, and if you’re interested (and you should be, it’s the Paranormal in Paradise!) then make sure to check it out, it’s going to be something spectacular!
This week’s song of course is inspired by that right bastard George Mackenzie and the energies of hate and vengeance that swirl around inside the Black Mausoleum and the Kirkyard. It’s a new Sunspot track called “The Killing Time”.

The air is thick with hatred and envy,
Souls that aren’t just looking for some peace,
A madness that we dare not comprehend,
the angry dead are looking for revenge.

Seething rage, unceasing hate
To burn the living kind,
Mercy and kindness slayed with the headsman’s blade
All gone in the killing time.