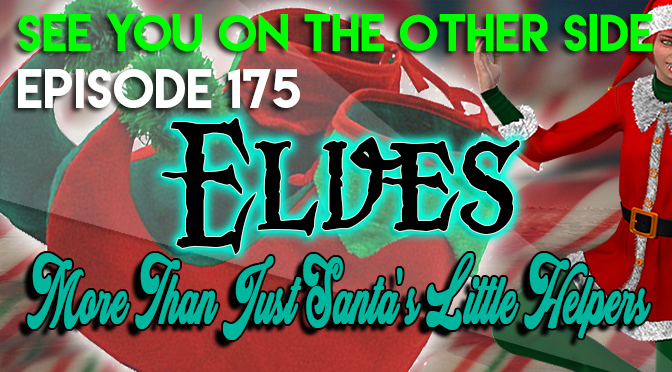 When most people think about elves in the modern day, they either think about Legolas in The Lord of the Rings or they think about the short little fairy like creatures with Mr. Spock ears that make toys for Santa Claus.

Now, Santa’s Workshop and the elves that build his toys is a creation of mid-Nineteenth Century magazines, but the history of elves goes a lot deeper than just working overtime at the North Pole.

In this episode, we talk about where Santa’s helpers came from historically, but we also explore the millennia-old legends of elves, how Christian missionaries turned them into Satan’s little helpers (not a typo!) and how these nature spirits might still just be running around Iceland. In fact, in Iceland there’s The Elf School which teaches their history on the island and an Elf Whisperer who will have you over for tea with leaves grown by her little friends!

And here’s an interview Allison got with Magnus from The Elf School!

For this week’s song, we took a poem that was written anonymously in 1857 for Harper’s Weekly and put some music to it. There just aren’t enough Christmas songs that talk about Santa’s elves. Since this poem was one of the first documents of St. Nick’s sweatshop, we are excited to be the first ones to immortalize it in song! Here is Sunspot with “The Wonders of Santa Claus”.

Beyond the ocean many a mile,
And many a year ago,
There lived a queer old man
In a wonderful house of snow;
And every little boy and girl,
As Christmas Eves arrive,
No doubt are overjoyed to hear,
The old man’s still alive.

It would be capital for sure,
to glimpse his wondrous shop;
But when he hears a stranger he
Orders the elves to stop;
And the house, and work, and workmen all
just take a little twist,
just when you think they that are there,
They’re off in a frosty mist.

It were an endless task to tell,
The length his list extends,
Of curious gifts the queer old man
Prepares for Christmas friends.
You might be guessing who he is,
And the country whence he came.
Why, he was born in Turkey,
And St. Nicholas is his name. 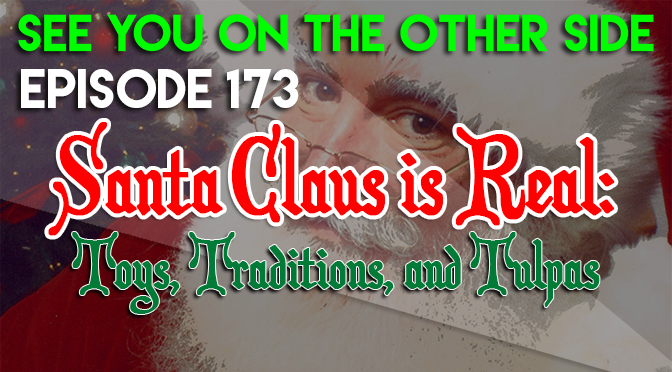 Ho ho ho, friends, it’s a Yuletide tradition for us to uncover the weirdest stories we can about the Christmas season and this Holiday is no different. In the past we’ve covered everything from Krampus to Icelandic Christmas monsters to Holiday ghost stories and Alien Jesus, but we’ve hardly talked about the star of the show in most children’s imagination over the holidays, and that is Santa Claus! It’s St. Nick’s Day on December 6th, so we thought this is the perfect week to talk about him.

In this episode we go through the long history of Saint Nicholas, from his beginnings as a young holy man in 4th century Turkey who came from a rich family and was a deeply generous bishop who saved young women from lives of prostitution to eventually being venerated as a saint because he brought three murdered children back from the dead and he telepathically appeared in the dreams of Emperor Constantine. Awesome, right?

And while Saint Nicholas was a hugely popular saint in Europe in the Middle Ages, he wasn’t always a bearded fat man in a red fur suit who cam e down your chimney,  that didn’t happen until he came to the New World and was popularized as a character in Clement Clarke Moore’s “A Visit From St. Nicholas” poem in 1822 and Thomas Nast’s illustrations in the 1870s. And of course, Coke spent a ton of money advertising the jolly old elf too, helping out with that red and white suit he’s famous for.

Because Christmas itself is a little bit of a Pagan holiday (burning the Yule log a the Winter Solstice has been going on way before Baby Jesus), there’s a touch of Pagan in our Santa Claus, influenced by Odin and his eight-legged horse! And of course even Saint Nick can’t please everyone, because some Christians think that Santa is actually an avatar of Satan. And while most of us might think that’s kinda funny, the same Puritans who gave us Thanksgiving (ahem… and the Salem Witch Trials) also banned Christmas and made celebrating it a punishable offense. There was too much drinking, too much revelry, and just too much fun for them. The Puritans thought of it was a wasteful and decadent celebration, so they banned it in the New World and in England for a few decades in the Seventeenth Century.

Truly my favorite part of this discussion though is when we start getting down to brass tacks. Santa Claus is real and people have been reporting sightings of him for awhile now. Yes, the same way they report sightings of Bigfoot, the Loch Ness Monster, and UFOs. Kids and adults have seen Santa under the tree, they’ve seen him and his sleigh flying over their houses, they’ve seen him peering into their bedrooms… Yeah, I was taken aback as well.

So, what is it? Is there really an immortal who lives at the North Pole and stops time every year on Christmas Eve to deliver presents to the good boys and girls of the world? Could hundreds of millions of children believe him into existence? A tulpa created with the Christmas wishes of centuries of kids? Could there be something supernatural happening and the kids just interpret it as Santa Claus, kinda like the High Strangeness UFO discussion we had with Robbie Graham and Mike Clelland? That’s gotta be up for you to decide. For me, it’s like my Mom always said, “If you believe in Santa, he’s real.”

A few years back, we participated in a Christmas benefit album for the Salvation Army, we put our own spin on a track called “Hey Santa” by Madison songwriter Joe Snare, who put the compilation together.

Hey Santa,
You’ll be coming soon,
I cut my hair and changed my tune,
I’m a brand new man this year.
Hey Santa,
I’ve been counting days,
I cleaned up all my nasty ways,
I got your message loud and clear.

That lump of coal you gave me last year really made your point.
I’ve toned it down a notch or two,
look how I cleaned up this joint.
You’ve got Christmas right there in your hands,
Hey, Santa, won’t you give me one more chance?

Hey Santa,
I’ve been clean and straight,
you got no need to hesitate,
put me on the witness stand.

I couldn’t help but notice how my tree was kinda bare,
last time Santa came to town, you didn’t leave a present there.
You’ve got Christmas right there in your hands,
Hey, Santa, won’t you give me one more chance?

Hey Santa,
When you fill your sack,
don’t forget about me, Jack.
Because I’ll be looking out for you, you know.

Now you and I know I’m not quite an angel or a saint,
I’m doing everything I can,
to be someone that I ain’t.
You’ve got Christmas right there in your hands,
Hey, Santa, won’t you give me one more chance?