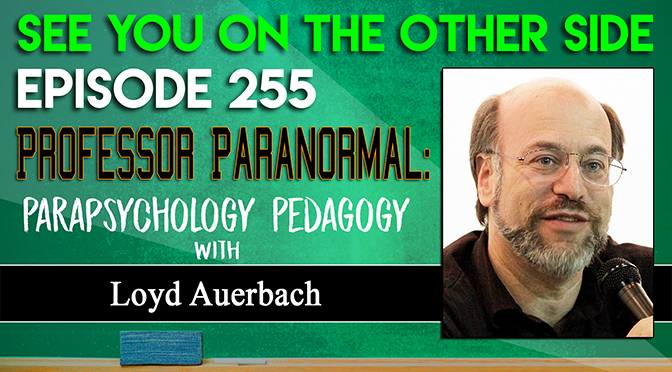 With the litany of web sites and television shows on the topics of ghost hunting, psychic mediums, and theories of the unknown, it’s easy to get swept up in what is entertaining, but not necessarily good/correct information. The X-Files may have popularized the expression “The Truth Is Out There,” but how many paranormal investigators make the effort to apply proper research methodology when looking for the truth?

Today’s guest, Loyd Auerbach, has built his career around researching the paranormal in a scientific manner. His impressive combination of academia, open-mindedness, and careful investigation makes him uniquely qualified to responsibly educate us on the topic of Parapsychology.

Loyd was an early guest on See You On The Other Side, back in 2015 when we were still in the double-digit episode numbers. I recommend checking out that episode to dive deeply into his extensive educational background, and hear Mike fanboy out at the opportunity to talk to one of his heroes:

But this time around, Mike was on vacation, so Allison Jornlin of Milwaukee Ghosts and I had the opportunity to converse with Loyd. The timing was perfect, as both Allison and Loyd will be presenting at Hawaii Paracon in less than two weeks!

Loyd’s interest in the paranormal and psychic abilities dates back to his youth, with ghost stories and television shows peaking his curiosity. Entertainment such sitcoms Topper and Dark Shadows, reading classic Greek Mythology, and monster movies fascinated him, as did the study of science and other “nerdy” activities. His natural inclination was to admire psychic abilities- not fear, chide or ridicule them.

By the age of 13, Loyd was reading works by J.B. Rhine and his colleagues. He formed a parapsychology club in high school (endorsed by Rhine himself!), which opened doors to meeting other luminaries in the field. His early exploration of the topic provided a perfect foundation for continuing studies at JFK University.

So, what is involved in earning a degree in the field of paranormal/parapsychology? Loyd’s rigorous graduate academic studies included history of parapsychology, laboratory research, field investigation of real-world cases, physics and parapsychology, anthropology and paraspychology, neuropsychology, statistics and more. Clearly, choosing this career requires unabashed devotion to an extensive amount of work.

Years and numerous case studies later, Loyd points the skeptics to research and evidence of psi/psychic abilities. Compelling data/statistics behind the Ganzfeld studies and the Stargate remote viewing program “shows that there’s something really here.” And his own extensive work with psychics/mediums has provided evidence that humans have a tap to an information source that is undeniable. However, he is unabashed in putting “a big question mark” next to cases where the proof is not present.

Loyd recounted one entertaining case, dubbed “The Sexorcist”, in which a house was haunted by the energies of an extremely amorous couple. This brought to light the possibility that a residual type of haunting does NOT require that the origin of the “residue” be deceased… A myth perpetuated by modern ghost entertainment. What would it be like to witness a ghost of someone still living? Apparently, some people have seen apparitions of their own self. Can you say…

My paranormal perspective continues to grow, thanks to guests like Loyd. For those striving to develop their own psychic abilities, he recommends beginning by making sure to write down (or sharing with another) any personal experiences/feelings that you think may be paranormal. The conscious labeling/acceptance that you are experiencing something can help identify patterns in the body/mind which can bring light to when/why these things are happening.

And with his strong dedication to education, Loyd was the perfect person to recommend books for us to read and expand our own knowledge of the paranormal. Here’s a starter list we went through, which very well may be the beginning of a See You On The Other Side Book Club (join our Patreon community here!):

You can also further your own education through online classes available at the Rhine Research Center, many of which are taught Professor Paranormal, Loyd Auerbach himself!

For the song this week, we took one of Loyd’s most well known quotes, “Faith is belief without proof. Faith is fine, but don’t call it science.” and put our own spin on it. Here’s Sunspot with “Bull$h!t Detector”.

Faith is nice but proof’s a little better
You’re setting off my bull$h!t detector
If it don’t pass the test for the professor
Then I don’t need you
Unless you’re true

Show me don’t tell me, no pink elephants, don’t tease
If you want me to stay I need some evidence, so please