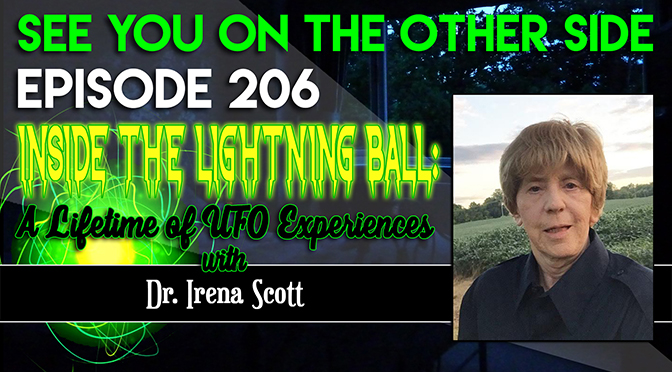 Dr. Irena Scott has been seeing UFOs since she was a little girl. She was only five when she had her first strange encounter with a lightning ball outside a window. Growing up on a tiny farm in rural Ohio in the mid-Twntietch Century, little Irena didn’t know what flying saucers were or who the little green men that flew them wanted but she continued to experience weird things all throughout her childhood and well into the rest of her life.

Dr. Irena Scott went on to work for the Defense Intelligence Agency (a United States government agency focused on providing foreign intelligence to support combat missions), get her PhD in physiology from the University of Missouri, and serve  in various academic capacities at universities across the country. She’s been on MUFON’s board of directors as well as publishing several books on UFO phenomena.

While she’s researched sightings and cases with everyone from Jenny Randles (the woman who gave us some of the alien/human hybrid theories) to Budd Hopkins (one of the researchers responsible for our modern ideas of alien abduction), we mostly stick to the experiences that Dr. Irena Scott has seen for herself and in this episode, you will hear:

You can find her book, Inside The Lightning Ball: Scientific Study of Lifelong UFO Experiencers on Amazon or her website, IrenaScott.com.

One of the things I liked about Dr. Scott, was that she wasn’t trying to explain anything away. There’s no theories about what aliens want or if they’re even aliens at all, we just talked about the things that she’s seen since she’s been a little girl. UFOs are real to her as planes in the sky are to you and me.

That’s the idea behind this week’s song. It must be a devil of a struggle to see things that most other people wouldn’t believe, that she herself would have a hard time believing if her sister wasn’t there with her to share the experience. When you see something that other people don’t, either they’re blind to it or you’re crazy. That’s gotta drive you mad and what can you do about it? You can tell other people right away, but what if they don’t believe you?

That’s scary for a little girl but even scarier for an academic, where UFOs are often treated as a joke. You might have to wait until you’re older and established to reveal yourself. When you’re faced with something like that, all you can do is just soldier on and “Keep Looking Up”.

And how do you explain all the things you see?
From why the sky is blue to the flight of a bumblebee
well I don’t think you can, but I don’t doubt you believe
that you can trust your senses, that you’re not crazy.

Now just imagine there’s something that you know is real
something that you’ve seen your whole life, but something no one else can feel
would you hold it as your secret and always keep your truth concealed
or would you let yourself be ridiculed with a big reveal