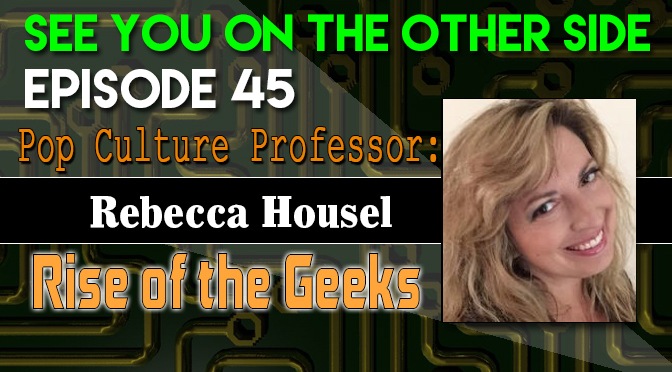 This week’s episode features Dr. Rebecca Housel, the Pop Culture Professor, who is an author, speaker, and professor of writing at Nazareth College. She’s written books like True Blood and Philosophy and The X-Men and Philosophy, in addition to being a panel moderator for Wizard World for several years.

Mike and Wendy kick off their own conversation in the beginning by catching up a little bit on their week and discussing Mike’s weird dream of running a marathon dressed in a Freddie Mercury unitard.

And then the interview with the Pop Culture Professor begins as Mike talks to Dr. Housel about her identification with The X-Men as a girl, because it was one of the only comics to feature female characters as equals to their male counterparts. That leads her to a short discussion of working with Stan Lee on various panels and how  she learned that the original name for The X-Men was not so mono-gendered, but it was to be known as The Mutants. One of Marvel’s editors in the 1960s was convinced that it would sell better with “X” in the title, so that’s why they changed it.

From there, they discuss how she became known as Professor Pop Culture. In her classes, she started using examples from movies, comics, TV shows, and modern books to get her students more interested in their writing and all of a sudden it became one of the most popular classes on campus.

Shortly after, she started writing books connecting cult entertainment with larger philosophical themes and got a job as a panel moderator at Wizard World, working with everyone from Stan Lee to Michael Madsen to Joss Whedon. She tells a few of her favorite stories (including flirting with Mister Blonde and openly weeping at meeting Ron Glass, Shepherd Book himself!)

The conversation then turns to the rise of “geek culture” in today’s media landscape (nothing’s more popular than comic book films in the Two Thousand and Teens) but also how it came to dominate the latter part of the Twentieth Century, how thoughtful entertainment triumphed over less challenging fiction, and the impact of 9/11 on the modern landscape and the popularity of zombies and post-apocalyptic scenarios (and the interesting cycle of villainous zombies turning to sympathetic monsters over time.)

They then discuss the history of the paranormal in popular culture and how it even began with the invention of Lillith in the original Hebrew creation story. That’s right, Adam had a first wife and he got rid of her because she was sassy, being his equal (made from the same clay) instead of his subordinate (made from his rib!) She became the original vampire who had threatened Adam’s future children when she left Eden and the word “lullaby” actually comes from the Hebrew phrase for “Lillith, go away.”

This moves onto Kali, whose worshippers are the famous Thuggees from not only Gunga Din but also as the fearsome antagonists in Indiana Jones and The Temple of Doom. Dr. Housel explains the concept of Kali and how she’s been misrepresented in pop culture through the years.

The final part of the interview is about Doctor Housel’s own strange paranormal encounters and a little bit about why the Ghost Hunters and paranormal TV shows have dominated cable networks over the past few years.

This week’s song: “Catfished From Space” by Sunspot

I met her in an X-Files chat,
joking about first contact.
And we talked all night about disclosure and abductees.We had so much in common,
We bonded on Blake’s 7,
She sounded like the perfect fracking geek.She found me every night online,
with a DM and a bottle of wine,
She knew it all from Aliens to Zardoz.

She said she was an ET,
which was really sexy to me,
And I thought it was just a big joke because

She said she was from Alpha Centauri,
I thought that was a code for a town in Missouri.
She used to joke about ruling the human race
That’s when I got Catfished from Space.

She said she’s an otherworldly monster,
That would come to Earth to slaughter,
but that she would do her best to help me to survive.

I didn’t care if she was pretty,
I knew she was the girl for me,
when she said her favorite cookbook was ‘To Serve Man’

Scheduling a meet up,
so that we could hook up,
She said she had the perfect place to land.

She said she was from Alpha Centauri,
I thought that was a code for a town in Missouri.
She used to joke about ruling the human race
That’s when I got Catfished from Space.

When I woke from where I lay,
It was like Independence Day,
A big V mothership right over my town.

The army put up quite a fight,
But was gone by Dawn’s early light,
that was the day Humanity went down.

It’s not quite happily ever after,
because the planet’s a disaster,
I’m the human pet that’s closest to her hearts.

It’s like Battlefield Earth you know,
post-apocalyptic scenario,
I just wish I’d believed her from the start.

When she said she was from Alpha Centauri,
I thought that was a code for a town in Missouri.
She used to joke about ruling the human race
That’s when I got Catfished from Space.