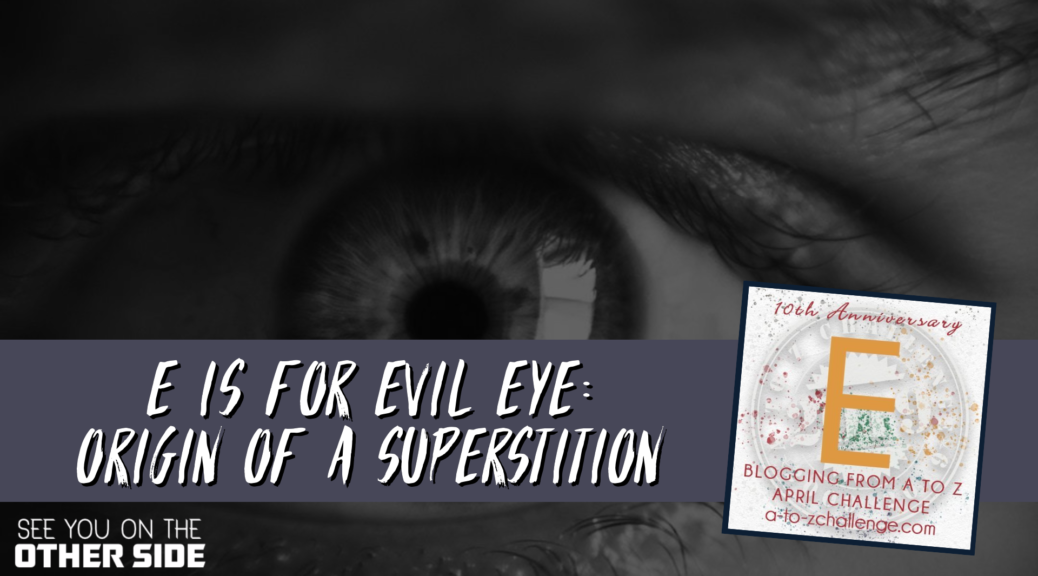 In the 1800s, Italian immigrants brought their hopes, dreams, and superstitions with them to the New World. Among these was the belief in an Evil Eye, the “mal’occhio” (MAL-OAK-EE-OH). According to Italian folklore, stragas(witches) could use this power at will. But even a normal person gripped by jealousy was believed to be capable of cursing you.

And, where there’s a curse, the Evil Eye also had a cure. Victims of this ocular curse were diagnosed using a basin filled with holy water and a bottle of olive oil. The basin was placed before the afflicted while an incantation was recited. The olive oil was then poured into the water in the form of a cross. If the cross of oil remained, you were fine, but if the oil dispersed, you were cursed!

Of course, if you didn’t want to perform this ceremony yourself, you could always consult an evil-eye doctor. The evil-eye doctors were believed to have cured countless victims through prayer and the laying on of hands, but the exact ritual they used to cure their patients is still unknown. It was only passed down through families once a year, at Midnight on Christmas Eve. At any other time, the ritual would lose its power to cure. Today, the evil eye doctors’ cure is still a secret.

If you’re wondering, the concept of the evil eye was not confined to Italy. In other parts of the world, belief in the evil eye is still strong, and people wear talismans to protect themselves, such as necklaces and bracelets.

While an evil eye curse isn’t a common thing these days, the effects of the belief in mal’occhio can be seen in modern popular culture. It’s likely you’ve seen the hand sign that people use to protect themselves from the evil eye, but probably thought it represented something else like partying or Rock n’ Roll. The late Ronny James Dio a heavy metal musician who once played with Black Sabbath, claims to have popularized the use of this symbol during rock concerts. After Ozzy Ozbourne left Black Sabbath, the rest of the band felt very competitive with him and his solo career. They noticed that Ozzy would often use the double peace sign, more commonly associated with Richard Nixon, during his shows. During their Heaven and Hell tour in 1980, they thought, “We need a hand sign that represents us!” That’s when Dio says he suggested the hand sign taught to him by his Italian grandmother.

Dio believed it was thought to work when the two outstretched fingers served as lightning rods to suck up the negative effect of mal’occhio. However, it is more probable that like the little golden horn so often worn by Italian men, the horn-like hand placement represents the male symbol of the bull. One mal’occhio researcher believes that the fear of the evil eye has its origins all the way back in ancient Mesopotamia. He believes it stems from a change in the way people worshipped the goddess. Originally goddess idols were very rotund, grossly emphasizing the torso. Then suddenly goddess idols drastically changed. They became thin with grossly exaggerated eyes. He believes that mal’occhio represents the all-seeing eyes of this goddess. In that case, using the male symbol of the bull to protect yourself makes more sense. Perhaps the male energy is meant to deflect the female power of mal’occhio.

If you’re not a fan of Rock and Roll, or you don’t ever find yourself at odds with an Italian, you aren’t in the clear. If you have ever been to an optometrist for an eye exam, you have crossed paths with the evil eye. In fact, according to optometrists, we all have an evil eye. More specifically, it’s our left eye, which, in eyeglasses prescriptions, is noted as “OS” (the right eye is noted as “OD”). OS is an abbreviation of the Latin term Oculus Sinister, or “evil eye” (OD is short for oculus dexter, the right eye).

Sinister is literally the Latin term for “left”, but owing to Old World superstitions, left-handed people were considered evil—and thus the term sinister came to mean something bad, or evil.

Remember that the next time you go to pick out a new set of frames.

To learn more about the Evil Eye, check out our episode “CURSES: FROM EVIL EYES TO JINXED BUILDINGS”!