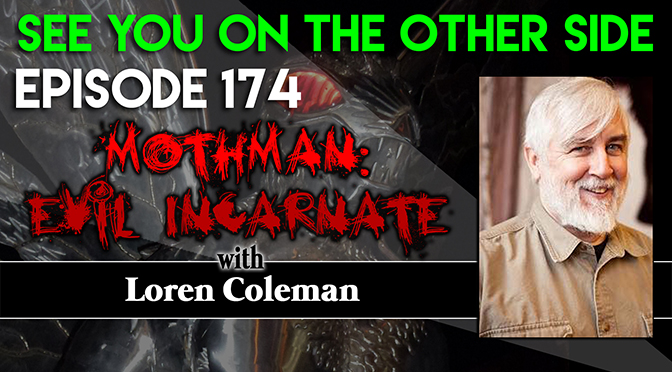 This week we have two 50th anniversary tragedies that we talk about on the podcast, one musical and one paranormal. The first is that in Madison we’re acknowledging the half-centennial of the death of Otis Redding, whose plane crashed into Lake Monona on December 10th, 1967. He was only 26 years old, just a year off the cursed 27 Club.

The second tragic anniversary has many more overtones of high strangeness. The Silver Bridge collapsed in Point Pleasant, West Virginia on December 15th, 2017 thirteen months to the day after the first reported sighting of the Mothman.

The Mothman was a winged humanoid with red eyes that people were seeing in the area as well as getting an overwhelming sense of dread.  Once the mothman sightings started happening, other paranormal events began rearing their head. Reports of Men in Black, UFOs, prophetic dreams, and a strange grinning man by the name of Indrid Cold started circulating and everything culminated in the tragic Silver Bridge collapse that killed 46 people on December 15th, 1967.

Researcher John Keel famously collected all these stories and really created the modern narrative of the Mothman with his book, The Mothman Prophecies, in 1975.  It famously becomes a big Hollywood movie in 2002. When Keel became unable to do press for the film, he called upon his old friend  Loren Coleman to handle the interviews.

Now to say that Loren is a noted cryptozoologist is an understatement, he’s one of the most respected researchers in the field and I’ve been reading his books for decades. He wrote Mothman and Other Curious Encounters in 2002 and even John Keel called it “the most complete overview of the phenomenon.”

Fast forward to 2017 and the Mothman is back in the headlines. This time with alleged sightings all over the Chicagoland area. Allison from Milwaukee Ghosts has been going to the location of the sightings that have been reported and creating videos of the area to help people visualize them. It’s an eye opening look into the painstaking investigative process. Check out her YouTube channel to see her dozens of on-location videos at http://www.youtube.com/mothman.

The anniversary of the Silver Bridge collapse, December 15th, is also  Loren Coleman’s latest book comes out , Mothman: Evil Incarnate. The Mothman hasn’t been content to be in the shadows. Loren talks about the Mothman Death Curse and the misfortune that seems to surround people who find themselves investigating this strange phenomenon decades after the original incident, book, and movie.

This episode is not only a great primer in the history of the Mothman case, but it’s also an insightful look into how Loren Coleman became one of the world’s greatest cryptozoologists as Allison and I get to discuss his investigative process with him.

To get a signed copy of Mothman: Evil Incarnate, click here to buy a signed copy from Loren’s awesome International Cryptozoology Museum in Portland, Maine.

In the episode, we also talk about Wendy’s visit to the Mothman museum in Point Pleasant, West Virginia and her pilgrimage to the new Silver Bridge. Wendy watched The Mothman Prophecies and listened to the original book this summer on a roadtrip and you can check out her reactions above as part of Scott Markus‘ fun video series “A Ghost Hunter Watches”.

One of the things that was surprising about the Mothman story is how UFOs and weirdness seems to occur in Point Pleasant as well, it’s like they didn’t just get one X-File, they got the whole cabinet. Indrid Cold was a mysterious character who showed up during the events and asked people about the lights they saw in the sky. He made mysterious phone calls to Keel, talked to the local reporter, and even was said by one report to speak to someone telepathically.  He was so smily and strange, they called him The Grinning Man.

We don’t feel there’s been enough attention given to Mr. Cold so for this week’s track, we decided to write him his own song. This is Sunspot with “The Grinning Man”.

a thin veneer
hiding a zone of fear

a banshee screams
burned right into your dreams

a thin veneer
hiding a zone of fear