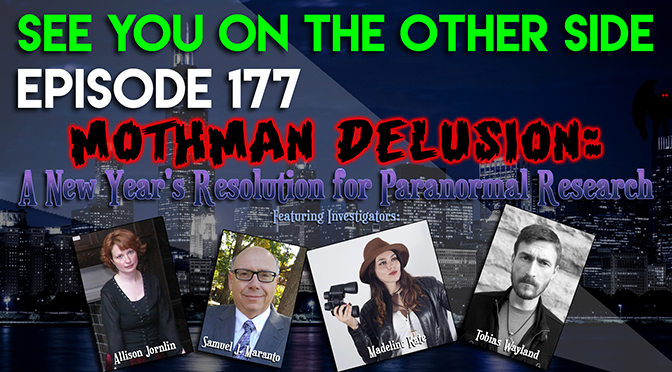 The biggest paranormal story in the Midwest in 2017 was the winged humanoid sightings over Chicago and we have covered the Chicago Mothman extensively over the past several months. First in episode 159, we interviewed the editor of Phantoms and Monsters blog where many of the Mothman sightings have been reported, then we brought on the great cryptozoologist Loren Coleman who just released a new book Mothman: Evil Incarnate.

What’s the Mothman? A dark winged humanoid with glowing red eyes, made most famous by a series of sightings in Point Pleasant, West Virginia in the late 1960s. The sightings were followed by UFOs, Men in Black, and a tragic bridge collapse 13 months after the initial sighting.

Fast forward to 2017 and the Mothman has been reported seen over the Chicagoland area dozens of times mostly to a blog called Phantoms and Monsters. My sister Allison has been looking at the stories and then doing investigations of the sites of each reported sighting over at her YouTube channel, http://www.youtube.com/mothman.

As she was digging she found inconsistencies in more and more of the accounts even going so far as having a private investigator look into a possible police report that was a featured account over the Summer. (She didn’t find it and either did the Chicago Tribune.) Plus, 3 out of the 4 Mothman reports that came into Illinois MUFON came from the same IP address (meaning same Wi-Fi network, meaning the same house.) She began to get skeptical whether or not there really are winged humanoids flying over Chicago.

For her efforts, she’s been interviewed on Midnight In The Desert  and featured on the Mysterious Universe blog, but needless to say it hasn’t made her popular with the Chicago Mothman investigators. So for this first episode of 2018, we wanted to give the Chicago Mothman one more discussion because it was such a big story around these parts. Sure, we’ll come back when there’s a “break” in the case, but the important part is that in this episode we talk about our renewed resolve to use the scientific method in our paranormal research (and Patrick Swayze, but you’ll have to listen to figure how he fits in!)

Joining us for this discussion are two Chicago Forteans, Madeline Kate from Measuring The Circle podcast and Sam Maranto, the state director of Illinois MUFON (who received some of the original reports!) Allison Jornlin of course is involved, as is Tobias Wayland of the Singular Fortean Society, who has been collecting the Mothman stories as part of the original Chicago Mothman Taskforce – he even shares a Mothman story from Rockford that he interviewed the witness personally!

It’s a good frank discussion about the Chicago Mothman – doubts, inconsistencies, disinformation campaigns, hoaxes, and all, as well as how we can try to all get along better as Fortean researchers.

UPDATE: Here’s an extra interview with a Mothman researcher (and Chicago native!)

And for this week’s song, we used some inspiration from good old Carl Sagan, the man who coined the phrase “extraordinary claims require extraordinary evidence”. His book The Demon-Haunted World: Science as a Candle in the Dark is a treatise on the scientific method and critical thinking. Yeah, it’s a buzzkill but if we’re ever going to convince the skeptics we gotta take getting the facts seriously. Here’s Sunspot with “House of Cards”.

It’s a demon-haunted world
and you don’t get to dig a grave in my backyard.
you know we have to be the candle in the dark
You can’t build a dynasty on a house of cards.You might think that you’re a monster but you’re just a quack
talking a lot of smack setting the whole field back
a lotta tall tales comin piling up to nothin
looking for the clicks and acting like like a d$%@.

it’s a curiosity, all this privacy
anonymity, who can you believe?
You can tell me all day ‘bout the trash you heard
doesn’t matter how absurd unless stand by your word

All this animosity comes down to money
You’re misrepping all the data just to fit your theory
You wanna sell books or you want some truth?
It sure looks to me you ain’t much of a sleuth

It’s a demon-haunted world
and you don’t get to dig a grave in my backyard.
you know we have to be the candle in the dark
You can’t build a dynasty on a house of cards.

Extraordinary claims, extraordinary proof
winged dudes on the roof kinda sounds like a goof
we need a real witness not all anonymous
how bout some testimony don’t sound like baloney.

Detail needs to be there, you know they’re gonna nitpick,
eaten by the cynics, defeated by the skeptics
t’s need to be crossed, you can’t just gloss,
over all the small stuff or things are gonna get rough.

Gotta share the data, info wants to be free,
transparency, no secrecy,
It takes all kinds of different minds
if we want it to be better, we gotta work together.

It’s a demon-haunted world
and you don’t get to dig a grave in my backyard.
you know we have to be the candle in the dark
You can’t build a dynasty on a house of cards.