Hey!
It’s Mike from See You On The Other Side, just going over some of the coolest news stories we saw this week. Let’s cut to the chase…

The “sonic attacks” that afflicted diplomats at the US Embassy in Cuba could have just been the work of crickets, according to a report Sunday. So crickets are causing hearing damage now? I smell a coverup!

Mysterious fast radio bursts from deep space ‘could be aliens’

Doesn’t mean it’s aliens, in fact, the guy that was all excited about Oumuamua  being aliens, Avi Loeb, is the guy they’re quoting here. Saw this on everyone’s feeds this week, so I thought we should mention it.

Rhianna Shaw made the chilling decision to stop breathing, after an avalanche in St. Anton, Austria, fully encased her in snow.

Remember when CNN was the MH370 Channel? I feel like this news should be a bigger deal. A report from the MH370 Safety Investigation Team said most of the debris recovered was from an aircraft and a floor panel found belonged to a Boeing 777, ‘most likely MH370’.

In an interview, Patriarch Kirill warned against “falling into slavery” to smartphones. Someone call Kirk Cameron before we all get “left behind”!

Speaking of the Anti-Christ, it’s the man that was demonized in the 90s, Brian Warner AKA Marilyn Manson. Naming has band members half after super models and half after notorious killers, the man has never been accused of good taste. Is he still shocking? I dunno, but some of those songs are still excellent! Here’s the title track of his breakthrough album.

If you missed our conversation earlier this week, we talked about the Lost Franklin Expedition, the Doomsday Clock, new horror films based on real-life ghost stories, and Britain’s most famous UFO incident. You can listen to that episode right here.

New episode out late Monday night, so we’ll see you on the other side of the weekend!
Mike 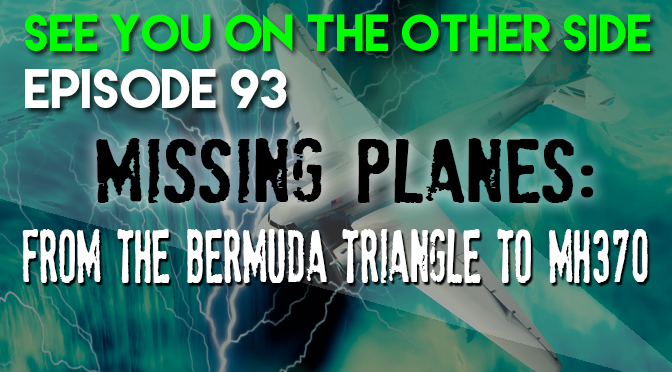 Before the wreckage of this last week’s crash of EgyptAir Flight 804 ended the mystery surrounding what happened to the Airbus A320, cable news immediately jumped on the story. Missing planes are big business. Traveling in the modern age means flying, and flying means getting in a metal cylinder and hurling through the sky at hundreds of miles an hour. For myself, it’s the surrender of control that makes it terrifying. Not that I know how to fly, but I’m at the mercy of the pilot, someone I don’t usually even see. My life is in his or her hands, that’s a lot of trust to place in someone that you don’t know, only reassured by the fact that their lives are in their hands as well and whatever happens to me, happens to them. So that helps. And also knowing that your chances of dying in an airline crash are extraordinarily low, you’ve got a better chance of being struck by lightning or bitten by a shark than going down in a plane.

Now what happened to EgyptAir 804 was probably terror-related (they were already in Cairo airspace when they just turned around for seemingly no reason), but since aviation has only been with us for a little over a hundred years, we have an excellent record of its history. Missing planes are news now because it happens so infrequently. And when it happens, when all the safeguards humans have created to protect themselves during air travel fail, then it’s a big deal. But what if it’s something more than just human or mechanical error, what if it’s something paranormal in nature?

The most recent flight to disappear was Malaysian Airlines Fight 370. Taking off in Kuala Lampur, the flight was supposed to land in Beijing, but never did and was said to have crashed somewhere in the Indian Ocean. The mystery behind that missing plane lasted for months until a piece of wreckage washed up on an island near Africa in the Indian Ocean.

Conspiracies abounded from Flight 370 from North Korea shooting it down to a CIA coverup to the plane being commandeered to land in Russia. Of course, 5% of people even believed that it had something to do with aliens or supernatural activity.  Those people are my favorite. But reliable aviation experts and different authors have challenged the authenticity of the debris, saying it was planted. A new photo that showed up last week has made the veracity of the wreckage more likely, however, and as the public slowly loses interest in the flight, the final mystery might never be solved.

But the most famous place that planes have disappeared has to be the Bermuda Triangle. The three corners are Miami, Florida, San Juan, Puerto Rico, and the island of Bermuda in the mid-Atlantic Ocean. Popularized by author Charles Berlitz in his 1974 book, The Bermuda Triangle.

The most famous case of disappearing planes over the triangle comes from December 5, 1945. Flight 19 was a bombing training mission run by Lieutenant Charles Taylor, a flight veteran. Their compasses ended up not working, the planes got lost over the mid-Atlantic and five planes and 14 men were lost at sea and never found. Later, they sent out another plane (a flying boat) to go search for the missing planes. Those 13 men and that plane were never recovered either. 27 people lost in one day. Steven Spielberg would later use this in Close Encounters of The Third Kind as the planes are discovered in the desert and later their pilots are returned to Earth by peaceful alien captors.

Berlitz found several incidents of missing planes over the Bermuda Triangle, particularly in the late 1940s (one case even happening on July 3rd 1947 – the date of Roswell! A topic that Berlitz also wrote a book on). By the late 1970s, the Bermuda Triangle was a well-known paranormal topic. When there was no concrete evidence as to why planes might go missing over the area,  Berlitz wasn’t ashamed of throwing in paranormal explanations (it was the 70s, man.) He even theorized that the sunken city of Atlantis had something to do with it!

Just as fast as the topic took off, though, the Coast Guard was trying to debunk it. They even have an entry about it in their official FAQ.

While there has been several movies to tackle the Bermuda Triangle directly (the most famous starring Hollywood royalty, John Huston) and The X-Files’ episode “Triangle” as well as The Greatest American Hero‘s “Devil And The Deep Blue Sea” did investigations into the mysterious area, the most famous piece of pop culture with a missing plane took place in the Pacific Ocean and not the Bermuda Triangle. Oceanic Flight 815 left Sydney, Australia for Los Angeles in 2004 and was never found. That gave us LOST, a mid-Aughts cultural phenomenon that changed the way that we watch television.

Serials, where one episode of the story leads into the next and need to be watched in sequence, was not very popular with television producers for a long time. Why? Because it made it so you had to see every episode in order to “get it”. It was much easier to produce something where a viewer could casually come in and out and miss episodes. In the 1970s that made a lot of sense. When homes started getting VCRs in the 1980s that trend could change, but still people had trouble programming them (i.e., my parents).

In the 2000s, with the popularization of DVRs and a generation of people who were comfortable with the technology, you could finally create a series where you could trust that the episodes were watched in the correct sequence. You could create longer and more complicated storylines, like chapters in a novel. Whether LOST accomplished that during its six-season run is debatable, but it certainly popularized the story of a missing plane and the supernatural hijinks that happened around the survivors on a mystical island.

While LOST provided a happy ending for at least some of the passengers (SPOILERS!), unfortunately we cannot be certain about the real tales of missing flights. As we recorded and wrote this, Egyptian authorities still haven’t found the  full wreckage of flight 804, all of the human remains of Flight 370 are still nowhere to be seen, and of course, Flight 19 has been gone for well over half a century.

While The Bermuda Triangle might be bogus, the fear of flying has affected everyone from Isaac Asimov to John Madden (who always drives to football games across the country in a special RV.) The modern cable news obsession with missing planes only serves to heighten this fear and it almost makes me long for the days when the most sensationalist piece of television was In Search Of… something that never masqueraded as news.

This week’s song was inspired by the tales of lost airmen and boat crews in the nefariously nicknamed, Devil’s Triangle.

You see a light,
when you’re in the deep,
just on the surface,
somewhere above your reach.
But you’re too far, to be found.

It’s not a Kraken that will sink your Battleship
You could get snared by a Calypso and not even know when you’ve been whipped,
Triangle.
It’s not the sharks who will devour when you drown,
It’s the chicken of the sea that will pull you all the way down.
Triangle.

You see a light,
when you’re in the deep,
just on the surface,
somewhere above your reach.
But you’re too far, to be found.

It might feel like it’s a joyride,
heading toward Davy Jones.
But it’s a doorway to the dark side,
that will leave you skull and bones.
Triangle.
It doesn’t matter, Atlantean or Amazon,
your eyes stay open as you suffocate
gutted and gorged upon.

You see a light,
when you’re in the deep,
just on the surface,
somewhere above your reach
But you’re too far, to be found.