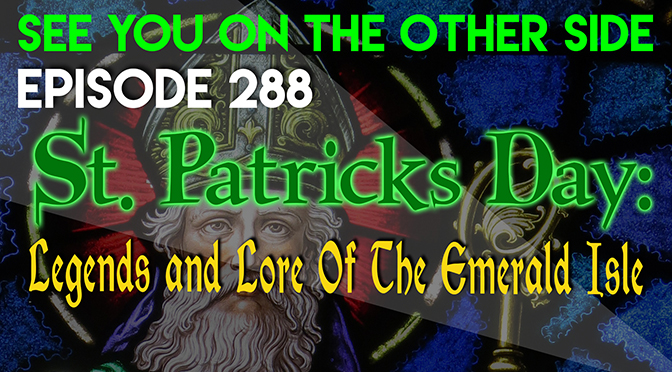 Every year on St. Patrick’s Day, we all hear the story of St. Patrick so we know it by heart, right? Even before most of us were old enough to slurp cheap green beer and scour the streets in search of Jameson, we knew the story of Ireland’s most famous Saint. He used the shamrock to explain to the Pagan Celtic heathens the mystery of the Holy Trinity (three leaves in one shamrock equal the Father, Son, Holy Spirit all God) and he banished all the snakes from Ireland, right?

Not quite, bucko. Patrick was way cooler than that.

Just in time for St. Patrick’s Day, we set the record straight on one of Ireland’s favorite saints in this episode celebrating his Feast day and some of our favorite Irish creatures.

If you’re looking to learn about Irish legends, faeries, and cryptids, one of the perfect places to start is Lady Lady Francesca Speranza Wilde and her book Ancient Legends, Mystic Charms, and Superstitions of Ireland. She wasn’t only a remarkable researcher, writer, and suffragist, but she raised literary giant Oscar Wilde . Even better since her book is in the public domain, you can read the whole thing right here.

Wendy took a dive in to talk about the legend of the banshee, which is steeped in the Celtic tradition of “keening” where a woman or group of women wail a lament over a dead body as part of the burial and grieving process. The banshee would be a premonition of the “keening woman” and it would signal a death in the family, sometimes in the form of an innocent virginal sister of the family who died early.

Banshees could also be a type of fairy and Irish legends are full of those as well, including the Phouka and the Kelpie. The Celtic word for the fae is Sidhe (pronounced “she”). Of course that includes everyone’s favorite, leprechauns, whose legends have even made it off Earth and into (ahem) outer space.

Scott Markus from WhatsYourGhostStory.com once again joins us to talk about the Hellfire Club, an Enlightenment-era Eyes Wide Shut-style party group whose ritualistic orgies that even Jonathan Swift (of Gulliver’s Travels fame said were “a brace of monsters, blasphemers and Bacchanalians”. Hellfire Club rumors include a huge black cat that haunts the grounds as well as stories of Satanic Black Masses where unwary passers-by were left scarred for life. In reality did they worship the Devil? Probably no more than the modern Church of Satan does, they were just rich pr!cks who wanted to party with no rules or repercussions.

It sounds like it was a lot more like Donna Tartt’s The Secret History than Ira Levin’s Rosemary’s Baby, which is actually more frightening. It’s Satan’s job to ruin people’s lives, with humans, it’s our choice.

Ireland is a place where it feels like anything can happen and the fanciful folk tales are legion, we also discuss:

For this week we decided to create some Irish jigs inspired by our discussion of Irish legends. This “trad set” includes three original tunes by Sunspot: Druid’s Duel, Lady Wilde’s Fetch, and The Fairy Rath! 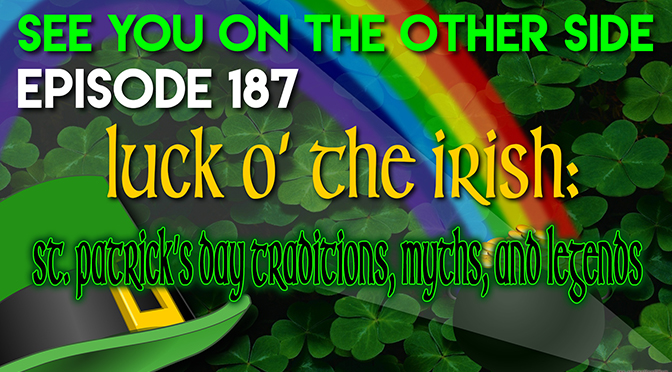 I don’t know when St. Patrick’s Day turned from a sweet celebration of a wonderful culture into an excuse for binge drinking  (a Guinness holiday instead of a Hallmark one?) , but I think it was at some point in my lifetime. Before it used to be just about wearing green, running in the almost Spring grass looking for four-leaf clovers, eating Lucky Charms, drinking Shamrock Shakes, and of course, watching wonderful family films like Leprechaun.

But seriously, St. Patrick’s Day is flush with weird legends and myths of the patron saint of Ireland. The story of St. Patrick is that he drove the snakes out of Ireland (metaphor for Pagans), Christianized the country, and he used the Shamrock to help explain the Holy Trinity of the Father, Son, and Holy Spirit.

The Irish culture has plenty of fun superstitions, but luck of the Irish, pinching people on St. Patrick’s Day, and turning their rivers green aren’t any of them. Join us for a conversation on where all our silly St. Patrick’s Day traditions come from and some of the real history of St. Patrick’s Day as well as legends and myths about the Emerald Isle’s patron saint himself.

One of the strange stories we talk about in the show is this weird shadow that’s cast by Saint Patrick at this New Jersey church. Sure, it’s just a coincidence… OR IS IT?!

It’s a good time as any to bring out one of our favorite Irish songs done by an amazing Irish band. Thin Lizzy wasn’t in love with getting famous through an Irish folk song, but their version of “Whiskey In The Jar” made it a Top 40 hit all over the world. We do an acoustic guitar and violin version of it that you can request at the next Sunspot Acoustic Duo show or See You On The Other Side live event!

As I was goin’ over
The Cork and Kerry Mountains
I saw Captain Farrell
And his money, he was countin’
I first produced my pistol
And then produced my rapier
I said, “Stand and deliver or the devil he may take ya”

Being drunk and weary
I went to Molly’s chamber
Takin’ Molly with me
But I never knew the danger
For about six or maybe seven,
Yeah, in walked Captain Farrell
I jumped up, fired my pistols
And I shot him with both barrels

Now some men like a fishin’
But some men like the fowlin’
Some men like to hear,
To hear the cannonball roarin’
Me, I like sleepin’,
‘Specially in my Molly’s chamber
But here I am in prison,
Here I am with a ball and chain, yeah