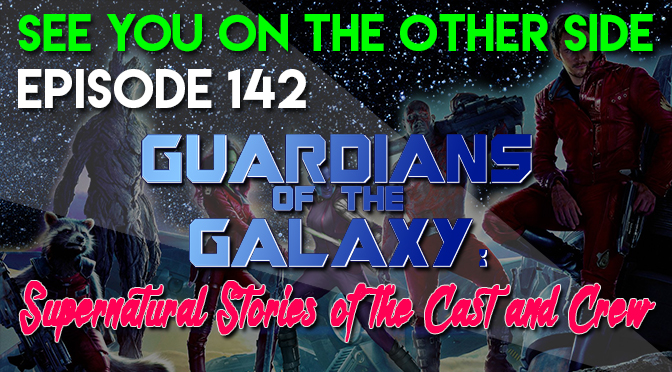 Guardians of the Galaxy was one of 2014’s biggest surprises. A fun cosmic romp set in a part of the Marvel Universe that I didn’t even know existed, it was a breakthrough for everyone involved. Lead actor Chris Pratt established himself as an A-list star that could topline a movie, James Gunn was finally given the budget he needed to make his wild fantasies come true, and a team of intergalactic misfits that few moviegoers had heard of ended up besting the tried and true Captain America at the box office. It captured that old Star Wars spirit of swashbuckling sci-fi imagination.

Three years later, the sequel has arrived and is coming out in the U.S. Friday May 5th. A big ensemble movie like this has a huge cast and we picked some of our favorite paranormal stories where we could find them to talk about this week.

This was the big one that came out this week, Kurt Russell, who’s on the press tour for Guardians of the Galaxy 2 and plays Peter Quill/Star-Lord’s father in the movie (a character hinted at in the first film) was the pilot who reported The Phoenix Lights. Yeah? Snake Plissken himself is the pilot that was flying into Phoenix and reported the lights to the air traffic controllers for the first time.

Interestingly enough, it’s not the lights that made him question his sanity. It was the fact that he didn’t remember it or think about it again until some years later when his longtime companion Goldie Hawn was watching a TV show that mentioned The Phoenix Lights. Alien abductions are almost always reported with amnesia, could the aliens have made Kurt “forget” about what he saw in a subtle way, where he only even thinks about it when he’s directly confronted by what he saw years later? It’s a cool and almost unbelievable story.

Vin Diesel (the voice behind “I Am Groot”)’s ghost story is a little sadder, The National Enquirer posted that he saw his friend, Paul Walker’s, ghost on the set of the latest Fast and the Furious film.

Writer and director James Gunn has a great blogpost about infiltrating the Raëlien UFO cult Happiness Seminar in Las Vegas and how it really seemed more like it was about people trying to get laid, and it makes me sad that another science fiction cult just ends up being obsessed with sex.

Karen Gillan, plays the evil Nebula and in an old Doctor Who Confidential, she admits that she was obsessed with paranormal stuff when she was younger and even had a weird experience in high school. They go for a little ghost tour while they were filming the episode “The Rebel Flesh” in Wales and learn the ghost story of the Green Lady of Caerphilly Castle.

Michael Rooker alway seems game for a good time in a genre picture whether he’s the the blue skinned mohawked guy with the whistling arrows Yondu in Guardians of the Galaxy or the wicked redneck Merle in The Walking Dead or the deeply disturbing lead in Henry: Portrait of a Serial Killer, he’s a horror and fantasy favorite!

Rooker even directed a horror movie in the Pennhurst Asylum (originally called the Eastern Pennsylvania Institution for the Feeble-Minded and Epileptic)! It has several names (the mark of a great movie, yikes!) but it’s known as Pennhurst, Asylum of the Dead, or The Lost Episode depending on where you’re looking for it. Of course, old asylums definitely have a creepy vibe to them and our former guest Christopher Saint Booth also had strange paranormal experiences while filming his filming Death Tunnel at Waverly Hills Sanitarium.

Of course, Pennhurst has haunted stories of its own and actress Beverly Mitchell had her own experience in the old asylum when she was filming the movie and she tells the whole story in Celebrity Ghost Stories. (You’re not in 7th Heaven anymore Beverly!)

While that story might have been very earnest, the ones about Sylvester Stallone (who has a cameo in the new Guardians film as well!)  are of a little more of a questionable veracity. For some reason, you can find an article about how he was haunted by his son who tragically died in 2012 and needed to get an Indian spiritual cleaning, which feels like some kind of exploitative fake news.

While that’s a little sad, this next one is just ridiculous (yes, even more ridiculous than this silly Snapchat video about Chris Pratt’s haunted toilet in a Manhattan hotel room.) Sly’s mother, Jackie Stallone, turned being a celebrity mom into an industry by having her own psychic hotline in the 1990s, but you might not believe this 2010 article from Week In Weird, about something called Rumpology where she will tell you your future by looking at a picture of your butt.

That’s right, she’ll tell you your future for $125 by looking at your butt. For that alone, this is an episode you probably want to download and listen to immediately.

One thing that really stood out about Guardians of the Galaxy was Peter’s classic rock “Awesome Mixtape Vol. 1”, so for this week we thought it would be perfect to play our own goofy Classic Rock-inspired anthem, “Turn On The Hi-Fi”.

The below video is a live version of the song from a Milwaukee show, but the live version in the actual podcast is from  January 2015 where our friend Jim Chiello from Power of Sound was the engineer and mixed our set and then worked hard on our performances to make an awesome live recording for us!

Strap on any old guitar and crank that thing up until your ears bleed, you just need,
That bass drum in your soul, it don’t matter if you look like an @#$hole, your body’s freed.

You’re dancing with the devil, man,
Record needles full of adrenaline.
I got the spirit, Can I get an amen?
There’s nothing like turning it up to ten.

Whip it out and let it rip, hold on tight you’re on the rocket ship, it’s a trip,
to blast off with the sound, and jump up like you’ll never hit the ground, let’s get blitzed.

And dance with the devil, man.
Shoot me up full of adrenaline.
I got the spirit, Can I get an amen?
Feels so good, it’s gotta be a sin.