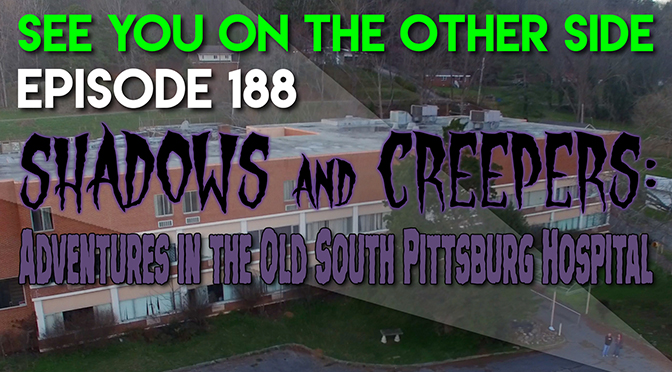 This week we take the show on the road by visiting the Old South Pittsburg Hospital whose manager we met at the Haunted America conference in Alton, Illinois last Summer. After hearing stories of the shadow beings, Electronic Voice Phenomena, and variety of paranormal characters, we knew that we had to go on location and see the hospital itself.

When we got there, we were greeted by the fine people of the Paranormal Free Agents from St. Louis, Missouri and they graciously allowed us to tag along with them on some of their ghost investigation. That’s where we had our first weird encounter of the evening.

After exploring for a bit, we interviewed the delightful Stacey Hayes from Old South Pittsburg Hospital Ghost Hunts. We spent some time talking with her and the history of the place.

Interesting enough though, once we were done talking with Stacey we started getting stories from Pete and Larry from Starr Mountain Paranormal Research and Investigations. They mentioned that they saw three shadowy figures in the hallway behind us who were interested in what we were talking about. That was a pretty chilling moment (even though we didn’t get to see them for ourselves!)

Afterwards, we wandered the halls ourselves, and even shot a music video in the hallway where Larry and Pete have seen the mysterious tall shadow man passing through!

Go for your own ghost hunt at the Old South Pittsburg Hospital by clicking here to visit their website and scheduling a haunted overnight stay!

When we were in the hospital, they told us about a Dr. Havron who is rumored to have performed unnecessary surgeries at the hospital. While I couldn’t find anything about that in our research, his first wife was murdered at home in 1964 while he was on duty at the hospital. The police said that it was someone with intimate knowledge of the house and that none of her valuables were missing. The killer was never found and the house where the murder took place was said to be haunted by her spirit as well. While Dr. Havron passed away in 2006 as a fairly beloved member of the community (according to his obituary and some nice things people have said about him online), urban legends have a way of taking root especially when there’s ghost stories involved. And that’s where we took inspiration for this week’s song, “The Evil Doctor H”!