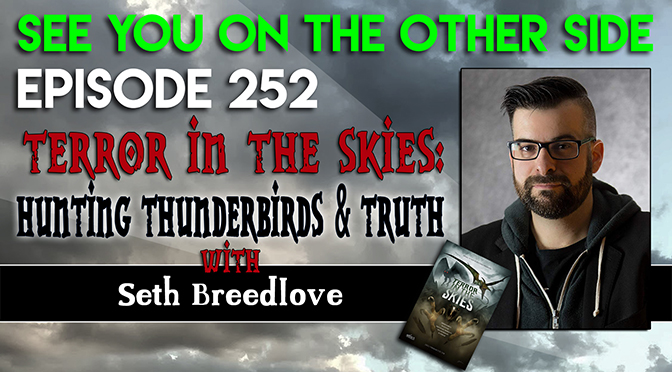 My skeptical take on the Chicagoland Mothman flap has confounded some, but thankfully Seth Breedlove from Small Town Monsters decided to include an interview with me in his new film anyway. Entitled Terror in the Skies, the documentary explores historic and contemporary reports of winged weirdies over Illinois. At the time of this writing, Terror in the Skies has recently become the # 1 documentary film new release on Amazon Prime.

So why did Seth include me in his newest movie? I definitely should have asked him that question! We’ll maybe because he understands that I’m not actually a noisy negativist, as we joke about in this interview. Maybe he understands that I really care about the advancement of the paranormal field and that’s why my expectations are high.

I do expect investigators to check witness statements against basic facts. Far from excluding the incredible, vetting witness reserves an important a place for the truth, above and beyond the everyday muck. If every claim is treated the same and given the same importance, you’ve uncovered nothing but mud. It becomes nearly impossible to tell what is real and what is a hoax.

If something truly incredible has occurred, you better believe those who protect the status quo will try to hide it in plain sight. Just how do they do that? Disinformation.

Authentic phenomena may have occurred during this Chicagoland Mothman flap, but how will we ever know? How will we ever find the proverbial needle in the haystack, if the haystack itself is entirely constructed of momentarily convincing replicas, but ultimately fake needles?

That’s how disinformation works. It’s simple. It’s easy. It’s cheap. It’s effective. And it may be what has occurred here.

Perhaps most telling is that not one supposed witness to the Chicagoland Mothman came forward to be interviewed for Terror in the Skies. Elsewhere in the film witnesses share testimony about Thunderbird sightings. Even so many years later, several witnesses still participated in Small Town Monsters’ Mothman of Point Pleasant, appearing on-camera to contributing their eye-witnesses statements. It bears remembering that over 100 witnesses bravely attested publicly to their encounters during the original 1966-67 flap.

So what could that one true anomaly in this mess of the Lake Michigan Mothman saga have been? What might at least one of the reported witnesses actually have seen?

Nearly 20 years ago I interviewed Wisconsin witnesses reporting encounters with strange creatures with impossibly large wingspans. Is history repeating itself? Might these manifestations follow a cyclical pattern? Is there a migratory route that spans Illinois, Wisconsin, and other states.

This certainly comes up in our conversation with Seth in several instances. For example, we discuss the 1977 Marlon Lowe Lawndale, IL case as well as a very similar newspaper report from 1909 in St. Charles, IL. In both cases, birds of unusual size attempt to carry away unsuspecting children playing just outside their homes.

Another example hits even closer to home. Kevin Walkowski, my very own cousin and Mike’s godfather had his own sighting in 1988. I interviewed him and contributed his story to several books including Weird Wisconsin. Kevin’s description which compared the wingspan of this massive bird to a Piper Cub plane still resonates in my memory and was echoed in a witness statement from the Illinois Big Bird flap of 1948 featured in Terror in the Skies.

In fact, tales of such anomalies extend into the prehistory of the Midwest and can still be seen in petroglyphs and vibrant tribal traditions. Something strange flies in Midwestern skies. Keep your eyes on the skies and those patterns that repeat throughout history and we may just uncover something authentic yet extraordinary.

Watch me and Troy Taylor in Terror in the Skies. Listen to this episode. Then visit me, Mike, and Wendy Lynn at Troy Taylor’s Haunted America Conference this weekend. As usual, Mike and Wendy will be bringing the paranormal rock, and this year I’ll be speaking about Midwestern cases of poltergeists and demonic possession.

The song this week is inspired by Seth’s movie and the fantastic legends of the “Thunderbird”! 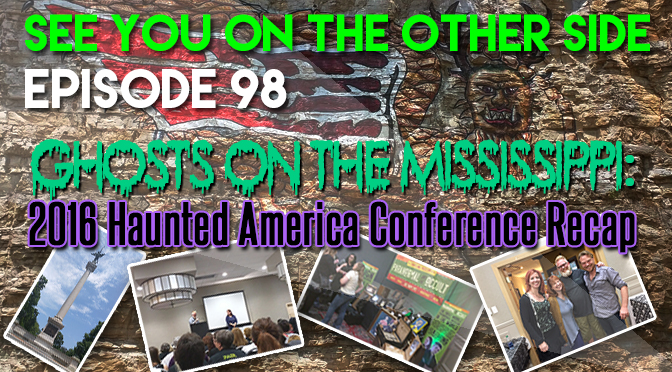 This weekend Allison from Milwaukee Ghosts, Wendy, and I had the privilege to attend the 2016 Haunted America conference in Alton, IL run by one of the Midwest’s spookiest storytellers, Troy Taylor.

We’ve been to Alton, Illinois before. In episode 30, we interviewed one of the area’s haunted tour guides, Luke Naliborski in a live podcast/performance! It’s a small town on the Mississippi River known for being the birthplace of Robert Wadlow, the tallest man in history at 8 feet 11 inches tall! Known as the Alton Giant or the Giant of Illinois, Wadlow was known for his gentleness, but sadly died at only 22 years old. Both Sufjan Stevens and Andrew Bird have played songs about him. But we weren’t there just to feel short, we were there for ghosts, spirits, and all the weirdness that we could handle! Friday night, we got in pretty late so we missed the first panel, but we did make it in time for the masquerade ball. Hands down, the best costume was the shadow people. At the party, we all got to share some stories of paranormal experiences and that was a lot of fun, but my favorite was the theory that “The Titanic was an inside job”! I had never heard that one before, so it was fun to learn a new conspiracy theory. Saturday morning, the first presentation was by Dr. Alan Brown, who regaled the crowd with stories of his visits to haunted bed and breakfasts across the United States. Of course, his most provocative location was the Myrtles Plantation in St. Francisville, Louisiana (and you can hear our in depth exploration of the Myrtles Plantation in Episode 77.)

Up next was Paranormal Sarah , who we also saw at the Paradigm Symposium in May, but this time she focused more on the psychology of why we are attracted to the paranormal.

Rosemary Ellen Guiley took the stage after that and you’ll have to listen to this whole episode to really get our take on it. I’ve been, of course, a fan of Rosemary Ellen Guiley’s books practically since I first started getting into reading about strange topics and her latest obsession is the Djinn, a malevolent force that was banished by God after the creation of man to another dimension. They talk about the Djinn in the Koran and it’s what eventually we would call in the West, genies. But we’re not talking about I Dream of Jeannie here. She uses the Djinn as sort of a paranormal unified theory, that they’re shapeshifters who are also responsible for UFO sightings, Bigfoot, Shadow People, and more.

During the breaks, we kept on visiting the Traveling Museum of the Paranormal and the Occult with Greg Newkirk and Dana Matthews of Planet Weird. From cursed blades to a terrifying idol they call “Billy”, to a strange cursed Appalachian totem and a haunted Ouija board planchette, the museum was a lot of fun and I can’t wait to bring them on the show. One of our favorite objects was the black mirror, that people say if you stare into it, you’ll start getting dark thoughts. So, of course, we had to take a look! After lunch, Troy Taylor came up with his writing partner, Rene Kruze, and he talked a little bit about some of his favorite investigations. It was fun to listen to a master storyteller at work and talk about some of his weirdest encounters. Troy, having founded the Alton ghost tours, is of course a man after my own heart and he also doesn’t trust orbs in ghost photos, so we really have something in common!

Scotty Roberts from the Paradigm Symposium then gave a presentation on his own paranormal experiences in Egypt, while also getting into who might be perhaps the historical Moses. There’s a great article right here where he goes into some depth on who he feels might be the real Moses and it gave some fascinating background on a personal experience that he later had at that man’s tomb.

After Scotty, it was Sherri Blake from Haunted Heartland Tours talking about the Trans-Allegheny Lunatic Asylum in Weston, WV and the history of a very dark place. She had some great research and pictures and the one photo I wish I could have taken all weekend was the reaction shot of Wendy when she saw a picture of where the surgical icepick goes in during a lobotomy (hint, it’s in your eye socket)! Allison went to a spiritual protection seminar with Rosemary Ellen Guiley afterwards and in the episode she shares a little of Rosemary’s wisdom about protecting your soul and your psyche (even from the Djinn!)

Overall, the Haunted America Conference was a fun couple of days and well worth the 6 hour drive from Madison. We’re always looking for kindred spirits in the paranormal field (see what I did there?) and we made a bunch of new friends and inspirations for show ideas. One of the most exciting things about conferences is meeting other people with open minds and open hearts when it comes to the mysteries of the universe. It’s easy to forget how amazing and wonderful the world can be and just dwell on the worst aspects. The pointlessness, the boredom, the indifference… the more you focus on those things, the more they rot you from the inside.  It’s easy to be “Cynical” and that’s the title of this Sunspot track, but it helps when you meet other people who are as excited about the possibilities of this universe as you are.

As I sit here just existing,
Nothing moves me I am listening,
Desperate for some inspiration,
To break my lowered expectations.

The graffiti on the wall,
Might as well be a Bible,
There’s no justice of fair play,
There is no Hell or Judgment Day.

I look out of my window,
and I’m blinded by monotony.
The darkness of a world so bright,
It makes me want to shut my eyes.

When I say I’m realistic,
I really mean I’m nihilistic,
If we’re gonna be solipsistic,
We might as well be hedonistic.

I look out of my window,
and I’m blinded by monotony.
The darkness of a world so bright,
It makes me want to shut my eyes.