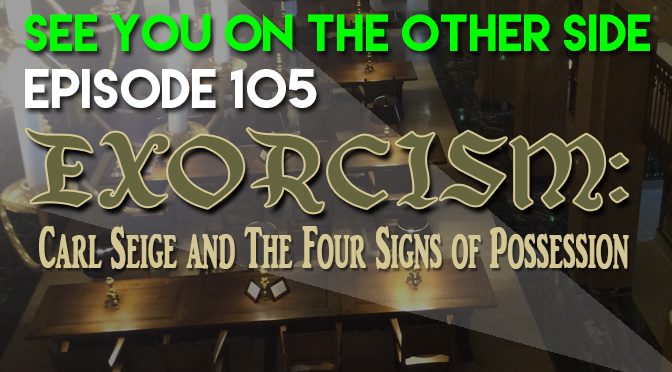 Exorcism, it’s back baby! From scores of possessed Peruvian kids to the Catholic Church increasing the number of priests they train for exorcism, to a psychiatrist seriously discussing possession in the pages of The Washington Post, the word on the street is that people are getting possessed by demons and it’s gonna take some of that Power of Christ to compel them out of there!

One of our favorite paranormal experts, Allison Jornlin from Milwaukee Ghosts, has been researching cases of demonic possession and we brought her on to talk about a little known, but very influential exorcism case, that occurred in the Devilish Dairy State (that’s Wisconsin) in the 1860s.

It all begins with the Seige Family, who were living in Germany in the late 1840s. Carl’s little sister was playing outside when she found a duck egg with a pinhole in it. She brought it into show the family but the mother immediately said to get rid of it. However, before they could, the dog ate it. Soon after, the poor pooch passed on and the sister became violently ill. She suffered for a year with blindness and fits and then passed away. One side of Carl’s body shriveled and he became very sickly. Soon after the family emigrated to Watertown, Wisconsin because they knew that the Devil wouldn’t follow them to America (right? Right?!)

Not so, Carl continued to suffer from strange symptoms. Newspapers reported that he had a lizard (or some said a snake) in his stomach. He started acting crazy so his parents brought in a Native American doctor to help draw out the evil, but that didn’t seem to work. So, they finally called in the demon-cleansing professionals, the Catholic Church.

Now the Catholic Church says that there are four Signs of Possession:

You don’t have to exhibit all the signs to be authentically demonically possessed, but it’s an important checklist because at least 3 out of the 4, you can’t really fake. (It’s easy to act freaked out around a cross, people do it in Dracula movies all the time. It’s a lot harder to answer someone speaking in Latin or deadlift a Mini-Cooper.)

In Carl’s case he exhibited three of the signs, number one, he met his would-be Exorcists, the Rev. John Gmeiner and another priest as they were arriving, even though no one told him when they were coming. Number two, the priests would ask him questions in Latin and he’d give the correct answer, responding in German, but showing that he understood the Latin nonetheless (even though he had no prior education in the language.) Number three, when he was deep in the throes of his possession, he reacted violently to the crucifix.

The priests exorcised Carl and were able to drive the demons out of him according to Father Gmeiner’s book, Spirits Of Darkness. But like herpes simplex, the demons never really go away, they just hide and come back in multiple outbreaks of possession throughout your life. Carl Seige had to be exorcised many times during his life to keep the Devil at bay.

In the present day, they recently held an Exorcist training seminar in Northern Illinois at Mundelein Seminary. Allison stopped by there last week to do some research and maybe catch a glimpse of some of those Catholic heroes who are learning the proper angles to spray Holy Water and the latest in projectile vomit-avoidance techniques. Our friend, Tea Krulos, wrote an article about it in the Milwaukee Record and called it “Exorcist-palooza”.

There’s an new Exorcist TV show coming on FOX this season as well. William Peter Blatty’s book was famously based on a 1949 case, but there’s some connections that Allison has been researching that are less well known, and that’s a story for another podcast.

Self-harm is one of the cornerstones of demonic possession. There’s even a case in the Bible where Jesus encounters a possessed man cutting himself with stones. (Mark 5:5) This song, “Mercy of Myth” by our band Sunspot talks about how punishing yourself needlessly isn’t worth it, because not only does it make you feel bad, it also opens you up to being possessed!

There is a Hell we hold within,
you can’t forgive yourself for the things you did.
A hair shirt and a bottle,
won’t let you forget.

Consequently, rear entry
is all that we’re left with.
We camouflage our sabotage,
and lay at the mercy of myth.

And culpa’s even worse than Crack,
You don’t need a sheepskin to know that,
even after cutting, nailbiting, hair pulling and spiting.
All your shame is still toxic.

Consequently, rear entry
is all that we’re left with.
We camouflage our sabotage,
and lay at the mercy of myth.

I’ll abandon ship on this guilt trip,
and let it drown,
Need some clemency from self pity,
and burn it out.