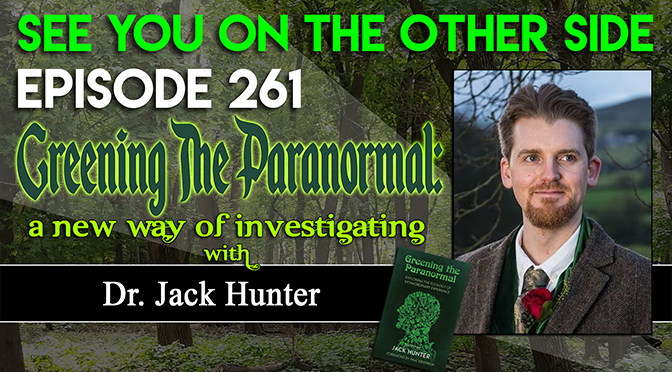 Last time we spoke with Dr. Jack Hunter, it was upon release of his book Engaging The Anomalous : Collected Essays on Anthropology, The Paranormal, Mediumship and Extraordinary Experience. He’s an anthropologist who has devoted much of his research to exploring paranormal experiences from a more holistic perspective. Instead of just searching for physical evidence in paranormal experiences, he factors everything in from the culture of the experiencer to the history of the surroundings to try and get a deeper understanding of the phenomena.

Humans seem hardwired for extraordinary experiences, so why can’t we prove it? Everyone knows someone that they trust that has had some kind of strange psychic experience or seen something that they absolutely can’t explain. So why is it so hard to prove it? One theory lies in the idea that the very words “paranormal” or “supernatural” are part of the problem. Those words say that metaphysical phenomena is something outside of normal experience.

In our interview with J. Van Ysslestyne, the author of Spirits From The Edge of the World, which is a study of one of the oldest continuous cultures on the planet as well as the one that gave us the very word “Shaman”, she says that to that tribe, the very idea that we’re separate from our surroundings, our land, our ecological system, is an alien thought.

We are part of the land as much as a tree and as much as a bird and they have a spirit or an energy that we can connect with. Paranormal experiences reflect that energy and when we isolate ourselves from it, or try to study the physiology of the experience instead of what happened as a whole, we’re not getting the entire picture. When we do that, we become observers instead of participants. And being a participant seems to be essential in having a paranormal experience.

That form of belief, animism, is one of the oldest kinds of religions, and it’s less of a religion with “rules” and more of a system of belief and conduct. The idea that we’re all connected to the world around us and that spirits are in everything whether it’s an inanimate object or not is how our ancestors viewed their surroundings for much longer than we’ve had modern religion.

Okay, so in this belief system does that mean that rocks have souls? Well, maybe not like humans, but sure, they have their own type of souls. Their own type of energy and it interacts with all the other energies around it and the system itself becomes its own entity. From Bigfoot to faerie sightings to UFO encounters to ghosts, people have often experienced the extraordinary outside in nature. What does that mean?

Well, that’s what Jack is tackling in the new book he has edited, Greening The Paranormal: Exploring The Ecology of Paranormal Experience, is a collection of essays that goes deep into the idea that everything in the world is connected. In fact, he took his inspiration from the recent trend of “Greening Religion”, which means that certain churches and faiths are becoming more interested in environmental activism because they realize that pollution and man-made climate change will destroy the wonderful planet their God has created.

And that’s part of the idea of this new book, that perhaps understanding how important nature is to our own ecstatic and spiritual experience will give us new inspiration on how to battle harmful global warming or plastics in the ocean or smog over our cities. If we destroy the system, we could destroy our paranormal connection to it. That’s all very Avatar, sure, but that doesn’t mean that tens of millennia of human nature doesn’t have some ring of truth to it.

My fellow weirdo and sister Allison Jornlin joins Jack and I in this conversation where we talk about:

For the song this week, we were inspired by Chapter 9 of the new book, “Ancient Webs, Modern Webs, World Wide Web” and the idea that we’re re-creating with LTE and 5G and the already-here Internet of Things a kind of communicative web among humans and inanimate objects that’s been there all along. And when we thought about that, well, Golden Earring’s “Radar Love” was the first song that came to mind. We used a little homage to that in the lyrics to be an inspirational starting point for this episode’s Sunspot track, “The Web”.

Inside the web
it’s all alive
inside the web
we’re all aligned
from the rocks to the seas to the dirt and the trees, our pets and the breeze, our love and disease,
it’s the wifi you see with your mind’s eye
it’s the wave in the air, our line in the sky.

I can feel you
always with me.
I can hear you
when I can’t see
from the whisper in my ear
to the hair upon my neck
I know you’re somewhere out there
Inside the web.

inside the web
it’s not a trap
inside the web
it’s our wiretap
from the land to the snows, the worms and embryos, mushrooms
and rhinos, our pain and shadows,
it’s the radar love that we dreamt of,
a hidden network we’re all part of

I can feel you
always with me.
I can hear you
even when I can’t see
from the whisper in my ear
to the hair on my neck
I know you’re somewhere out there
Inside the web.