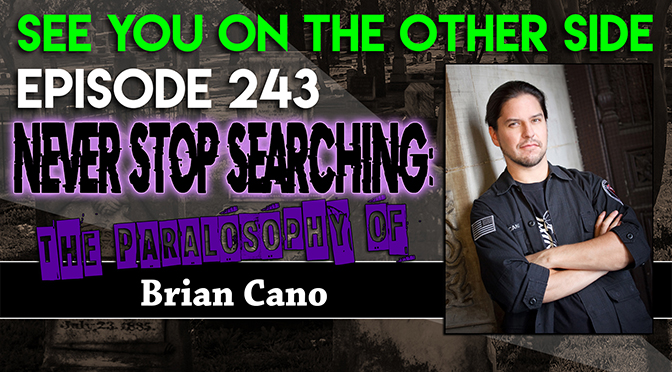 You might be most familiar with him as the ghost hunting equipment guy on Haunted Collector with John Zaffis, the nephew of the notorious Ed and Lorraine Warren. Or you might have seen him as one of the hosts of the new Travel Channel show Paranormal Caught On Camera. But in the days before paranormal reality television was the popular phenomena it is today, Brian was urban exploring the abandoned buildings and haunted locations of Staten Island and putting together videos of it for public access cable.

His show Scared on Staten Island! (and eventually just called Scared! as they began investigating locations outside New York) started off with just camcorders documenting his haunted adventures and it eventually would lead to a career of hunting ghosts and investigating weird phenomena all over the United States.

His website is called “Never Stop Searching” because it’s based on getting the specualtion out of the research of paranormal phenomena. Why is a ghost the best explanation for an EVP? Why would spirits be limited to a certain location when they don’t have a physical body? Why do we assume that it’s dead human personalities that are showing up in photos and not our own real live brains and psychic energy projecting onto the audio recording or visual image?

in this interview, we discuss Brian’s “paralosophy”, which is really about unlearning all the stuff that we’ve been led to believe about paranormal investigation. Some of the topics we cover:

If you’re in Wisconsin, Brian will be teaching his method of paranormal investigation at the Old Baraboo Inn on April 27th to celebrate their 20th anniversary. Tickets are available by clicking here. Of course, we’ve been to the OBI a few times and have had some weird experiences of our own there, so you never know what you’re going to see!

The song this week, we were inspired by Brian’s “Paralosophy” and the idea of unlearning everything we think we know about the paranormal. Here is Sunspot with “More Than We’ve Dreamt Of”.

it’s so much
bigger than what you see

more than you’ve dreamt of
in your philosophy

and you’ll know it
when you’re ready

it’s what’s stuck in
the corner of your eye

and it’s the fear
that we don’t know why

but when the clouds clear
we’ll see the sky

it doesn’t matter
if we agree

for all these worlds
are yours for free

in the light of
infinity

more than we’ve dreamt of
in our philosophy

it’s so much
bigger than what you see

for all these worlds
are yours for free

more than we’ve dreamt of
in our philosopy

and we’ll know it
when we’re ready