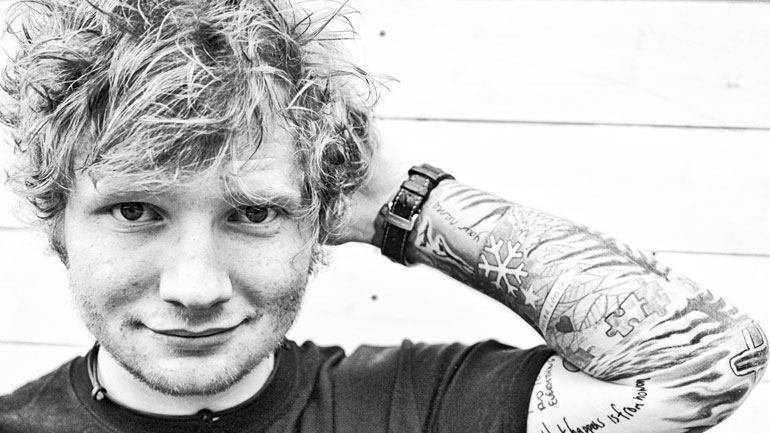 It’s a big week for famous singing ginger, Ed Sheeran. First, “Thinking Out Loud” wins the Grammy for Song of the Year and then it’s his birthday on February 17th. I first heard his music during the end credits of The Hobbit: Desolation of Smaug and liked it and I figure if the guy is alright with Peter Jackson, then he’s alright with me.

But the reason that we’re talking about “Thinking Out Loud” today is that people were hearing a “ghost voice” in the track. The moment happens at about 44 seconds into the song.

So, the Internet being the Internet, the rumor quickly went around that the “ghost voice” was actually a spirit who never found love and is sadly singing from the other side.  Or that the studio that the recorded it in was haunted and that it was the spirit who was singing along with Ed in the vocal booth.

This trended on Twitter last year and became a big topic of speculation for his massive teenage fanbase. Kids love ghost stories, cute singers,  and gossiping with their friends about it, so this was kind of a perfect storm.

And of course, when a topic is trending, there’s no reason not to have a little fun with it, here’s a video with over 100,000 hits purporting to analyze the track and find the ghost voice (but it really just contains a jump scare at the end.)

And this weird speech-synthesized video actually explains the whole issue as just an effect of the reverb.

Reverb? I doubt it. Sounds just like he was putting a little extra inflection in his voice with the word, “heart”. I can’t even hear a harmony background vocal in there on the verse. But when you tell people there’s a ghost voice in there and you can only hear it with headphones they start to convince themselves that it’s in there, especially if they listen to that section repeatedly.

I’ve been in the recording studio and have had that same effect. You’re listening closely to something over and over again and you start to hear phantom sounds. An echo or a weird note can show up that’s not really there when you listen to something repeatedly in a short stretch. Your mind starts playing tricks on you, that’s why it’s always recommended to leave for a little while and studio guys have special tricks to “keep their ears fresh“.

The first studio engineer that Sunspot (Wendy and my band, we write a new song for each podcast episode) worked with was named Ted Weigel and we recorded in his Madison, Wisconsin recording studio that’s now long gone and replaced by the Brink Lounge. We would often start recording sessions in the evening and since we were paying the day-rate and didn’t have a lot of money, we’d record for long spells into the next morning.

Ted would always say “my ears are fried” when needing to close a marathon recording session. We’d always laugh to ourselves about that statement. We were still energetic teenagers and didn’t understand yet how your attention and hearing and senses would just get worn out, like a muscle after a hard workout.

I think the only way to hear the ghost voice in this track is to listen to it over and over and convince yourself that it’s there. So to anyone that can still hear the creepy background voice on the word “heart”, I’d say what Ted used to say in the studio so long ago, “take a break, man. Your ears are fried!”