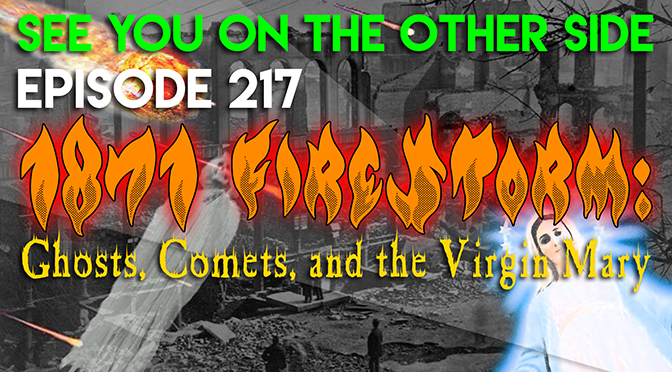 On October 8th, 1871 the deadliest fire disaster in American history struck Peshtigo, Wisconsin, a small town up north past Green Bay and almost to Upper Michigan. Estimates of casualties ran from over a thousand people to up to twenty-five hundred lost lives. People talk about the firestorm that blew through the town, a “tornado of flames” as they jumped into the river to escape the blaze. Not much of a respite as many then developed hypothermia from the cold water. It was a nightmarish hellscape as fire clouds filled the sky and the heat was so massive that it created its own wind, spreading the inferno further and further. Too many bodies were burned beyond recognition and of the corpses they could find, many couldn’t be identified because the only other people that could identify them were the other bodies. It was an incredible tragedy that was overshadowed in the news by another famous tragedy that happened that night, The Great Chicago Fire.

That’s right, two famous fires occurred on the same night. And it wasn’t just those, several towns in Michigan experienced incredible fires that night as well. The entire town of Holland (where I spent a very formative summer before Seventh Grade) burned down as did Port Huron. So, what happened that night that so many fires occurred at once?

Well, no cause of the fires has been confirmed for sure, but scientists believe that it was because it was such a dry summer in the Upper Midwest (there was only a quarter of the amount of the average amount of rainfall and Chicago itself only got one inch between the 4th of July and the night of the blaze) the towns were ripe for it. Fires had already been burning near Peshtigo as they were clearing land (the literal slash n’ burn technique) for farming and development that summer, so much so that a lighthouse near Green Bay was on twenty four hours a day that summer. In Chicago, they famously blamed Mrs. O’Leary because the fire started near her farm, and the legend was that she was milking a cow when he kicked over a lantern and started the barn on fire.

As early as 1883, Igantius Donnelly, a Minnesota politician proposed in his book, Ragnarok: The Age of Fire And Gravel, suggested that it was a meteor storm as Earth was passing through the remnants of Comet Biela. A comet discovered in 1826 that was supposed to be appear in 1872 and didn’t, leading him to speculate that we passed through the meteor shower of the comet’s debris and those meteors started the fire. Although, since the year before Ignatius also wrote a book on Atlantis that basically formed the modern narrative popularized by Edgar Cayce, his theory is still a little bit controversial to say the least.

But that’s merely one of the weird stories that came out of the 1871 firestorm. From the shadow figures people see on the streets of Peshtigo to the only apparition of the Virgin Mary officially recognized by the Catholic Church. This tragedy might be the most paranormal natural disaster we’ve ever seen.

Scott Markus from WhatsYourGhostStory.com and author of Voices From The Chicago Grave joins Wendy and I for this episode as we tell ghost stories of the great fires of 1871. Here’s some of the highlights:

For the song this week, we thought it would be cool to learn one of the most popular songs of 1871. Not only because it’s a fun challenge, but also because we want to play this song and some other contemporary music when we do our own investigation of the sites of the Great 1871 Firestorm. We’d love to stir up an EVP or some ghostly activity by playing a song that the spirits know. So, we decided on a William Shakespeare Hays song that sold over a million copies of sheet music in 1871. That’s like going platinum way before platinum existed! Here is the Sunspot version of “Mollie Darling”.

Molly fairest sweetest dearest, look up darling tell me this
Do you love me Mollie darling? Let your answer be a kiss.

Mollie fairest, sweetest, dearest, look up darling tell me this
Do you love me Mollie darling? Let your answer be a kiss.