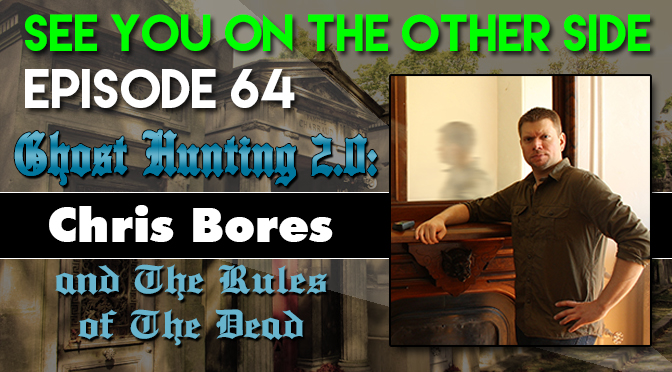 Chris Bores is mostly known for his YouTube comedy videos as The Irate Gamer where he plays through vintage video games, reviews them, and gets angry every time he dies in the game.  While he’s gotten millions of views for his video game work, his paranormal investigation is what inspired his book, Ghost Hunting 2.0: Breaking New Ground, something he’s been fascinated with since hearing unearthly footsteps in his grandparents’ house.

Bores describes himself as a “Paranormal Communicator” instead of  a ghost hunter and uses psychology, ancient texts like The Tibetan Book of the Dead, and an EMF meter to talk to spirits.  Him and his partner, Alan Cicco, blog about their adventures on the website, Pursuit of the Paranormal.

Chris goes into detail about some of his ghost hunts that led to his book, especially at the Saint Augustine Lighthouse in Florida, one of the Southeast’s most famous locations for haunted history. He tells us about Eliza, who has a crush on a tour guide at the lighthouse and the 90-minute conversation they had with her using an EMF meter, where they would lead her with questions and gauge her responses based on changes in the EMF meter.

So, what is Ghost Hunting 2.0? With Chris it’s more about actually trying to have a conversation with the spirit, rather than just taking a photograph or finding evidence. To him, he’s interested in what they want. He describes his six classifications of spirits (confused, angry, hungry (for unfinished business, not for like ghost food or something), etc…) as well as what he calls the “Rules of the Dead” (that linked article has some cool details about Eliza at the Lighthouse too in the comments.)

Talking to one particular spirit, the ghost seemed to hint at a greater power that was trying to block them from talking to people. The idea that the dead are supposed to hide from us is his most intriguing one. We tend to think of ghosts being tied to a place because something happened traumatic there or they don’t know they’re dead and can’t move on. But what if spirits are all around us and most of  the time, they just aren’t supposed to talk to us and are just following the rules? That made me think of Vampire: The Masquerade, which was a role-playing game I used to play in the 90s. Not just play it, I did live-action (LARPing, baby!)

But the idea of the Masquerade was that the most important thing to vampires is that YOU DON’T LET PEOPLE KNOW VAMPIRES ARE REAL. Wendy mentioned that kinda sounds like Fight Club as well. But the idea that ghosts don’t want us to know about them and someone or something is making spirits hide. Well, that’s pretty spooky isn’t it?

The song this episode is inspired by Chris’ rules. Because if spirits aren’t supposed to talk to humans then you have to say the things that you want to say now, today, and don’t wait, because once you’re gone, those words are forever lost. Here’s the track, “Rules of the Dead”.

I’m the one who never said goodbye,
I’m the flatliner that never told you why.
I thought that I could succeed where Orpheus had failed,
But there ain’t no coming back when you’ve broken through the veil.

Say what you want to,
don’t let them stop you,
go where you dream.
Love who will let you,
Don’t be afraid to,
No guarantees.
And don’t let all your words be left unsaid.
You can’t break the rules of the dead.

Look in my eye,
when you say goodbye
and say it like you mean it.
When you flatline, on the other side
you’ll be defeated

Say what you want to,
don’t let them stop you,
go where you dream.
Love who will let you,
Don’t be afraid to,
No guarantees.
And don’t let all your words be left unsaid.
You can’t break the rules of the dead.