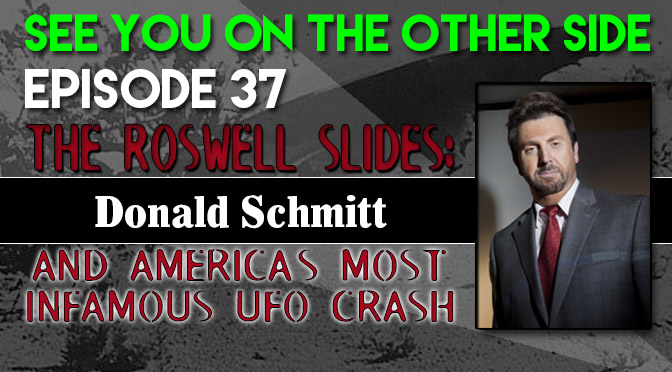 The Roswell Slides are on all paranormal lovers’ tongues this week as they get ready for a huge unveiling in Mexico City on May 5th. Well, to get ready for it, we’re going in on the grandaddy of all US UFO cases, the famous crash in Roswell, New Mexico in 1947. It’s the story that’s been made famous by countless television recreations on shows like Unsolved Mysteries or Sightings as well as several books about the event.

Mike and Wendy Lynn go deep into the history of the case for those of you who might not know all the theories and the stories, starting with the “flying saucer mania” of 1947 that started it all, to the debris found by Mac Brazel, to the press release sent by the Roswell Air Field saying they found a flying saucer and later denial, saying it was just a weather balloon.

The history of the mythos surrounding Roswell as we know it really starts in 1980 with the publication of a book, The Roswell Incident, and that’s where it starts to get interesting, rumors of alien bodies taken back and dissected, pop culture mentions in Independence Day, Alien Autopsy specials on FOX in the 1990s, controversy with the investigators (including today’s interviewee, Donald Schmitt), stories about mutant children, hey look, it’s even former President Bill Clinton chiming in!

Once we get through the history, we do an in-depth exclusive interview with Donald Schmitt who has investigated and will be part of the team presenting the Roswell Slides on May 5th at an event in Mexico City hosted by Jaime Maussan, sometimes known as the “Mexican Art Bell”.

Schmitt’s first book, UFO Crash at Roswell, was the basis for the Golden Globe-nominated Showtime film, Roswell, (starring Kyle MacLachlan and Martin Sheen) and we talk about how he went from UFO investigator to UFO author to a consultant on a major film.

Then we get into what everyone’s been waiting for, the Roswell Slides, which are Kodachromes that might show non-human bodies being worked on in the 1940s and the pictures were originally taken by someone with a connection to President Eisenhower. We go in deep on the slides, how they were found, how they were investigated, and a preview of what the big presentation is going to be on May 5th.