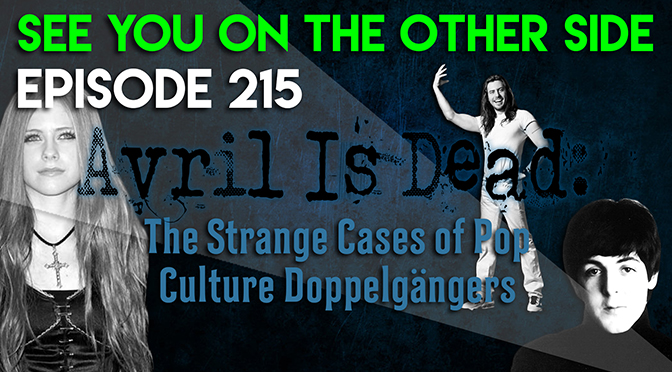 Avril Lavigne’s latest single, “Head Above Water” is off her first album in five years. After battling Lyme Disease, Lavigne said that it was thinking of her own mortality and going through the living Hell of a night where she believed that she was going to die that inspired the music off of her new album. But some people on the Internet believe that the real Avril Lavigne died over fifteen years ago and it’s her lookalike that has been living her life instead.  Is the Avril Lavigne who is singing “Head Above Water” really a doppelgänger originally named Melissa Vandella? Is it really Melissa who married the guy from Nickelback AND the guy from Sum 41 (well, at least she keeps it Canadian!)? Why’d you have to go and make things so complicated, huh?

Well, not really. A Brazilian fan site revealed the fact that they made the whole thing up as a hoax in 2012 as a social media experiment. Could they start a rumor that other eoieoke would report on? Well, here we are, good Jon guys. Avril of course is not the first musician that people said died was replaced surreptitiously, she’s just the latest. Paul McCartney obviously is the most famous with the “Paul Is Dead” business from the late 1960s.

If you haven’t heard the story, it goes that Paul McCartney got into a car accident and died in 1966 and the British government asked the Beatles to stay together so there wouldn’t be a rash of teenage suicides in the wake of the band breaking up. And I almost believe that. No band was bigger than the Beatles, ever.  We had  a Beatles week in my Sixth Grade class because my Baby Boomer teacher was so excited to talk about them. Books after books have been written about them, they’re the biggest, richest, and most famous musicians ever. They have a song royalty and merchandise machine that will last long after I’m dead.

People heard “I buried Paul” at the end of “Strawberry Fields Forever” or “Turn me on, Deadman” when they played “Revolution #9” backwards and they said that John was leaving them clues about what really happened. They said that there were hints in Sergeant Pepper’s Lonely Hearts Club Band to the name of the impostor and that the fact that they stopped performing live at the end of 1966 meant that they didn’t want the new Paul to get exposed. People even say that the cover of Abbey Road is supposed to represent a “funeral” for Paul, with John as the clergyman, Ringo as the mourner, and George as the gravedigger. Sorry, I think that’s reaching. If the real Paul McCartney actually died, this new guy will have been Paul for almost three times as long as the original Paul was alive. Plus if this guy wrote “Let It Be”, then I like the doppelgänger better!

Paul might be the most famous, but the idea that Elvis Presley traded places with his doppelgänger is the plot to Joe Lansdale’s wonderful short story (and modern horror cinema classic) Bubba Ho-Tep. And fascinatingly enough, an Elvis impersonator named Jimmy Ellis used the idea of the King faking his own death and returning to sing under another name to catapult himself to some minor hits and touring success in the late 1970s. Never underestimate the ability of American marketing ingenuity to turn a tragedy into a way to make money.

Perhaps the weirdest case of synchronicity is something that just happened with one of our favorite musicians, Andrew W.K. If you haven’t heard him, it’s kind of like a Norman Vincent Peale book set to industrial heavy metal. There’s lots of screaming, lots of talk about partying, lots of dancing stupidly. Basically his music is amazing and as a band, we’ve been huge fans of him since right around 2002 where we would blast I Get Wet to keep us awake as we drove three abreast in a little truck going from gig to gig. We’ve gone to see him a dozen times, we opened for him when he played in Madison in 2015, and we just saw him again in Austin this year.

Wendy and I just decided to talk about rock star doppelgängers on Friday, so when Stereogum released an article this weekend about an obscure controversy that erupted around Andrew W.K. years ago and that he might not be the person who recorded the first album and that he was replaced, well, we knew it was kismet!

First things first, Andrew W.K. is ridiculous. He wears a dirty white t-shirt and filthy acid-washed jeans, that’s his uniform.  His twitter is constant positivity about the power of partying. He had a column in the Village Voice completely dedicated to making people feel better about themselves through partying, pizza, and music. His show on VH1 was called Your Friend, Andrew W.K. It’s a non-stop performance art piece that has been going on since his first album, and that dedication has made his music mean even that much more to his fans. Sometimes at his shows you’ll see people dressed in the AWK uniform (unlike Wendy who makes her own Andrew W.K. wear!)

When he first visited England, even the BBC joked that it was rumored that Andrew W.K. wasn’t a real person but just a hoax conceived by Dave Grohl (from Nirvana and Foo Fighters) of all people. But in the liner notes for Andrew W.K.’s first album, it mentions that it’s executive produced by someone named Steev Mike (obviously a pseudonym). There is an article about Steev Mike in the early press for Andrew W.K. (before he’s signed to a major label) that uses Andrew’s picture for Steev. So what’s that about?

In 2004, a concert in New Jersey is abruptly canceled mid-show and people say that the Andrew W.K. that was onstage that night wasn’t the real one, it was just a guy dressed up as the original. Then, his official website is hacked  by Steev Mike himself, telling Andrew not to “squeeze him out”. Andrew makes a few cryptic statements, but on the Internet people start theorizing that Andrew W.K. is a fictional creation and this is just an actor playing him. Kind of like Pierce Brosnan in Remington Steele. People even say that the face of the Andrews looks different from the first album to the second album, that it’s a new long-haired white shirted wild man playing the character.

What’s the truth? Well, that’s what the Stereogum writer tries to get at in the article, but even Andrew W.K. officially says something on Facebook in a personal message to everyone that likes his page:

We urge you to dismiss the claim that Andrew isn’t real, or any similar assertions that paint him as something he is not. Andrew has never worked behind the scenes with any individual or group in order to make it appear as though he doesn’t exist.

So, the debate returns. What do I think? It’s just a performance art piece that was meant to dial up the mystery when Alternate Reality Games were hot in the early 2000s and they got a lot more traction out of the power of positive thinking then by creating some anti-Andrew W.K. The plan changed when they lost their label deal for their next album. But is it a different person playing the character? His face really thickened between I Get Wet and The Wolf

I have to admit, that I kinda thought the same thing. It might just be getting older because he was so young in the first pic.

Was Andrew W.K. created by committee? Maybe. Do I care? Not really. The music and live show are my favorite parts and that seems to be the same guy since we first saw him in concert in 2004 in Milwaukee.

Bu people in general, demand honesty and authenticity in particular from musicians more than other artists it seems. The fake Paul wrote “Live and Let Die”, the new AWK wrote “Music Is Worth Living For”, the fake Elvis gave us Bubba Ho-Tep, the fake Avril gave us, well… I don’t know what she gave us, but I’m okay with all of these things.

There’s something particular about musicians, we like them dangerous, we like them real. It’s Robert Johnson selling his soul to the Devil, it’s Ozzy Osbourne as the Prince of Darkness (and not a doddering old addict). it’s Alice Cooper as a horror movie character and not a golfing Christian. We take that artifice seriously, maybe too seriously. When we think that they need to use a lookalike in order to deal with fame, maybe it’s fame we should be rethinking.

The Sunspot song this week plays around with the idea of the evil twin. Someone that looks like you that’s doing all the things that you don’t dare to. Are they acting out your worse impulses are they living your life better than you are? Is your doppelgänger the one who deserves your life because he won’t waste it? That’s part of the inspiration behind this week’s paranormal Sunspot track, “Doppelgänger”.

There’s an impostor
playing tricks on me
A psychopath
with my identity
There’s a counterfeit
walking round in my skin
My personality splits
Who is the Evil Twin?

Who’s My double, my alter ego
just a carbon copy
But in the end there’s only one
it’s either him or me

There’s an impostor
playing tricks on me
A psychopath
with my identity
There’s a counterfeit
walking round in my skin
My personality splits
Who is the Evil Twin?