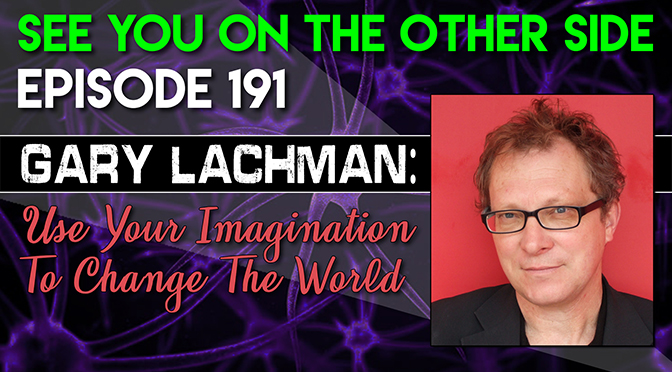 Gary Lachman is a man after our own heart. Not only does he write amazing books on occult figures like Aleister Crowley, Madame Helena Blavatsky, and Colin Wilson, but he started as a musician in the New York New Wave scene in the 1970s (the most exciting time to be a musician ever, in my opinion!) As the bass player of Blondie, he wrote songs like “(I’m Always Touched By Your) Presence, Dear” which talks about the strange ESP and synchronicities that he shared with his girlfriend at the time and it even namechecks theosophy (which might be the only time that’s happened in a Top Ten UK hit!) Later on, he played with Iggy Pop after forming his own band, The Know, a name that was directly inspired by the early Christian Gnostics (a mystery religion that believed that you could interact with God directly instead of through the institution of the Church.)

So, Gary used to write  pop-rock songs based on paranormal themes, which makes him awesome. But since leaving the music business in the 80s, Lachman subsequently moved to London and has been writing books and articles on occult figures and paranormal themes since.

Allison from Milwaukee Ghosts gave me his book A Secret History of Consciousness for Christmas in 2003 and it was the first time I’d heard of Nineteenth Century New Age philosophers like Madame Blavatsky and Rudolf Steiner. It was the first book that I read as an adult that shook my materialist worldview to the core and made me see mystery in the world anew. That’s why we had to have him on the show!

So, it’s perfect that Allison and I talk to Gary about his New York rocker youth, some of the occult imagery they appropriated for the New Wave aesthetic, and how he was ejected from David Bowie’s party over a disagreement about an occult author(!)

But then we get into the meat of his research and writing about the Western Esoteric Tradition – that is the philosophical idea that one can achieve Enlightenment through direct interaction with the Divine or the Spirit World instead of a mediated route through a traditional religious institution. Influenced  by everyone from Carl Jung to the guy who wrote Space Vampires, Gary Lachman also gives Allison and I a workshop in integrating the spiritual side of yourself with the materialist parts. Gary covers that in his latest book, The Lost Knowledge of the Imagination.

But things get really interesting as we preview Gary’s upcoming book on President Trump. Dark Star Rising: Magick and Power in the Age of Trump is the kind of work that you have to see to believe. We discuss the real power of symbols, the external group consciousness that is the World Wide Web, and much like our conversation with Nick Redfern about The Slenderman, we delve into how social media and the Internet might be affecting reality (just wait until you hear about Meme Magic!)

Make sure to visit Gary’s website and read some of his articles and check out his books. He sets the standard for thoughtful discussion of occult philosophy and detailed research. This interview is a great starting off point because we cover the  basics of the subjects that he goes much more deeply into in his books.

Speaking of deep, since Gary Lachman was the one who introduced me to Madame Blavatsky, the ultra-dramatic Spiritualist who founded the Modern Theosophical Society as well as being one of the key philosophers who ushered East Indian spiritualism into Western society, we thought she’d be the perfect inspiration for this week’s song.

In her most famous book, The Secret Doctrine, the opening stanza discusses “The Night of The Universe”, which is a time in the cycle of creation and destruction where everything is gone back to its original form, the clay of all creation has been crushed and balled back up ready to begin again. It’s a time of no pain or want or trouble  and to us, the perfect inspiration for a lullaby.