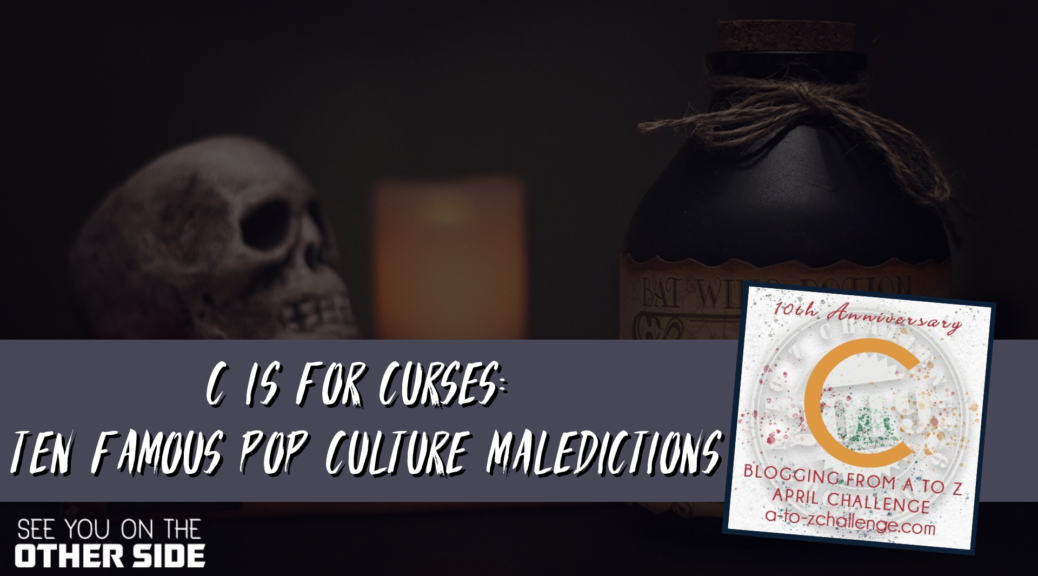 On See You On The Other Side, we deal with all kinds of paranormal and unusual phenomena. While we love ghosts, UFOs, and cryptids, which are really the big three of the paranormal, we really just can’t resist a good curse. (and who can? That’s the scary part, right?) Here are some of our favorite curses we’ve covered on the podcast, with a link to each episode.

The Kennedys are America’s royalty. They are a fabulously wealthy and beautiful clan whose children have spent generations in powerful elected positions from the East Coast. With a President, multiple Senators and House Representatives, you would think that these guys have the world wrapped around their little finger. But tragedy has followed their family for generations, from the assassinations of the two most powerful brothers to the airplane crash of JFK Jr. to the failed lobotomy of Rosemary Kennedy, somehow their incredible fotune seems tainted.

Oh, Hollywood. Glamor, money, fame… and very little lasting love relationships. Big stars change spouses fast You’d think that if you win an Academy Award, the film industry’s biggest honor, that your loved one would want to stick by you more than ever, but it ain’t so. Best Actress winners particularly seem to have problems with their love life after winning the big award. Is the great esteem cursed somehow or might it be the jealousy of the entertainment industry causing the split (especially when the woman outshines the man)?

In 1845, the British Navy launched their most ambitious mission to find the Northwest Passage to establish a trade route between the Atlantic Ocean to the Pacific. They sent their most technically advanced ships and two captains who were well-versed in Arctic exploration. Both ships became trapped in the ice and disappeared, prompting multiple searches for the Lost Franklin Expedition from Britain, America, and Canada over the years. Both ships were found in the late 2010s, but when the HMS Terror was discovered in 2016, the local Nunavut people felt that the spirits were disturbed on their island by bothering the sunken ship. Several untimely deaths occured in the community and they sent a team of guardians to perform a ritual to keep their community safe from the curse.

No doubt about it, Poltergeist is a terrifying film. But the movie is fiction, what seemingly happened to the actors involved isn’t. Both of the actresses who played the daughters of the haunted family, Dominique Dunne and Heather O’Rourke died way too young. Dunne was murdered by her ex-boyfriend and O’Rourke died of a freak bowel obstruction. Julian Beck and Will Sampson, the evil and good spirits from Poltergeist II: The Other Side, died shortly after the movie’s release, hadrly unexpectedly, but unlucky at least. Some people say it was because they used real human skeletons on the set of the film, but Craig T. Nelson is still doing just fine…

Jimi Hendrix. Janis Joplin. Jim Morrison. Kurt Cobain. Amy Winehouse. All immensely famous musicians who died at the peak of their fame and way before their time. But why did it all end for them before their 28th birthday?

6. Robert Johnson and the Curse of the Crossroads

Robert Johnson was one of the most influential blues guitarists of all time and was called the King of the Delta Blues. He also died at 27, but was never as famous in his lifetime as the other members of the club. His fame came after he died and has been called the best bluesman ever by the likes of Keith Richards and Eric Clapton. His songs have been covered by everyone from Led Zeppelin to The Blues Brothers. Some of them can be dark with titles like “Hellhound on My Trail” and his most famous song, “Crossroads” people say is about how he sold his soul to the Devil at a road crossing in Rosedale, Mississippi. It gave him amazing musical talent, but it ended up taking his life early.

If you haven’t heard of the Mothman of Point Pleasant, a dark winged humanoid with red glowing eyes who was seen in the late 60s in West Virginia, you might consider yourself lucky. No less than the man behind the International Cryptozoology Museum himself, the legendary Loren Coleman, wrote Mothman: Evil Incarnate, a book where he describes the Mothman Death Curse. He devotes an appendix to one hundred mysterious and untimely deaths of people who have been involved in the Mothman mythos in some way, from the original victims of the Silver Bridge Collapse to people who worked on the Richard Gere film.

The Curse of King Tut

There were supposedly nine victims of King Tut’s curse, people who were related to the excavation of the Egyptian Pharaoh’s tomb. Sir Arthutr Conan Doyle, the writer behind Sherlock Holmes, even toured that there was some kind of supernatural vengeance that was being wreaked on these Western interlopers. It was featured in all the newspapers at the time, but also Egypt was a very popular topic to write about, and the financier of the King Tut Expedition gave a single paper the exclusive rights to the story. So, was the curse blown out of proportion in the interest of paper sales or was there really a curse on the wall of the tomb of Egypt’s Boy King?

Before he became President, William Henry Harrison was governor of the Indiana Territory and was behind a shady deal that screwed the American Indians there out of a good deal of their land. A great battle was fought at Tippecanoe and Harrison’s forces emerged triumphant. The brother of defeated Shawnee Chief Tecumseh, Tenskwatawa, was considered a great prophet and he supposedly cursed Harrison to die in office and the presidents that every twenty years after. And they did, Harrison was elected in 1840 and dies in 1841, Lincoln dies in 1865, Garfield in 1881, McKinley in 1901, Harding in 1923, Roosevelt in 1944, and Kennedy in 1963. Seems like being elected in a year that ends in a zero is bad luck until Reagan survives his assassination attempt in 1981.

The Curse of the Billy Goat

How ’bout them Cubbies, right? They’re the most famous Chicago sports institution and are beloved by celebrities from Bill Murray to Vince Vaughn. And years afer his death, most baseball fans can still hear Harry Carey’s famous call of “Holy Cow!” perfectly in their heads. But another Chicago institution is the Billy Goat Tavern (the inspiration behind the Saturday Night Live classic “Cheeseburger Cheeseburger” sketch) and then the owner was kicked out of a Cubs game in 1945 because his pet goat smelled too bad, the rumor is that he cursed the team to never win the National League Pennant again. They didn’t get in the World Series again for 71 years and coincidentally clinched the title on the 46th anniversary of the owner’s death. 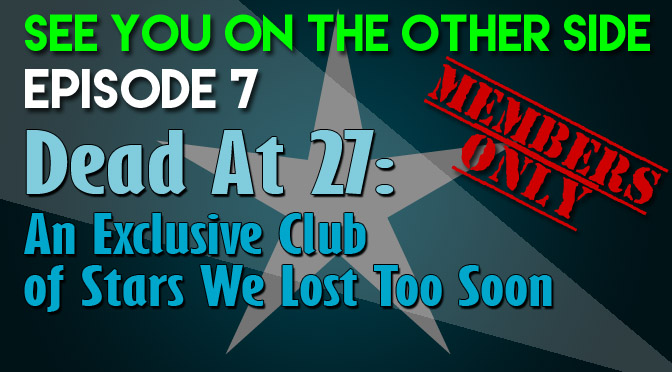 Several of the greatest stars of the music scene left this world at the age of 27. In today’s episode, we talk about the many musicians who are members of the “27 Club”, including:

The majority of these tragic losses were due to abuse of drugs and alcohol, but some of the deaths are mysteries that remain unsolved, some even leading to speculation of murder.

The question at hand: Is something strange or mysterious going on that leads iconic musicians into this “exclusive club” at age 27? Science helps us out as we talk about a researcher who actually studied the statistics to get us closer to an answer to this question.

It’s everything that I ever wanted,
a place where I’m always on the dial.
never uncool, never forgotten,
That’s a helluva price to pay for style.
But to join you need more than just a song,
Are you sure you wanna belong?