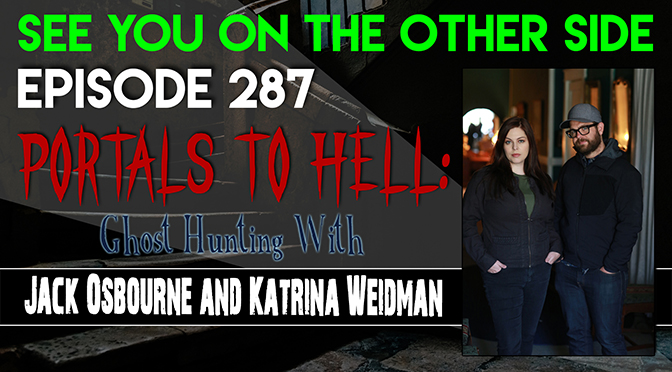 Jack Osbourne and Katrina Weidman return on Friday The 13th to TRVL with the second season of Portals To Hell. Jack, of course, is the son of the rock ‘n’ roll Prince of Darkness, Ozzy Osbourne, and he grew up in the world of reality television as a star of the megapopular The Osbournes. He’s fully embraced his father’s legacy by not only producing paranormal reality TV but by becoming a ghost hunter himself! Katrina Weidman of course, rose to television fame through Paranormal State (which also featured previous guest Chip Coffey) and three seasons of Paranormal Lockdown with Ghost Adventures‘ Nick Groff.

We talked with Jack and Katrina about the upcoming episodes of the show and what they’ve learned about the supernatural and themselves through two seasons of investigating the paranormal together.

Then Wendy and I talk about the legends of the portals to Hell throughout history as well as one of the most famous ones, in Stull, Kansas. We visited there last year and here’s my Facebook live video:

Wendy and Scott from WhatsYourGhostStory.com visited Stull in 2017 and while they didn’t find a portal to Hell, they certainly found some weird burnt dirt by the ruins of the old chapel on the cemetery grounds.

So, in addition to interviewing Jack Osbourne and Katrina Weidman, we also talk about:

Now, Jack and Katrina purposefully going to places with a “dark energy” made me think about Nietzsche’s infamous passage from Beyond Good and Evil:

Whoever fights monsters should see to it that in the process he does not become a monster. And when you look long into an abyss, the abyss also looks into you.

And of course, Portals to Hell is going to make me think about the “Crack of Doom”, which Tolkien called the forge where Sauron from The Lord Of The Rings created the “One Ring to Rule Them All”. It’s where Frodo had to take the ring to be destroyed. But the phrase “crack of doom” originally meant something else. The word “crack” means an extremely loud noise, like a crack of thunder. And the “crack of doom” means the end of the world because that’s the loud noise of angelic trumpets that will sound at the breaking of the Seventh Seal. Which is the beginning of the last Judgement from the Book of Revelation where Jesus will return and bring the good souls to Heaven and cast the bad ones into the Lake of Fire. Catholic filmmaker Kevin Smith played with this idea in his film Red State.

So you throw together a little Nietzsche, the gates of Hell, and the Lake of Fire and that’s how you get this week’s song, “The Crack of Doom”

I took on the Devil so I could make my mark,
I went fighting monsters and I stepped into the dark

Tragedies, infamies, terrible bloody shames,
they were waiting for me
and they knew me by name

I went to the Gates of Hell
and they followed me through
When you look at the abyss
the abyss looks at you.

I played a game with Evil,
thinking it was just a goof.
I swam in the Lake of Fire
but I wasn’t fireproof.
When you focus on atrocity
the work gets worse and worse.
The self-fulfilling prophecy
will damn you like a curse.