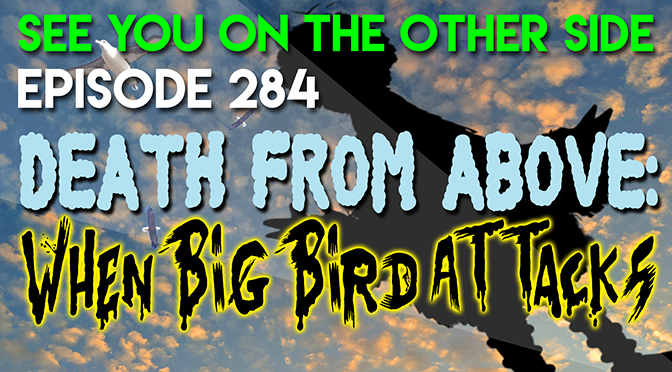 Gigantic birds. They’re fricking terrifying . And there might be some kind of genetic memory (or epigentic inheritance) as to why when CNN posts headlines like “Bones reveal Neanderthal child was eaten by a giant bird”. We’ve had Seth Breedlove talk about his Terror In The Skies documentary which talks specifically about giant birds in Illinois, but in this episode we wanted to widen the net.

First of all, we recorded this episode in Alton, IL during the American Hauntings 2020 Dead of Winter event. Alton is famous not only for birthing the tallest man in the world, but for a giant scary bird mural on the side of a cliff on the Mississippi River. The “Piasa Bird”

We’ve discussed in the past where the word Piasa came from and the original Indian legends surrounding it but Allison Jornlin from Milwaukee Ghosts has some really interesting research in how the Piasa bird might not have originally been a bird at all, but a very different monster of Indian legend and can even trace its origins to a very real predator. So, is the Piasa monster really supposed to be a scary giant bird? We delve in.

Then it’s time to talk about other monster bird attacks in history and actual newspaper reports and eyewitness sightings. My personal favorite is this one in Texas where you can just hear the racism dripping off this Police Captain’s words…

However this next story is a little too sad and this 1926 article about a 2 year old infant being murdered by a giant condor in Argentina was too much for even a stone heart like mine to take.

We also tell the story of our cousin who saw a Thunderbird himself in the late 80s while in a Southeastern Wisconsin hospital awaiting the birth of his first son. Here’s how he describes the size of what he saw:

In this episode, we tackle all these giant bird stories as well as coming up with a brand new Sunspot paranormal rock song.

Winston Churchill famously said, “He who controls the skies controls the war.” and as earthbound creatures, there’s something extra terrifying about being attacked from the sky. Airborne predators pick their targets from far away and swoop in to snatch their prey. The stories of these giant bird attacks are certainly arbitrary and horrifying. It makes us realize how precarious and precious our life is when we we live on a knife edge of randomness. Whether it’s cancer, tsunamis, car accidents, or gigantic condor kidnappings, we all live under the constant threat of “Death From Above”.

Until you’re back on solid ground,
You just can’t let it go
terra firma, illusion of control

A casualty of chaos that was
cast out of paradise
To pacify, we need a sacrifice