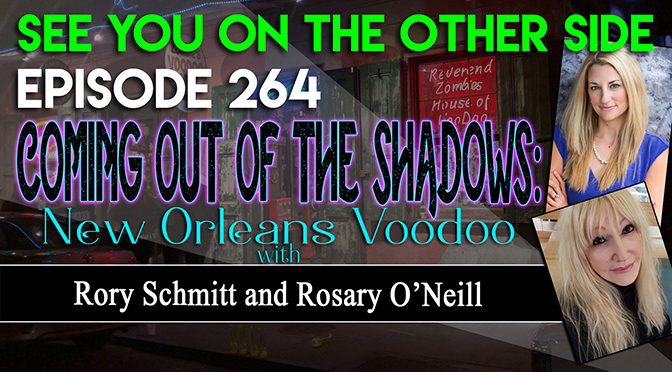 No other American cities have mysticism associated with them like New Orleans does with Voodoo. And that’s because, more than any other city, New Orleans is its own thing. It is firmly ensconced in American culture from jazz to football to Mardi Gras to the outporing of support after Hurricane Katrina and holds a special place in the hearts of anyone who has visited (I’m always looking forward to my next trip!)

And for paranormal fans, it’s where Anne Rice wrote her vampire series, it’s where Trent Reznor bought a house, Nicolas Cage bought a pyramid in the city’s most famous cemetery for God’s sake. It’s a city full of haunted history and vampire tours, rich with culture as a crossroads of French settler, African slave, American Indian, Carribbean and English culture have all collided into a gumbo (see what I did there?) of something completely unique. The place has something for everyone… Spring Breakers like Mardi Gras for the Girls Gone Wild aspect, paranormal lovers enjoy all of the legends and strangeness, music lovers can appreciate the one-of-a-kind Jazz, foodies can find a special cuisine, historians can enjoy one of America’s oldest cities, etc…)

Rory O’Neill Schmitt and her mother Rosary O’Neill are New Orleans natives who have taken a lifelong interest in voodoo and have written a book New Orleans Voodoo: A Cultural History. It’s a respectful and eye-opening exploration of a topic that is easily demonized. Voodoo isn’t the black magic of The Serpent And The Rainbow or Angel Heart, it’s not a religion practiced by the “other” that Hollywood can often make things out to be. It’s a normal way of seeing the world and finding spirituality in everyday life that has amalgamated from West African animism, Roman Catholicism, and New World neccessity.

When I read their book, it gave me an insight into Voodoo that I hadn’t seen before. It was more than just superstition and spells, but it provides some understanding of how the world’s oldest kind of spirituality (animism) can combine with more modern religion (Christianity) to create a cultural force that helps guide people’s lives. In this interview about New Orleans Voodoo, we learn about:

When I was reading the book, the idea of possession in a voodoo ceremony really struck me as something different and interesting to my religious upbringing. Instead of being possessed by the Holy Spirit like the Christians who speak in tongues, they get possessed by a variety of different lwas (a variety of spirits who act between humans and God), whether it’s a lord of the dead like Papa Gede, or Papa Legba, the Trickster of the Crossroads. In the ceremony, the participant becomes a vessel for the spirit to speak through and will often not remember it. That kind of surrender to the invisible powers of the world seems so dangerous to me, but it’s an exiciting idea. It’s exactly the type of thing that people who tell you you shouldn’t play with Ouija Boards would warn you against, but it’s also the kind of thing that seems like a powerful spiritual experience . “Possess Me” is our song inspired by the idea.

I walked with a zombie
somewhere on Bourbon Street
Coming out from the shadows
midnight on St. John’s Eve
So if you go go go
go see the queen
Please let her know know know
she’s gotta pray
she’s gotta pray for me

Close your eyes and listen close
You can feel the Invisibles
flesh and blood, spectres and ghosts
some things aren’t divisible

One thought on “264 – Coming Out of the Shadows: New Orleans Voodoo with Rory Schmitt and Rosary O’Neill”