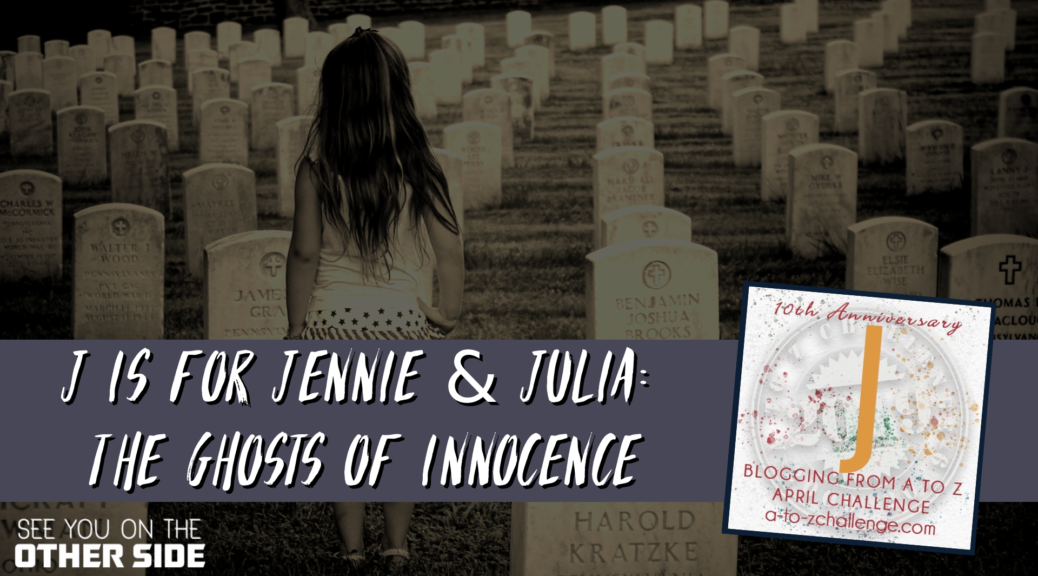 Both Jenny Wade and Julia Buccola are immortalized today and given nearly sainthood status as two women who died tragically and have left behind some legendary stories,

First, we will go to Mount Carmel Cemetery in the south Chicago suburb of Hillside, Illinois.  Perhaps no cemetery illustrates the equality that death brings to all of us.  No matter how glamorous or ordinary, how wealthy or struggling, or how we lived our lives, we all physically end up in the same place.  Nowhere is this more true than in Mount Carmel Cemetery where the executors of the St. Valentine’s Day Massacre in interred in the same ground as some of their victims.  Warring Mafia henchmen and leaders alike, are resting peacefully alongside their rivals.  This dichotomy may not be more stark when considering that criminals like Charles Dion O’Bannion, “Machine Gun Jack” McGurn, Roger Touhy, Frank “The Enforcer” Nitti, Sam Giancana and even Al Capone is buried at the same cemetery as religious leaders like Cardinal Bernardin.

On the opposite side of the cemetery from Al Capone is the beautiful gravesite of Julia Buccola Petta, who is considered a modern-day saint.  Julia’s life was tragically taken at the young age of 20 while giving birth to a stillborn infant.  She was buried in her wedding dress under a nondescript grave, sharing her coffin with her baby.  At the time, she was remembered by her surviving family and a newly widowed husband.  Now she is remembered by a whole city.

After her death, Julia’s mother began having nightmares.  These nightmares consisted of her daughter begging and pleading to be removed from the earth from where she had recently been buried, as if she had been buried alive.

This started a six-year battle by her mother to have Julia’s body exhumed.  Finally, the church and cemetery agreed to go through with the task to appease the elder Buccola.  Their findings were remarkable.

Decomposition of the human body begins almost immediately and it tends to be a rapid process.  Knowing this, all of those present during the excavation expected to see nothing but bones once the casket lid was opened.  To their complete surprise, Julia’s body looked as if she were still living.

According to those who witnessed this first-hand, her skin was still fresh and soft to the touch.  She looked as though she was merely sleeping.  While Julia appeared completely unchanged, her infant was in the expected condition; nonexistent other than skeletal remains.

A monument was erected on Julia’s grave depicting Julia standing on her wedding day.  There are two photographs attached to the base of the monument.  One is Julia on her wedding day while the other was taken the day her body was exhumed, just before reburial.

Those who knew the story immediately considered Julia a saint.  She died while giving birth to her first child and her body was proven to be incorruptible.  She was an instant heroine for Chicago’s Italian-American women.

Indeed, Julia has been seen outside of her grave and without the help of an exhumation.  Her ghost has been seen walking the grounds of the cemetery in the area nearest to her Harrison Street gravesite.

For the most part, she has been seen at night, but there is at least one notable daylight encounter where a lost little boy was eventually found holding Julia’s hand.  When the worried parents finally found their child, Julia vanished.

Julia’s memory and inspirational past continues to live on throughout Chicago and, in particular, in the neighborhood around the cemetery.

Some 600 miles away in the living monument to one of America’s darkest events, Jennie Wade stands as a symbol to all the innocence lost during the Civil War.  Two opposing armies clashed over three days in 1863.  In all, over 175,000 soldiers would fight relentlessly around the town of Gettysburg, overrunning a town that previously only boasted some 2,400 residents.  Once the smoke had cleared, 50,000 soldiers were killed or wounded in the enormous, sprawling, battle.  Remarkably, only one civilian was killed.  It was 20-year-old Jennie Wade.

Wade, a born and raised Gettysburg native, went to her sister Georgia’s house as the fighting broke out to tend to her and her one-week-old nephew, Louis.  Instead of hiding out in the basement, Jennie was at work in the kitchen, baking bread for Union soldiers.  The intensity of the fighting was outrageous, with hot spots of action popping up and shifting constantly.  Perhaps, to the Wade family, they were growing apathetic to the danger around them.  After all, on day one alone, their house was hit by an estimated 150 bullets.  On the morning of day three of the fighting, this house saw one bullet too many.  Slicing through two doors, striking Jennie in the shoulder, continuing through her heart, only to emerge from the other side of her, coming to rest in her corset, one single bullet killed Jennie instantly.

Just days later, Jennie’s fiancé would also be killed in battle, even before learning of his love’s demise.

Due to the trajectory, many believe the bullet was fired from a sniper’s nest, possibly from the Farnsworth House, some 800 feet away. Immediately after her death, her body was taken down to the cellar of the house, which seems to be the most haunted part of the property

Today, Jennie is rightfully immortalized.  Her family was granted a pension as the family of a fallen soldier would since she died while serving the Union cause.  The house she died in is now a National Monument and a museum while a statue of her stands out front.  Her grave site is one of only two female graves in the country to fly a perpetual American flag.  The other person is Betsy Ross.

The Jennie Wade House is one of the dozens of known haunted sites around Gettysburg.  EVPs are commonly recorded by paranormal investigators.  There are claims of colored ghost lights appearing throughout the structure.  However, is it only Jennie who is still inhabiting the home?  Before the war, Jennie Wade’s father, James, was arrested for not returning found money and sentenced to two years of solitary confinement in the notoriously haunted Eastern State Penitentiary.  By the time he was released, he was a broken, mentally damaged soul.  He ended up spending the rest of his life residing in the Adams County Alms House, an asylum/poor farm.  Today, the museum’s cellar contains a blanket-covered mannequin, reproducing the scene of Jennie’s body laying here after her death.  Many speculate that it’s Jennie’s father who watches over this scene, still trying to protect his lost daughter.  People in the area have felt the unmistakable sensation of a hand grabbing them firmly, usually sending the unsuspecting individual running across the room.