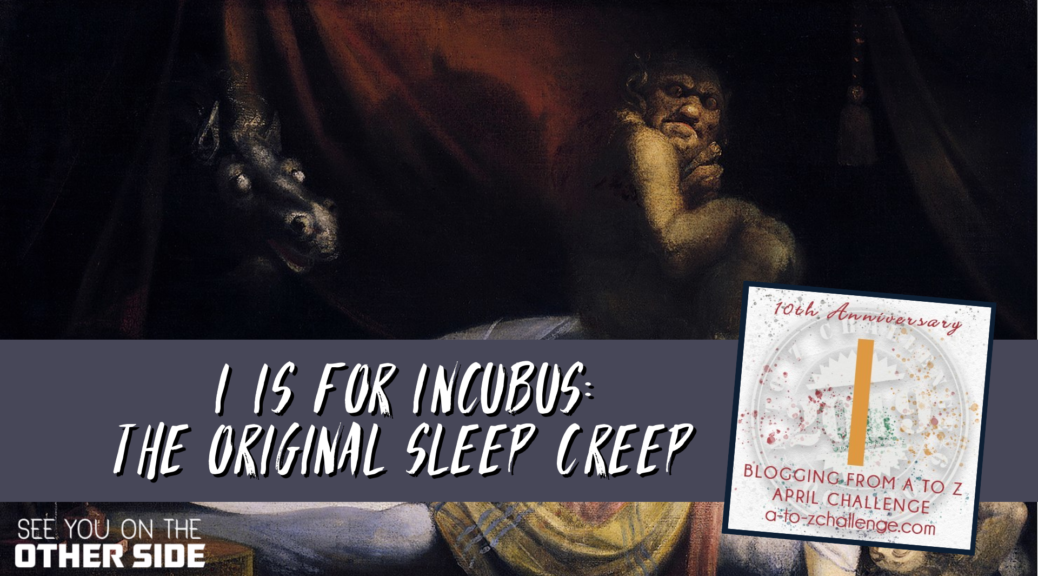 In the middle of the night your eyes open. You’re not dreaming because you can see your room all around you. When you try to move, your body refuses to cooperate. You feel a pressure on your chest, a tightening of your windpipe. You can’t breathe and you can’t move. And then you see it. This malevolent beast that’s on top of you. This thing has violated your bedroom, your safest space and now it’s riding you, choking the life out of you. It doesn’t feel like a dream, it’s happening to you. And there’s nothing you can do about it.

And then the wicked thing is gone. The pressure is relieved, you can move your arms again, you can breathe once more. You’re terrified because it wasn’t a dream, it was happening to you while you were awake. It’s a real live Freddy Krueger coming out of your nightmare world and entering our physical realm. How is it even possible?

Scientifically speaking, the state when you transition from sleeping to wakefulness is called hypnopompia. While you dream, your voluntary muscles do not move so that you’re not running around in your sleep. You cycle between REM (Rapid Eye Movement) sleep where you have dreams and non-REM sleep where your body is just relaxing. Sometimes the cycle doesn’t sync up right and you wake up and you’re still stuck where your body can’t move because your mind thinks you’re dreaming, and because you are still dreaming, you can have visual hallucinations as well. That’s sleep paralysis and it’s scary as Hell.

I myself had a terrifying experience with sleep paralysis and while I didn’t see an old hag, I saw the grey aliens from Communion standing around me when I woke up from a dream when I was 12 years old and it was horrifying. We covered that in an episode about sleep paralysis and I go into all the details of my own personal “nightmare”.

They often call sleep paralysis “Old Hag Syndrome” because some men dream of seeing an old woman on top of them. Our word nightmare actually comes from a creature in Slavic folklore called a mare that rides your chest at night while you sleep. The Germans even had little prayers they’d say at night to ward off the mares. It’s something that happens to humans almost universally and it’s terrifying.

Adam Gray, a Canadian filmmaker, was so affected by his visit from the Old Hag that he ended up making a film about it and it lead to a series of paranormal films for Canadian television. You could say that his Old Hag actually was lucky because it furthered his career!

But sometimes strange dream women visiting men in the middle of the night don’t just want to terrify and paralye you, they want to steal your seed. And that’s where we get the succubi from, sex demons like the Hebrew legend, Lillith. She was Adam’s first wife from Genesis and was supposedly banned from the Garden of Eden and determined to take revenge on humankind. She’s not exclusively a Jewish legend, because they also mention a Lillitu in the epic of Gilgamesh who was a female demon that seduced men in the middle of the night.

It was an easy way for religious men to not feel guilty about nocturnal emissions and wet dreams because it wasn’t their impure thoughts that caused it to happen, it was the succubi visiting them in the middle of the night.

When this happenes to women, they’re called incubi instead of succubi and an incubus rapes women while they sleep. English King James (the guy that made the famous Bible translation) wrote in his dissertation Daemonologie that a demon could be an succubus to steal the seed from the man while he slept and change into an incubus to impregnate a sleeping woman with it. St. Thomas Aquinas pondered the same question a few centuries earlier and decided that those children created from demonic copulation were still human because they had God-given souls because “only God could create life.” In Welsh folklore, it’s said that the child of succubi or incubi is called a cambion and has special powers, the most famous cambion being the wizard Merlin of Arthurian legend.

The thing is, these guys were thinking about nocturnal sex demons fairly frequently enough to write about them.

But, sleep paralysis, the Incubus and Succubus are universal to the human experience no matter what the belief system. In Zanzibar, they’re called the Popo Bawa and there was a very real panic in the 90s that this malevolent entity was on the loose on the island. We talked with an anthropologist who was there during the crisis and what was actually happening.

When seemingly otherwise healthy men were dying in Hmong communities in the United States in the 1970s after they were resettled after the Vietnam War, superstitions began arising that it was the dab tsog (pronounced da-cho), who are the crushing spirits that sit on our chests while they sleep. Because these communities were resettled and they didn’t have access to a traditional shaman, some were blaming it on the dab tsog running wild without their traditional spiritual protection. At least one author thinks that it was their belief in the dab tsog that killed them, but another scientist says he’s traced it to a particular mutated gene that controls sodium levels in the heart and it makes certain people more susceptible to irregular heart rhythms while they sleep and puts them at risk for dying in their sleep.

That would explain why it’s more prevalent in Southeast Asian males even though every culture experiences “nightmares”.

They weren’t necessarily all bad, though. In Hawaiian folklore, the househould gods of the kane (male energy) or wahine o ka po (female energy) could visit a couple in the middle of the night and lovemaking would be guilt-free because it was only in dreamland. In fact, the kane o ka po would sometimes help an infertile couple successfully have a child. But also, the man could become obsessed with his wahine o ka po and no longer want to satisy his wife. So, these dream lovers could end up being a mixed bag.

So, the next time you wake up and you can’t move, remember, you’re still dreaming! And if you’re terrified, some experts recommend trying to wiggle your toes or fingers before try to move bigger muscles because that might help. Also, they suggest closing your eyes and imagining your spinning (which interestingly enough, is also a technique I’ve heard to instigate an Out-Of-Body Experience), so before you panic try those techniques and hopefully your Old Hag or Incubus experience will feel just like it really is… only a bad dream.