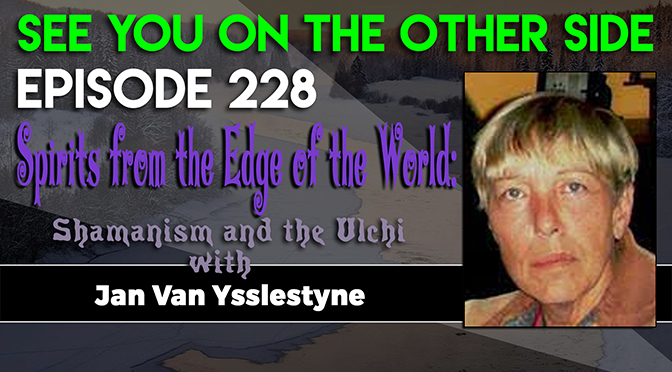 So what exactly is a Shaman? A quick explanation would be that it is someone who can interact with a spirit world that is surrounding us, but we usually cannot see, an intermediary between us and the spirits who can help us heal and ask for their wisdom.

Our usual Western idea is of some kind of “Medicine Man”, a witch doctor taking hallucinogenics and shaking sticks at the sky. Sure, he might know some natural herbal remedies, but it’s just primitive superstition. In our materialist society, if we can’t scientifically explain something, it must not be real. Nothing was more materialist than the atheism of the USSR and when they attempted to “Sovietize” the indigenous Siberian population, they specifically went after the Shamans.

The Ulchi People have been living in Far Eastern Russia for at least eight thousand years in one of the world’s oldest continuous cultures, in fact they speak the language that we get the word “Shaman” from. They are animists who find spirits in the whole world, from animals to people, from rocks to mountains. These spirits are constantly watching and judging us. Their Shamanic tradition has had millennia to develop and they remained relatively free from foreign interference until the Chinese tried to collect taxes on them in the 17th Century and the Russians eventually colonized the area in the late 1800s.

However there are less than three thousand Ulchi left according to the last Russian census. Jan Van Ysslestyne is an American who speaks their language fluently and has taken it upon herself to not only record their traditions and beliefs, but also keep them alive. Her latest book is called Spirits from the Edge of the World: Classical Shamanism in Ulchi Society, which is a compendium of Ulchi Shaman knowledge and teachings, often in their own words.

Jan also teaches Ulchi Shamanism for self-healing and discovery in her hometown of Seattle, Washington. In this discussion with Jan about her work and her latest book, we talk about:

For the song this week, we thought a little metal might be in order. There are places in Siberia that get colder than the average temperature on Mars(!) So, if “The Immigrant Song” is any indication (Led Zeppelin’s classic ode to Iceland), when we’re writing about a cold place, we got to heat it up with a barnburner. Inspired by Jan’s title as well as the Shamanic and animistic idea of a planet animated and alive, here is Sunspot with “Spirits From The Edge of the World”

Alive
Everything all that you see

Shaman
Each of us roots of the tree

Singing our visions aloud to the heavens
the dream of our lives will unfurl
Listen for the call, surrounding us all,
The spirits from the Edge of the World

In Tune
They’re giving you prophecy

Transform
to anything you want to be.

Singing our visions aloud to the heavens
the dream of our lives will unfurl
Listen for the call, surrounding us all,
The spirits from the Edge of the World

2 thoughts on “228 – Spirits From The Edge Of The World: Shamanism and the Ulchi”