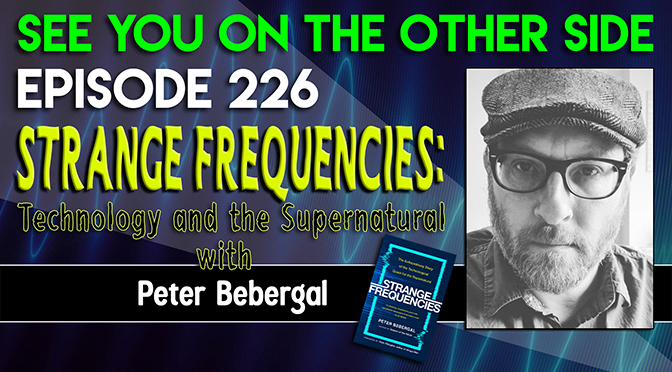 But there was always something that I felt was off in trying to use a computer to divine something about your life. There’s no human element, there’s no psychic or medium to help you interpret the cards, while it felt interesting and fun, it never felt magical. Tarot on a computer screen never felt sacred. It’s zeroes and ones, I never felt what Peter Bebergal in his new book Strange Frequencies: The Extraordinary Story of the Technological Quest for the Supernatural, calls “enchantment”. That feeling you are participating in something outside your natural human experience, like religious ecstasy or the of meditation, or when you’re talking with a medium and they tell you things that are impossible to know.

The last time we had Peter Bebergal on, we talked about his great book, Season of the Witch: How The Occult Saved Rock ‘n’ Roll, and this book is just as fascinating. He argues that using technology to uncover the paranormal has been with us since we started trying to explain the universe. Something as simple as rubbing a lucky rabbit’s foot is magical technology. It doesn’t have to be an Ovilus plucking words out of the ether. And really, is looking for signs of the future in animal entrails any different than a computer program designed to spit out random predictions? The same forces that would use the viscera to relay a message could just as easily use the zeroes and ones, couldn’t they?

Fast forward fifteen years and I use my Apple Watch to meditate every day. I’ve listened to MP3s of hypnosis sessions where I try to recollect past lives. I use my phone alarm to wake me an hour before I’d normally awaken sometimes so that I can explore lucid dreaming. I’ve gone from someone who scoffed the first time a psychic told me that she would do phone and Skype sessions (all I could think of was Miss Cleo) to being shocked and amazed at some of the things I’ve been told during those very same sessions.

When you watch Ghost Hunters or Ghost Adventures, the technology is as big a part of the show as the history of the haunted location. They set up digital voice recorders to catch EVPs, thermal imaging cameras to look for variations in the temperature (cold spots!), Electromagnetic Field Detectors to reveal temporary energy fluctuations. We don’t have the technology to capture a spirit like in Ghostbusters, but we can try to “capture” phenomena on tape when they happen. Technology and the supernatural are more intertwined than ever, but as Peter argues in his book, that’s nothing new. Some of the things we touch on:

In the episode, Wendy and I talk about how much fun we had at Krampusnacht in Milwaukee on the day before St. Nick’s. We have a whole episode dedicated to everyone’s favorite Christmas demon! Here’s a link to some amazing photos of Milwaukee Krampusnacht 2018 as well!

The song this week is inspired by the title of Peter’s book Strange Frequencies and the Spirit Box. Even our most famous inventors, Edison and Tesla, both thought that they could eventually design a radio to communicate across the veil (or even between planets) and we took that idea and ran with it. Here is Sunspot with “The Strangest Frequency”.

Finding patterns in the static
is automatic
with all these toys

sufficiently
advanced technology
is just necromancy
with some white noise