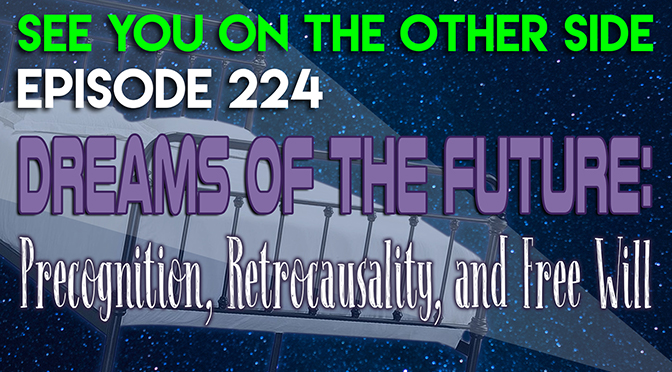 Have you ever dreamt something and it happened in real life? I have. I was eleven years old and it was the summer of 1988. I was in the middle of a nightmare when all of a sudden it was winter and I was getting off the school bus and kids across the street started throwing snowballs at my friend and I. My friend ran into his house and grabbed a red plastic circular sled to use as a shield against the snowballs. Thirty seconds later, I was back in the nightmare. When I woke up I thought it was weird, but it was just a dream about a snowball fight. Maybe I’d seen a movie about wintertime or someone mentioned it on the radio earlier in the day and it planted a seed in my head. I didn’t think I was having an experience of precognition.

Six months later, it was the first snowfall in Winter and I was coming home with my friend after school and everything unfolded exactly as I had seen. He even grabbed the red circular sled and used it as a shield, but I had never seen the sled before, in real life at least. At least I didn’t remember seeing it. I thought it was weird, but I still believed that it was all just a coincidence. Snowball fights are common enough, circular plastic sleds are popular (we had the same model in blue in my house), I didn’t think it was unexplainable.

What was unexplainable was the feeling that I was watching something from the future. Like I had seen it all before, more than just deja vu. I was re-experiencing something that already happened. My experience isn’t unusual, it’s common for even non-believers in psychic powers to experience some kind of premonition in dreams. They’re dreams after all, it’s easy to chalk it up to coincidence and it’s the most kind of empirical event of all. A dream only happens to you.

No even though my particular experience was fairly mundane (just a snowball fight), it does beg a lot of questions. If I was watching a pre-recording of the future, what could that that mean? And those implications are what we discuss in this episode.

Now, there’s been a lot of research lately on the idea of retrocausality, which is where cause and effect happen backwards. So information from the future determines what happens in the present and it’s been displayed in experiments looking at the behavior of subatomic particles, so it’s not like we’re getting messages from the future. But subatomic means that we’re in the land of quantum physics, which is what Einstein famously called “spooky action at a distance”. Of course, quantum physics is a field that is regularly abused by lovers of the paranormal as possible explanations for everything from telekinesis to ghosts, because some of the behavior of subatomic particles seems unexplainable with the reigning theories of physics. If time is set and is happening all at once, we’re just perceiving it the way we do as we travel through it, then maybe it’s possible for super tiny particles to relay information to the past.

But if everything that’s going to happen has already happened, is there anything we can do to change the future? What does that mean for free will? Do we really have any choices in our lives or are we predestined to live out the path that our genes, chemicals, and neural programming has laid out for us?

So, yeah, this episode goes deep into the nature of reality, man… we talk about:

Then we share our personal precognitive dreams as well as the dreams of two of our Patreons, Ghost Host Lisa from Madison Ghost Walks and C.E. Martin, an author who just came out with a great book called Stranger Than Fiction: A Skeptic’s Journey, and he allowed us to read you a chapter directly from his own personal experience. If you’d like to check out the book for yourself (it’s on Kindle Unlimited!), then click right here.

For the song this week, we were inspired by a study that came out in 2017 that showed even if we could see the future, almost 90% of us wouldn’t want to know. While we have an overwhelming desire to control our destinies, which is why we see fortune tellers and psychics, we’re just looking for confirmation that we’re gonna win. We’re looking for messages to help us from the Other Side, but not necessarily tell us that we can’t change anything. Mystery is baked into the human condition. If someone spoiled Game Of Thrones for me, I would straight up punch them in the face, what do you think it would be like if they spoiled my own story? I know that people can be cool with predestination, but as for now, I’m all T2 “NO FATE”. Here’s our track, “Remember The  Future”.

One thought on “224 – Dreams of the Future: Precognition, Retrocausality, and Free Will”