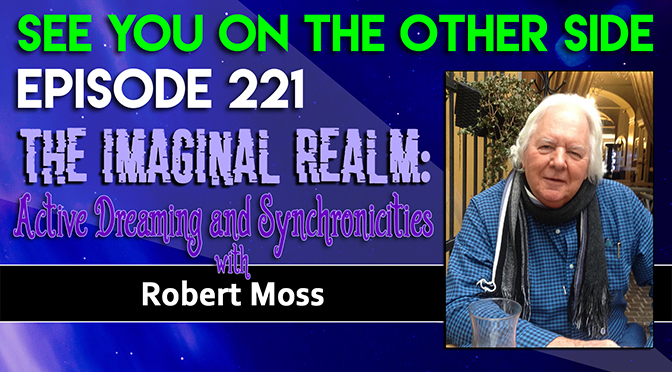 If you’re anything like me, you have a love/hate relationship with the dream world. Sure, it can be fun to dream and some whacked out cool things can happen, but nightmares can randomly develop and turn something unusual and strange into something terrifying and soul-crushing in the blink of an eye. I’ve felt ecstasy inside a dream, but I’ve also had bouts of uncontrollable crying and overwhelming pangs of guilt.

And I’m doing it to myself, right? Because dreams, they’re not even real. It’s just a “bit of undigested beef or a blot of mustard“! Well, author and dream teacher Robert Moss doesn’t think so. He calls the dream world “The Imaginal Realm” and believes that we can change our lives by what we see in dreams. He believes that it is a pathway to parallel universes of lives unlived here but fulfilled there. Moss believes dreams are a way to spend time with spiritual beings who live in a different dimension, to talk to the dead, and to receive messages from our higher selves.

Robert Moss has been featured on shows from Charlie Rose to Coast to Coast AM and he joins us to talk about how he uses symbolism (and lots of Jungian psychology) from dreams to help people work through their struggles in waking life.

Robert Moss’ new book is called Mysterious Realities: Tales from the Imaginal Realm and you can purchase it at his website, www.mossdreams.com

The song this week is a psychedelic dream voyage. “The Land of Nod” is the Biblical place located “east of Eden” where Cain was exiled after he killed his brother Abel. (In fact, in the game Vampire: The Masquerade, Cain is the first vampire and the sacred text of bloodsuckers is called The Book of Nod.) But it’s also a euphemism for dreamland, (you “nod” off to sleep) that was used as early as Jonathan Swift and Robert Louis Stevenson and is still used by authors like Neil Gaiman. And of course we had to shout out some Shakespeare, Poe, and Coleridge (who wrote the world’s most famous unfinished poem inspired by a dream!)  Here is Sunspot’s “The Land of Nod”.

can a lifetime be lived
with what a moment has to give,
Well, the clock is broken anyway

And it is your own creative hand
that flips this to a savage land
where you are nothing more than prey.

Who sent you
You sent you

can a lifetime be lived
with what a moment has to give,
Well, the clock is broken anyway

And it is your own creative hand
that flips this to a savage land
where you are nothing more than prey.

Who sent you
You sent you

One thought on “221 – The Imaginal Realm: Active Dreaming and Synchronicities with Robert Moss”