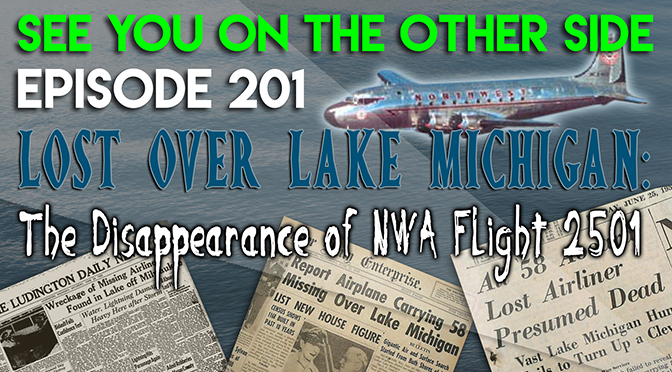 On June 23rd, 1950 there were 55 passengers and 3 crew on North West Orient Airlines Flight 2501 flying from New York City to Seattle. It was scheduled to stop over in Minneapolis but air traffic control lost communication with the plane shortly after it left Michigan and the plane was never heard from again. 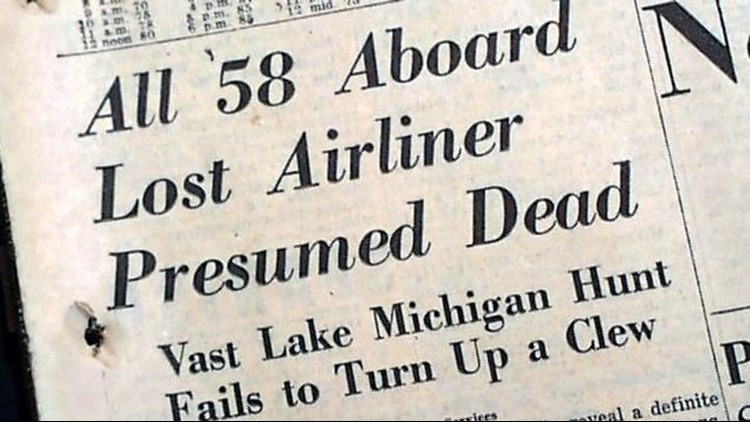 An oil slick was found a few miles from the coast and some “shredded wreckage” and human body parts eventually wound up washing to shore (enough to form a mass grave, even if the identities were never revealed), but nothing else of the plane was ever found. It was the worst aviation disaster in American history up to that point. There was a horrible thunderstorm that night over the lake and it was also a busy night for air traffic.

Could it have been lighting that hit the plane? Could they have flown too low to avoid traffic and crashed into the water? What happened? Valerie van Heest of the Michigan Shipwreck Research Association thinks she has some answers to why the plane went down, but without finding the rest of the plane, can never be sure.

Author Clive Cussler (the guy who wrote Sahara, which in my opinion is a fun underrated popcorn movie!) has formed the National Underwater and Marine Agency and has helped fund a yearly search for the past 15 years.

However, there’s more to this than meets the eye. Major Donald Keyhoe, one of the original flying saucer authors had claimed to have a government source that it might have been a UFO that the flight crashed into. Indeed, there were dozens of reports across the United States of UFOs that night. Allison from Milwaukee Ghosts has done lots of research on the paranormal possibilities here. As we reach the 68th anniversary and the search begins again, was the fuselage removed because there was something that we weren’t supposed to find? In this episode, we dig in deep.

And since we’re discussing one of Lake Michigan’s greatest disappearances, we thought we’d use a Sunspot song this week about one of our own great disappearances. In 2002, we played some shows with a band in San Antonio and Austin, Texas called Racketbox. They were all military guys  from Fort Hood in Killeen and played loud fun in-your-face punk rock. Anyway, their guitarist was mysteriously only known as Mr. Foff. That’s it. The only thing we could find on Racketbox was an incomplete Purevolume profile and even then it only listed a guitar player as Michael Jackson (and they said it was THE Michael Jackson, who was still alive in 2002).

From sharing Jack Daniels with him in his band van to seeing him rock out onstage, we never had a chance to learn his real name but we spent a lot of meaningful time with this Texas Wildman, even partying with him and his band members until the wee hours of the morning as 2002 passed into 2003 at some afterbar in Austin where it was impossible to find a cab and these were the days before GPS and Uber anyway. We went back to Wisconsin and in March the Iraq War started (on a night we were playing in Springfield, Illinois was when the Shock and Awe campaign began). Next time we went back to Texas was in May and we couldn’t find anything more on Racketbox or Mr. Foff. Four years later, we wrote a song about him on our album Neanderthal.

Good night, Mr. Foff. Wherever you are.

Another night, 12 other $h!tt* bands,
Nothing to do, just sitting on our hands.

Then somebody new came into town,
He got us drunk, yeah, he turned the beat around.

Illustrated man, the ink on his skin tells the tale.
Teen runaway, he’s done some time in jail.

Even though the show was pretty lame,
He earned our respect, but we never knew his real name.