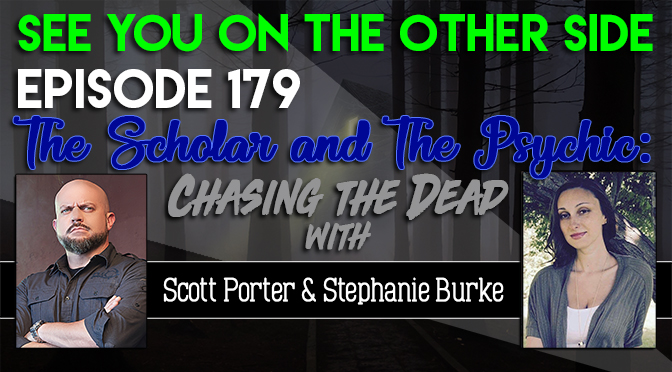 While home on break from college, Scott Porter saw a woman he thought was his mother making breakfast in the kitchen but when he came in to eat there was no one there.  Stephanie Burke was just a little girl when she saw her grandmother’s ghost and then started regularly communicating with spirits who visited her in the house she was raised in.

These paranormal experiences eventually led them both to lives of investigating the unknown. Stephanie became a psychic medium nd co-host of the Spooky Southcoast Radio show, while Porter joined the Tennessee Wraith Chasers who eventually starred in the shows Ghost Asylum and Haunted Towns on Destination America.

You can find Stephanie’s website at stephburke.com and learn more about Porter at tnwraithchasers.com, including links to where you can see investigate with them coming up.

Stephanie and Porter will be joining the fun at the Hawaii Paracon July 13-15 of this year, a first of a kind event for the islands, so make sure to check that out if you’re interested in some ghost stories and meeting fellow paranormal enthusiasts in the most beautiful place on Earth.

Now Stephanie was just at the Lizzie Borden house for a Kindred Spirits episode and Porter and the Wraith Chasers have investigated it as well. It’s a Bed and Breakfast now and it just made us think a little bit that it’s funny that we want to stay in these places where horrible things happened. In Iowa, they have a place called the VILLASCA AXE MURDER HOUSE – are we hoping something rubs off on us? It’s this morbid curiosity that binds paranormal investigators to each other, so we used that curiosity as inspiration for a little acoustic ballad, “Spend The Night”.

Is it a fear I want to face?
is it the memory of the chaste?
Is it the blood I want to taste?
I just don’t know.
Is it a lust for the profane
or a dream of the insane?
Well we just can’t explain
But we’ll spend the night.

Is it a fear I want to face?
is it the memory of the chaste?
Is it the blood I want to taste?
I just don’t know.
Is it a lust for the profane
or a dream of the insane?
Well we just can’t explain
But we’ll spend the night.