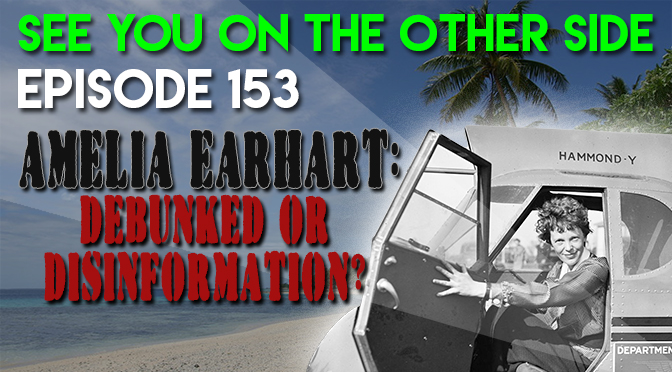 Amelia Earhart is back in the news eighty years after her disappearance. The famous aviator went missing over the Pacific Ocean in July of 1937 along with her navigator Fred Noonan and it’s been one of the Twentieth Century’s great mysteries ever since.

The reason she’s been the hot topic of conservation is because of a History Channel documentary called Amelia Earhart: The Lost Evidence. It featured former FBI agent Shawn Henry and his search for new evidence of what happened to Amelia and Fred. The theory that the special espouses is that they crash-landed in the Marshall Islands and were taken captive by the Japanese and later executed, effectively making Amelia Earhart and Fred Noonan the first American casualties of the Second World War.

One of the pieces of new evidence is a photograph from a dock in the Marshall Islands found by researcher Les Kinney. He was digging in the National Archives and discovered it from the files of the Office of Naval Intelligence. The photo purportedly shows a skinny Caucasian woman sitting on the dock and a Caucasian man, a Japanese ship with what looks a plane being towed behind it as well.

Okay, so that photo was the hot news right before the special aired and it was linked and featured everywhere there’s Internet. And then the special aired to huge ratings (for cable, it’s not like “Who Shot J.R.?” or anything, those kinds of ratings only exist for the Academy Awards and the Super Bowl now.)

So, just two days later, the story changes when a Japanese blogger who isn’t in love with the idea that the Empire decided to murder an innocent woman as a spy did some digging of his own. He discovered the photo somewhere else, in the Japanese National Diet Library Digital Collection, but according to the collection it was published in a book, a travelogue about the Marshall Islands (which were under Japan’s boot in the 1930s), and that book was published in 1935. Two years before Earhart’s disappearance.

So, the story changed. Blogs and news sites, excited about being able to follow up their original story from the week before, now had an update and it was devastating to the original evidence. The blogger, said that it only took him thirty minutes of Googling to discover the picture in the Japanese archive. So, is this a story of The History Channel not doing their diligence? It makes them and the researchers look stupid, almost like what happened with The Roswell Slides, where those photos were debunked in just a few hours. Well, everyone on the Internet jumped on the story and it seemed like case closed to a lot of people, but that wasn’t good enough for us! There was lots of compelling evidence in that special about Amelia Earhart being captured by the Japanese and eventually dying on the island of Saipan as a prisoner.

Allison from Milwaukee Ghosts has a curiosity that can never be quelled. She contacted one of the researchers featured in Amelia Earhart: The Lost Evidence, Dick Spink (featured in National Geographic right here), and he gave us his thoughts on why he believes the photo is still genuine, that the blogger has it all wrong, why there’s so much more evidence (including first hand accounts from several Marshall Islanders who claim to have seen Amelia Earhart and Fred Noonan on the island!) Dick provides a compelling defense (including a statement from the government of the Marshall Islands that the dock in question wasn’t built until 1936, so that date on the travelogue is impossible.)

Here’s Allison’s full interview with Dick Spink if you want to watch the whole thing!

So, next question. Was that date planted or just a mistake? And if someone was trying to create a disinformation campaign around Amelia Earhart, what’s the point? Sure, the Japanese government might not like to be known as the entity that killed an aviation pioneer and hero to men and women around the world, but it’s not like that was their only blemish on a spotless human rights record during the Second World War.

Well, it might not be a foreign power who is interested in keeping the truth buried. Some say the U.S. government covered it up because she actually was on a spy mission One of the pieces of evidence that they talk about is a secret Japanese diplomatic communique that was intercepted by the Americans where the Japanese say they believe the plane went down in the vicinity of the Marshall Islands. The communique was in a code that the Navy was able to break. Because the U.S. didn’t want the Japanese to know that we could break their code, we played dumb.

This new discovery shows that the U.S. was able to break Japanese secret codes in 1937. And if we were able to do that, how much of a stretch is it to believe that we were able to decode their messages in 1941?

If the United States knew that Japan was going to attack Pearl Harbor and did nothing about it, then that’s something worth spreading disinformation for. Now that’s a reason to change the narrative from Amelia and Fred being executed by the Japanese to just being lost in the South Pacific. That’s a reason to embarrass the researchers involved in Amelia Earhart: The Lost Evidence. And it’s not like the government are strangers to running disinformation campaigns…

Did FDR know in advance about Pearl Harbor? Prior to the war, a vast majority of the American public was opposed to getting involved in another European war. And the day after, everything changed. Patriotic Americans were signing up left and right to get involved in the war. We could finally help the United Kingdom, whose Prime Minister Winston Churchill had been pressuring Roosevelt for assistance for years by this point.

And Roosevelt was elected to end The Great Depression. Even with The New Deal programs in place, unemployment was at 20% in 1939. What’s a better jobs program than the largest war in history?

While there are several pieces of evidence that suggest, even if they didn’t know the specifics of the attack, they were intent on provoking Japan enough to attack. Robert D. Stinnett’s Day of Deceit: The Truth about FDR and Pearl Harbor details the McCollum memo which is an 8-step plan dated in October of 1940 that would be intended to draw a Japanese attack. Then, in 2011, a memo was found that the White House was warned three days before Pearl Harbor that the Japanese were readying for an imminent attack on Hawaii.

And then, on the other side, NPR ran a story titled “No, FDR did not know the Japanese were going to bomb Pearl Harbor”. The New York Times Magazine even ran an article called “The Weaponization of ‘Truther’” that lumps 9/11, Pearl Harbor, sasquatch, and Area 51 believers into the same bunch.

Look, in this day and age of “fake news” and “alternative facts”, disinformation has become just another part of the Culture Wars that we fight on social media. There are trusted news sources on the left, the MSNBC, CNN or NPR. And there’s the FOX News and Breitbart sites where Donald Trump’s supporters get their trusted information.

CNN and NPR both covered the Amelia Earhart photo “debunking” like the case was settled. Don’t believe it? Well then, you’re probably an Alex Jones-style conspiracy theorist and you’re just crazy. Alex Jones is the boy who cried wolf and the world no longer cares. He’s not a dangerous truth-crusader standing up against a cruel government conspiring to remake the world in an elitist image, he’s an Internet comedy meme now (this video of him ranting over a Bon Iver song got over a half-million hits in 4 days alone).

Disinformation has always existed but now stories can go viral and reach millions of people all over the world in an instant. We don’t know claim to know the truth about Amelia Earhart and we don’t know the truth about FDR and Pearl Harbor. But we do know that the official story isn’t usually the whole story. Everything we read has an agenda. Whether it’s as obvious as an editorial telling you who to vote for, a conspiracy theory blogpost, or a clickbait listicle that just wants to show you Viagra ads, always remember it’s our job to question everything.

Amelia Earhart’s determination made us think the perfect song for her would be this track about trying to determine your own fate. You’re never going to be able to control what’s around you and things never turn out like you think they will (the best laid plans and all that.) But you do pray that you do fail, you can do it with some dignity. Even if you’re going to go down in flames, that you get to do it your way. Here’s “Way I Fall” by Sunspot.

Overdone and overhyped,
I’m disappointed all the time,
These buildups always end up,
Letting me down.
I wanted the Himalayas,
I wanted to be part of the tribe,
I wanted an entourage,
And an overwrought sense of pride.

When I stop looking for,
What I thought was my dream.
When I want for something more,
The less it glitters the more it gleams.

Held up to a different light,
Altered and anesthetized,
Holed up and fenced away,
Unseen by prying eyes.
Like Scientology,
An exercise in idolatry,
Flash bulbs and rolling tapes,
Make me better than all the other apes.

When I stop looking for,
What I thought was my dream.
When I want for something more,
The less it glitters the more it gleams.
If I could save the world,
it wouldn’t matter at all.
I only want to choose the way I fall.

Karma smacked my across the face,
Free will led us to this place.

When I stop looking for,
Than I thought was my dream.
When I want for something more,
The less it glitters the more it gleams.
If I could save the world,
it wouldn’t matter at all.
I only want to choose the way I fall.