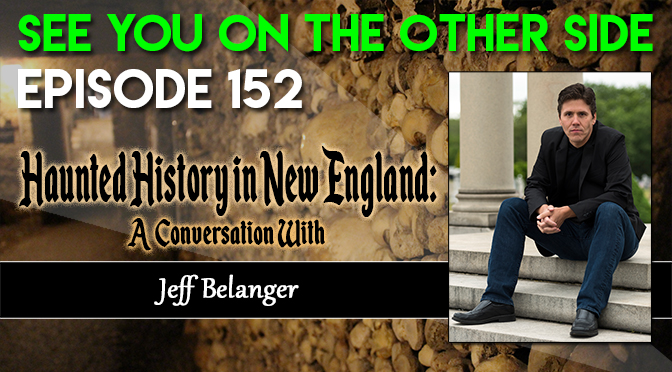 Jeff Belanger is one of New England’s premier haunted historians. Well known for his work with Ghost Adventures (he was one of the guys who found the haunted places and looked for witnesses willing to discuss their experiences), Jeff also hosted the online show Thirty Odd Minutes, has written fourteen books on hauntings, and was Emmy-nominated for his work on the PBS series, New England Legends (now available to watch on Amazon Prime!)

Growing up in Connecticut near Ed and Lorraine Warren (he even got to hang out at their house!), Jeff found himself fascinated with the paranormal at an early age. He started the popular ghost story site, Ghost Village in 1999 which is easily one of the largest paranormal resources on the Internet. Since then, he’s been writing books, hosting TV shows , and even climbing Mount Kilimanjaro (which we get to in this episode).

In this conversation Jeff shares his first real-life ghostly encounter in the Catacombs of Paris, some of his favorite New England ghost stories and legends, the inspiration behind his mountain climbing in Africa, and why Sandy Hook Truthers are sadly mistaken.

One of the stories that Jeff told us that really resonated with me was the story of Mercy Brown, a girl who died of tuberculosis in Exeter, Rhode Island in 1892. Her mother and older sister also died of tuberculosis and  then brother came down with it, so the people of Exeter believed that there was a vampire that was cursing the family. They dug up the bodies to see, but since it was wintertime and Mercy was being kept above ground (they had to wait for the ground to thaw to bury her), she was not as decomposed as they thought she should be. Also, as her body was more fresh so it still had blood in the liver and heart, which made them believe she was a vampire.

They believed that they could end the vampiric curse and save her brother by ripping out her heart, burning it, and feeding him the ashes, so they did. And it didn’t work, two months after eating his sister’s burned heart, Edwin Brown succumbed to the disease as well. That seemed like an excellent inspiration for a track, because looking at it from today’s perspective, the whole adventure seems so misguided. All they did was drag Edwin and poor Mercy’s father through Hell by digging up the bodies of the people he loved and make him believe that his daughter was a hellish abomination. Let the dead rest. Things are better left buried in the past. Mercy’s father went through all that turmoil, he made his son eat his own daughter’s burned out heart and it was all pointless anyway. That’s the inspiration for this track, “Digging Up The Dead”.