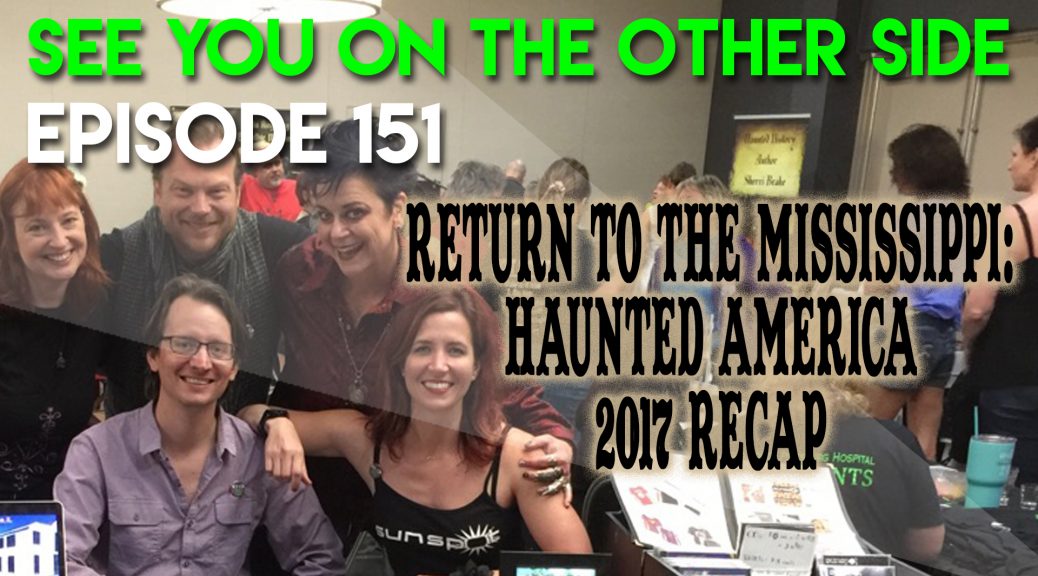 For the third time, we return to Alton, Illinois to do some paranormal business. The first, we did a live podcast and hung out at the haunted Maeva’s Coffeehouse. The second we went down to the Haunted America conference which was their Twentieth Anniversary.

This time, we went down in force to the Haunted America Conference to not only check out the speakers, but to hang out at a See You On The Other Side booth as well as play a few songs to kick off the conference (and thanks to the awesome Lisa Taylor-Horton for making that happen!)

The booth this year was Lisa Van Buskirk from Madison Ghost Walks, Allison Jornlin from Milwaukee Ghosts, Scott Markus from What’s Your Ghost Story, and then Wendy and I. So, we had a full boat and it was a great opportunity to meet a whole bunch of cool people.

We were right across the way from Greg and Dana Newkirk’s Traveling Museum of the Paranormal and Occult, so seeing the different attendees get to play with their various haunted and cursed items was a lot of fun throughout the day.

Some of the highlights of the conference were Troy’s introduction, the speaker panel on Friday night, Paranormal Sarah’s discussion of paranormal belief across cultures, Greg and Dana’s presentation on living with cursed objects,  and Rosemary Ellen Guiley on interdimensional beings.

It’s really amazing what Troy and Lisa pull together in Alton, it’s a small Mississippi River town that for a weekend each year becomes a paranormal hotbed with some of the finest speakers in the field attending and discussing topics of all stripes (except UFOs, for some reason Troy doesn’t like them, but don’t let him know that we love ’em!) I joke a little about Alton in the discussion, but that’s because the years I spent living in La Crosse, Wisconsin made me understand how these cities that grew up along the Mississippi River have gone through some rough times, and to be able to bring people there and create a successful fun event year after year is no small feat.

One of the things that I thought was interesting was the people at the booth right next to ours (the South Pivttsburgh Hospital in Tennessee) had never been to a conference before and they were so cute. The manager of the hospital said that she felt out of her element, like a “faker” because she wasn’t a “paranormal person”. I completely understand because this community can sometimes feel extremely insular and it’s very protective because outsiders in the mainstream love to be judgmental about the things that we think are awesome.

I told her that you didn’t need to be a “paranormal person” to appreciate everything, you just had to have an open mind. No one really knows the answers and anyone that tells you that they do is lying to you or they’re deranged!

This is an area where we’re all just taking our best guess. But that’s just not the world of the paranormal, that’s everything in life. We’re all just doing our best out there, no matter what it is. And everyone feels like a fraud sometimes, that they’re “getting away with something”. As long as you’re okay with yourself, that’s all that matters. We’re all just trying to get by, and all the things that we make ourselves believe that are so important, or things we torture ourselves with, in the end don’t really matter to the universe. Have fun and be your best, because it’s just “Smoke and Mirrors” anyway.

Well you’ve got your cross to bear
Don’t you know, that we all got our weights
And It’s not right and it’s not fair,
don’t you know, it’s gonna be okay
It’s smoke and mirrors anyway.

a target on your back
and always under attack
maybe that facade is gonna crack,
But it’s okay, yeah, it’s okay.
Feeling like a big phony
questioning your sanity
don’t worry what they believe
it’s smoke and mirrors anyway.
Well you’ve got your cross to bear
Don’t you know, that we all got our weights
And It’s not right and it’s not fair,
don’t you know, it’s gonna be okay
It’s smoke and mirrors anyway.