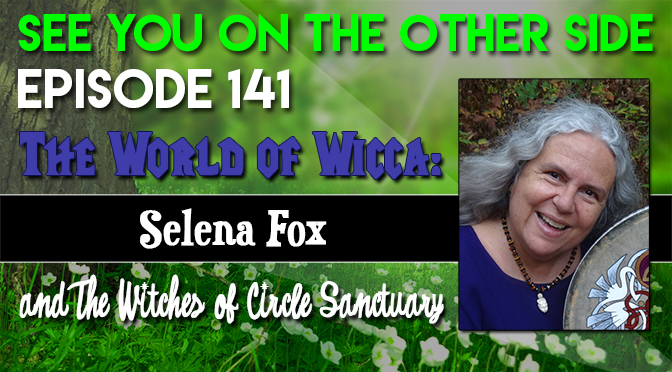 With Beltane (May Day) on the horizon, we thought it was the perfect time to interview Wisconsin’s favorite Witch, Selena Fox. Selena is a Wiccan priestess who has been performing public Pagan rituals  since the early 1970s and she is the leader of the Circle Sanctuary Nature Preserve in southwest Wisconsin (geologically known as the Driftless Region).

Selena’s work on providing support for the Pagan and Wiccan religious community in the United States has been recognized in TIME and People magazines and the Circle Sanctuary Nature Preserve holds public events for the 8 big Earth-based religious holidays. For this episode we concentrate on Beltane, where one of the parts of the celebration is the famous Maypole!

Earth-based religions like Wicca are all about getting back in touch with nature. They connect with their spirituality by connecting with the outdoors. They find their power in the relationship between all things, everything has a spirit from the trees to the rocks to the water to the animals and as such, we can find commonalities with those spirits and each other. Their universe is much more than a single God watching over us, it’s an ecosystem, a greater whole of energy and spirit that are bodies and souls are part of.

One of the best parts of this episode is dispelling the myths that surround Wicca and Paganism. Because the god Pan features in plenty of Pagan imagery (you know, the flautist with the horns and the goat legs) and early Christians decided to use Pan to represent the Christian Devil, when you grow up with mainstream religions the ideas you get about paganism are from The 700 Club and the Tom Hanks Dan Aykroyd classic, Dragnet (and you should stop whatever you’re doing and watch the music video below, you will not be disappointed!)

Dispelling myths is also what this week’s song is about. We already talked about Walpurgisnacht in our Devil’s Night episode, but that’s the night before May Day where the witches were supposed to meet up in the German mountains and plot their wicked deeds for the year. Well, in this song, someone stumbles upon the witches’ gathering but realizes that it’s not wicked, they’re just having fun and like everybody, happy that Winter is over!

Click on these links if you’re like to learn more about  Selena Fox on Facebook or visit the official Circle Sanctuary calendar to see when the next public event is where you can join in the fun.

What did I see out behind the mountains
What did you see when you looked at the full moon?
Was it demon wings and hellfire in the sky
Did you see the witches flying for our doom?

They danced around the Maypole,
The earth made love to the sky
I waited and I prayed for mercy,
But old Scratch never arrived.

So what were we afraid of,
What was the magic spell?
Where was all the the temptation
That would lead me right to Hell?

So i guess that they’re not wicked,
I was scared of the wrong stuff,
They’re just happy that Winters’s over
And want to party in the buff!

One thought on “141 – The World of Wicca: Selena Fox and The Witches of Circle Sanctuary”