Nick Redfern is the author of  40 books on UFOlogy, cryptozoology, secret societies, conspiracies, and the paranormal.  An incredibly prolific researcher and author, Nick usually contributes about 2 books a year to the field. From the Men (and Women!) in Black (the real kind, not the Wil Smith variety) to the Loch Ness Monster to the CIA’s mind-controlled sex slaves (say what?!), Nick has covered almost every possible paranormal story there is.

You’ve probably read some of Nick’s writing on the Mysterious Universe blog or in FATE magazine or have heard him on Coast to Coast AM or seen him on Ancient Aliens (no, he’s not the dude with the crazy hair), Monsterquest, or Penn & Teller’s Bull$%^. When there is news of the strange and unusual, Nick finds a way there. Raised in England, Nick Redern moved near Dallas, Texas and that’s where he spoke to Allison and I.

Our discussion with Nick ranges from his new book on secret societies (with so many presidents Ivy Leaguers or members of Skull & Bones, we were eager to learn if President Trump was part of any secret organizations…) to Victorian Men in Black (could that be the real inspiration for Torchwood?) to the most interesting part of the interview for me.

Of all the stories that Nick has heard, the one that surprised him the most was of the Puerto Rican Chupacabra (a beast that we discuss in depth in episode 24 of the podcast) and just how believable and credible the witnesses to the stories were. That took me for a loop, because at the end of our episode, I was thinking that the Chupacabra, the mystical goatsucker itself, was just the product of an overactive imagination after someone had watched Species (a film that could have used a lot more imagination!)

I was glad however that I got to tell him my own story that was influenced by one of his books (I also told this full story in our Exploring Cryptozoology roundtable discussion in Episode 66.) On a trip to the UK and Ireland in 2008, I was reading his work, Three Men Seeking Monsters, which was about Nick and his friends going to the locations of legendary paranormal sightings across Britain, listening to punk rock, and drinking prodigious amounts of ale. That was the kind of trip that I could get behind and it was a fun book to read while we were on our own road trip across the island. 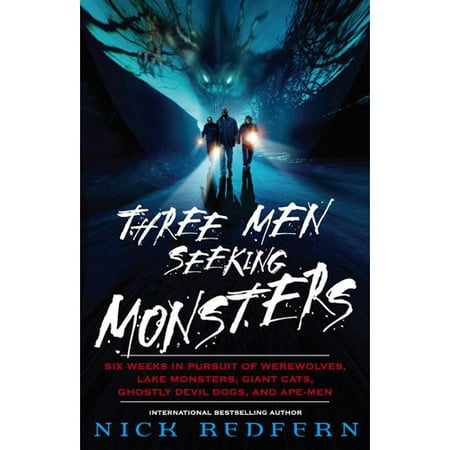 It was a weird time because I was just about to quit my day job to go for it as a musician and my wife (girlfriend at the time) was contemplating leaving her career as well. So we were a couple of people who were planning on changing our lives completely.

We went to Ireland for a few days on the trip to see the sites and we visited the Blarney Castle,  where you kiss the Blarney Stone and it’s supposed to give you the gift of telling lies and making up stories, which sounds bad right before I tell a crazy story.

One of the concepts that Redfern deals with in Three Men Seeking Monsters is that maybe these paranormal visitations of ghosts, UFOs, Bigfoot, faeries, and the like are really just manifestations of our belief, the Tulpa or “Tibetan thoughtform”. As Wikipedia calls it, “a being or object created through sheer spiritual or mental discipline alone. Indian Buddhist texts call it an unreal, illusory, or mind-created apparition.”

I’d never heard of that before and I thought it was a really unique concept at the time. We were talking about it a couple of days earlier. While we were walking the grounds of the castle, we were in the park alone when we spotted the shadow of an animal a hundred yards away. I saw what I thought was a dog or small wolf. In the back of my mind a little bit, I was terrified it was some kind of Hellhound like the kind Nick talks about in his book (hey, when you’re all alone walking around in a foreign country, sometimes your mind wanders a bit!) My wife, however, said she saw a cat.

Which she thought was a miracle, because while she was considering a career change she’d been offered a position at a cat specialty clinic in town just before we left and was wandering around the British Isles hoping to find any kind of sign on what to do with her life. Seeing a mysterious shadowy animal while on the trail was one thing, but us both seeing something different was another. And her seeing a cat was the icing on the cake.

Who knows what it was? Probably just a normal Irish kitty running around, but it certainly felt like something else. And as we checked our cameras and it disappeared when we looked away, it sure felt like it might be that sign she was looking for, and that it just might have been a Tulpa, the thought form that I first read about in Nick’s book just days earlier.

In honor of Nick’s book and Chupacabra stories and the strange creature I saw in the woods, we thought this week’s song would be perfect for a little beastly Sunspot goodness about , this rocker is actually based on the fable of the “Scorpion and the Frog” and it’s called “Nature of the Beast”.

I’m loving, caring, and kind,
you’ll put your stinger in my backside,
your venom I can’t resist,
so let’s get on with this little tryst.

I’m naive, but I’m not a fool.
You’re designed to be cold and cruel.
You can’t help your insatiable bloodlust,
I can’t help my misguided trust.

You can’t deny what you can’t control,
the beast is cold of heart but pure of soul.
there’s no changing spots through an exit poll,
so let’s take a dive in the swimming hole.

One thought on “137 – Tulpas, Secret Societies, and the Chupacabra: The Paranormal Cornucopia of Nick Redfern”