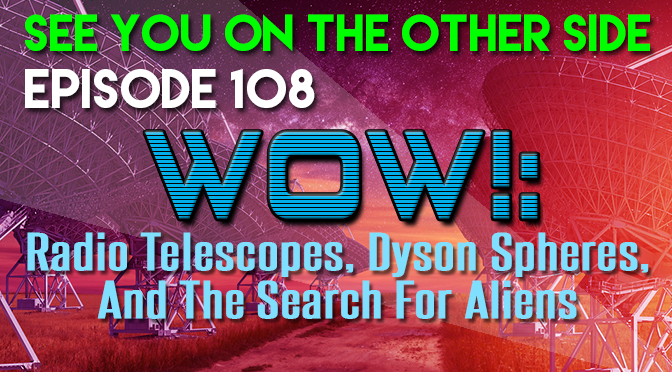 We’ve discussed SETI (the Search for Extraterrestrial Intelligence) before when we talked about that Russian billionaire that gave a hundred million dollars to the quest to find aliens, but this past week had a huge announcement for those of us who keep our eyes on the skies.

We’re talking about the signal that was reported by a Russian radio telescope in May of 2015 but for some reason has only entered the public sphere starting last week and was especially exciting because it was all over the mainstream news sources. Usually when this kind of news happens, it gets relegated to UFO or conspiracy blogs. It’s easily weekly that I have to trudge through various reports that a UFO was seen on the live feed from the International Space Station and NASA quickly turned off the cameras.

So when it gets announced to the regular world that an amazing signal was detected from space, it’s big news for us and we wanted to talk about it. I hate to disappoint everyone but it’s already being disavowed. CNN is already saying that scientists are saying it’s probably of terrestrial origin, some kind of disturbance or weird reflection off an old Soviet satellite, just Cold War spy technology coming back to spoil our fun.

But how do we know that this isn’t just the cover-up? Once the world governments realized what was going on, they decided to shut it down before the truth got out?! Well, that certainly is a possibility and we know that the government loves to keep things from us but even though I’d love for this to be some kind of cover-up of an actual alien transmission, it’s probably not. And for a couple of reasons:

Back in college, when we all ran SETI@Home on our computers instead of a normal screen saver (You still can, just check it out right here!) most of the signals that we were processing came from the radio telescope at Arecibo in Puerto Rico. The largest telescope actually has just finished construction in China and is scheduled to be operational this month(!)

So a quick primer on radio telescopes in case you’re wondering. It is a radio antenna like the one on your car, but while the one on your car can maybe pick up a signal from 80 miles away if it’s in AM mode, the radio telescope is big enough to pick up radio waves in space. And scientists can take those radio waves and use them to find out things about the objects that the telescope is pointed at.

Radio telescopes can collect data from further distances than visual telescopes. So, when the signal was announced last week that seemed to come from somewhere near the constellation Hercules, one of the exciting aspects of that was it seemed to be purposeful and for the signal we received to make it here from that distance would require the energy of a Kardeshev Type 2 civilization.

Huh? Okay, Kardeshev was a Soviet astronomer who developed a scale for the technological advancement of civilizations based on the amount of power that they could harness.

And oh man, that Next Gen episode was so sad, wasn’t it? RIP James Doohan, we still love ya!

But here’s something cool, in the past couple of years, we’ve had two strange readings from stars where their brightness has changed inexplicably. We expect up to one percent of the brightness to dip when a planet passes in front of them, but these dips are more like twenty-two to forty-five percent. So that means that something gigantic is getting between us and the star, something like a Dyson Sphere!

Of course, scientists always have an alternate explanation, but thinking that it’s extraterrestrials building a megastructure designed to harness the power of an alien sun is a lot more fun, and I’m sticking with that for today.

But on August 15th, 1977 there was a signal detected at the Big Ear Radio Telescope at Ohio State that was dozens of times stronger than the background noise of space. Lasting just seventy-two seconds, astronomer Dr. Jerry Ehman circled it on the printout and wrote down “Wow!” by it (hence the nickname of the signal.)

Why was it such a big deal? First, the signal was heard near a “protected frequency” that other earthbound transmitters aren’t allowed to broadcast on so it probably wasn’t a terrestrial source. Second, the signal rose and fell during the 72 seconds, meaning that it got more intense as the Earth’s rotation brought the radio telescope’s “beam” closer to the signal and less intense as it rotated out. That means it’s probably not some kind of interference which would have acted differently.

It’s the closest thing to an extraterrestrial radio source that we’ve ever seen, but it only lasted that minute and twelve seconds. Several attempts have been made to detect another signal coming at that intensity from that area of the cosmos and we haven’t heard anything yet.

Now, Professor Antonio Paris (c’mon, that’s an awesome name!) at St. Petersburg College in Florida (Note about this part of the podcast – I totally mixed up St. Petersburg and St. Augustine while we were discussing this) has come up with a plausible theory is that the intense signal might have been coming from some comets that as of 1977 were undiscovered. He’s hoping to test it in the next couple of years when the comets make another trip nearby Earth.

Stephen Colbert actually made a response to the Wow! Signal on his Comedy Central show a few years back…

So, we haven’t found that undeniable evidence that’s going to convince the straights that E.T. is out there, but that doesn’t mean radio telescopes haven’t been inspiration for our sci-fi over the past few decades. Great places to see radio telescopes in science fiction:

At the end of the episode, we also introduce our friend, Tobias Wayland, from The Singular Fortean Society. He is a Madison-based blogger and paranormal researcher, working with artist and fellow researcher Emily Bartos. They recently attended the Art of Darkness event in Minneapolis and he wrote up the event at their website.

This week’s Sunspot song is a simple track about calling out into night sky and only having one word to say when it answers you back. Wow!

Just how long can you stare?
At the emptiness inside a prayer,
An ear peeled to every band,
to hear a loneliness that just expands.

All the space between us is so black,
Patience just a virtue that I lack,
Until the void finally calls back,
I’ll scream into the night alone.

Wow, I heard you.
How, where’d you go?
Now, I’ll follow,
so please phone home.

Now the long wait can begin,
(I heard you),
when will you show yourself again
(where’d you go?)
It’s funny how just one time,
(I’ll follow),
Can forever alter  your life,
(please phone home).