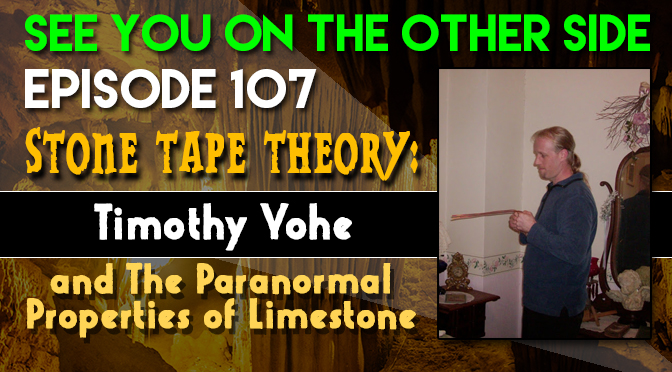 In addition to being a fun way to learn new stuff about the weird world, paranormal conventions also give you the opportunity to meet like-minded individuals. In fact, that might be the best part. If you’re surrounded by people at your job or in your family who don’t share your particular obsession with the more wonderful aspects of the world, well then they can get tired of talking about the supernatural pretty fast. Or sometimes you get shut down if someone is a little too religious (I just had someone post on the wall of the Madison haunted history tour that by telling ghost stories we were really summoning the Devil… yikes!)

So, it’s always great to bring people on the show that we meet when we’re out in the wild. We met Timothy Yohe at the Haunted America Ghost Conference in Alton, IL. Hailing from St. Louis, Tim is a paranormal researcher whois as interested in the scientific aspect as he is the spiritual. He runs two blogs, Paranormal Insights (with a more spiritual bent) and Paranormal Entanglement (with a more scientific bent).

We were intrigued by Tim’s theories on how limestone of all rock, seems to be the likely candidate of the kind of stone that would be able to “record” as in the stone tape theory.

What’s the stone tape theory? According to Wikipedia it’s the speculation that ghosts and hauntings are analogous to tape recordings, and that electrical mental impressions released during emotional or traumatic events can somehow be “stored” in moist rocks and other items and “replayed” under certain conditions.

In 1972, this theory was exposed to a huge population when the BBC put on a ghost story called The Stone Tape that was written by Nigel Kneale, the writer of the seminal sci-fi saga Quatermass (I wrote a little obituary for him on the Sunspot blog when he died in 2006.) Funny enough, the stone tape theory was first articulated by an archaeologist-turned-parapsychologist named Thomas Charles Lethbridge, who also believed that extraterrestrials had a had in shaping human evolution, a subject that Nigel Kneale mined to great effect in his classic Five Million Years To Earth.

Here’s the stone tape theory part of the episode of Arthur C. Clarke’s World of Strange Powers that we mention in the podcast. There’s also a ghost story from Wisconsin, which I was delighted by seeing my home state in a UK TV show as a little lad.

One of Yohe’s ideas is that since limestone is made up of former organic matter, it might contain some residual living energy that spirits might be able to tap into. Because it’s calcified bodies of sea life, he refers to it as paranormal plankton. He even admits it’s a stretch, but at least he’s trying to find some kind of mechanism for it using the real world. That’s definitely something to admire.

Tim gives us his theories in depth during the interview and if you’d like to check out his book, click here to take a look at Limestone and Its Paranormal Properties: A Comprehensive Approach to the Possibilities,  which is available in Paperback or Kindle e-reader format.

Tim’s wife often comes with him on his paranormal investigations and haunted tours. One year when they were in Alton and on a tour through the haunted cemetery, she was using a dowsing rod (the oldest ghost detecting device according to paranormal historian Troy Taylor) and felt herself being led through the cemetery towards one of the stones in particular.

I’m not an “orbs and mists” photos fan, but Tim presents this evidence as the mists and orbs that weren’t there when they originally were looking but showed up at the grave that his wife was being led to. While I’m the world’s biggest orbs skeptic, I have to admit it would be pretty neat to take a picture where your wife was telling you she felt spiritual energy happen and a mist appears in the photo out of nowhere.

And Tim’s wife is part of the inspiration for his next book, which will focus on pregnancy and the paranormal. When Tim and his wife were on a ghost tour and she was pregnant, she was the focus of a a good deal of supernatural happenings while in a haunted house. A few days later they tragically learned that the baby had died in the womb and it began to make them wonder just why she had experienced so much activity. Tim’s wife and he explain it in their own words in a blogpost and it brings up some interesting questions that he’s going to pursue in his next work.

This week’s new Sunspot song is inspired by our conversation with Timothy Yohe, the stone tape theory, and the idea that somehow rocks can record psychic energy.

“Captured In Limestone” by Sunspot

Stories yet unknown
captured in limestone

It’s in the walls
in the roads
in the rocks
that surround me,
Someone is here,
Or was before.
I must have stepped into a dream

It’s in the walls
in the roads
in the rocks
that surround me,
Someone is here,
Or was before.
I must have stepped into a dream