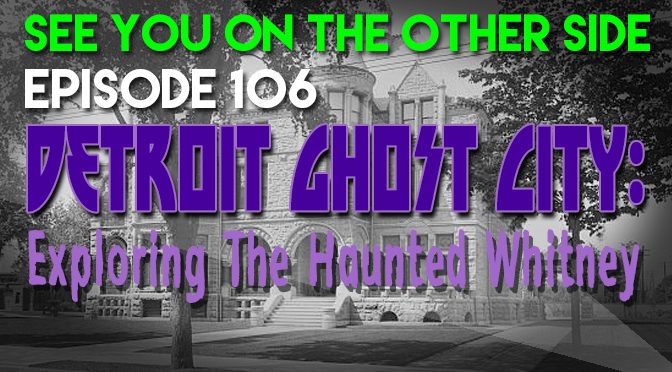 Love it or hate it, SyFy’s Ghost Hunters is really the show that jump started excitement about the paranormal in the 21st Century. Their influence on the general public’s view of ghost hunting is tremendous (which makes the lack of attention to paranormal reality shows in the Ghostbusters remake even more disappointing.) Season eleven, episode three is called “Phantom For the First Course” and it’s an investigation of the haunted Whitney Restaurant in Detroit, Michigan.

And that’s when we got excited, because good friend of the show, Lisa Van Buskirk from Madison Ghost Walks, has been there investigating and knows the ghost hunting team that has made the haunted Whitney their paranormal home, Haunt Investigators of Michigan. That’s when we decided to get their take on the Ghost Hunters episode so we could discover the real story behind the haunted Whitney Mansion which is now a restaurant and bar.

Built in 1890 as a mansion for the family of Midwest lumber baron, David Whitney (who also has a Detroit skyscraper named after him), it took four years to finish the palatial estate and it was notably the first private residence in the United States to feature an elevator. Whitney died very early into the Twentieth Century, but his family continued to live there for several years. They eventually sold the property and it became a hospice for several decades before being retired for awhile and reopening as a restaurant in the 1980s. More recently restored, it was considered creepy enough to be the location used in the 2012 vampire film, Only Lovers Left Alive with Tom Hiddleston and Tilda Swinton.

Marc Ortiz and Mark Waynick from The Haunt Investigators of Michigan both grew up near the Motor City and were inspired to investigate the paranormal after personally experiencing things in their youth that they couldn’t explain. This lifelong interest eventually led to them forming the paranormal group which has investigated different sites all over the country. Their main haunt (ha!) however is Detroit’s Whitney Mansion where they are the in-house paranormal investigation team (now composed of eight members.)

In the podcast, we talk to “The Marks” to get their perspective on the episode and how the SyFy Ghost Hunters jibed with their own experiences in the haunted Whitney. (Spoiler Alert: They feel like the show was a pretty good representation of the place) and then share some of their best evidence with us of not only the haunted Whitney but another location in Detroit, a flower shop with a mysterious occult altar in the basement, just check out the YouTube links below.

The Haunt Investigators of Michigan host a paranormal dinner monthly at the Whitney as well as schedule public investigations every once in awhile. For more information on these guys and the awesome work that they’re doing, make sure to Like their Facebook page and join them next time you hit Detroit Ghost City!

Detroit is a great city which Sunspot has a lot of affection for, because they’ve always treated us well when we’ve performed there, but sometimes the rest of the Midwest likes to treat it as a punching bag because the city has had some rough times. This week’s song is about how it’s easy to use other’s misfortune to make yourself feel better, the Germans even have a word for it, it’s called “Schadenfreude”.

There’s just a little part of me that’s happy I’m not you.
You know the Germans have a word for it, of course they do.
It’s the speeding ticket for the other guy,
It’s the coffee spilled on your dumb boss’ tie,
Reality television when some dumb chick cries.
Uh oh boo hoo.

It’s nothing personal you see,
it’s just the relief when I thank God that it’s not me.
I know I come off like a mean-spirited twit,
but I bet one time you were thinking it.
It’s on Facebook where you complain about your friends,
It’s the morning where your hair is all split ends,
it’s the fact that you have to wear Depends.
When you just wanna quit, I kinda love it.