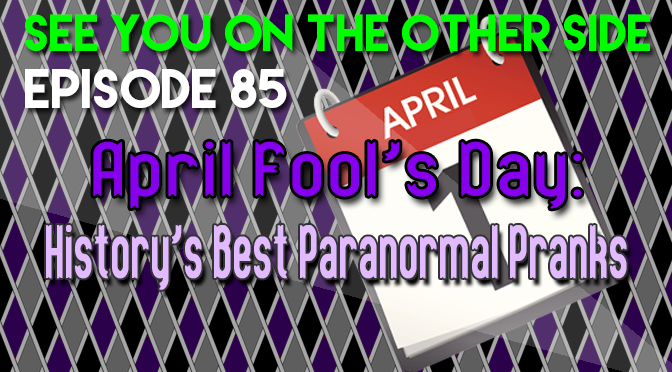 April Fool’s Day. Just how did we get an unofficial holiday that’s based around making the people around you look stupid?

First things first, we have an update from our Zombie Apocalypse episode, because there’s been new research that about the parasite Toxoplasma Gondii that lives in the bellies of the little feline friends. This parasite has been said to manipulate the behavior of rodents to make them run towards cats instead of away from them!

We talk about the Gizmodo article last week that discussed how toxoplasmosis could be linked to the Rage disorder, IED (Intermittent Explosive Disorder.) Ever have a friend that blows up at the littlest things for no reason or that has completely unpredictable behavior that results in one or more of you spending the night in jail? It just might be the parasite. In the movie, 28 Days Later, the virus that turns people into cannibalistic monsters is called “The Rage Virus”. Coincidence?

So, April Fool’s isn’t just a Hallmark holiday, it’s been around for hundreds of years and we’re not quite sure the origin behind it. Some say that it has to do with the changing of the Gregorian Calendar to the Julian (when celebrating the New Year went from April 1st to December 31st). If you got the New Year date wrong after the change, then you were the April Fool!

There was even an April Fool’s Day prank about the origin of April Fool’s Day when a Boston University professor suggested that it came from a day when the Holy Roman Emperor decided to let a court jester rule the land for a “day of absurdity”, the only catch is that he made the whole thing up and Associated Press writers didn’t catch it for a couple of weeks. You can still find that origin floating around the Internet (of course!)

But it seems that it’s not a Western Civilization phenomenon, because they have something similar in India as well for their Huli festival and people have traced this kind of celebration all the way back to Roman times.  The  best guess is that humans have been celebrating the Vernal Equinox for thousands of years and part of that celebration of new life is playing jokes on each other.

According to the Witchology website, even though we’re not clear on the origins of April Fool’s Day, there are some superstitions behind it:

But throughout history, people have used this time of year to pull paranormal pranks, from “discovering” the Loch Ness Monster to landing a UFO in London.

The song this week is the Sunspot song, “Fool”. A track about being unafraid of getting your heart broken again and again. It’s better to have an open heart that is vulnerable to the evils of the world, than in the words of John Lennon, to “hide your love away”.