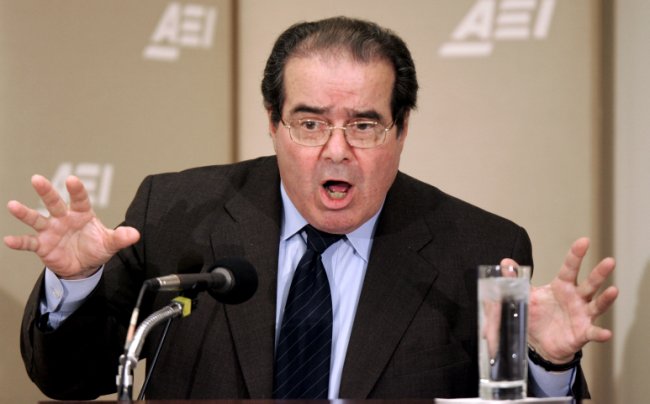 While were busy working on the latest podcast over the weekend (our remembrance of astronaut and psychic researcher, Dr. Edgar Mitchell), one of the most divisive figures in American politics died, Supreme Court Justice, Antonin Scalia. Conservative Hero and Liberal Punching Bag, he elicited stronger feelings in the American electorate than almost anybody else. And you could see that online, there was a lot of delight in my social media feeds at his death (I live in the liberal enclave of Madison, Wisconsin where just because you’re progressive doesn’t mean you’re nice.) Celebrating a rival’s death is a bit macabre, but this is the Internet, so that’s kind of par for the course.

Honestly, I care more about the agenda of Scalia’s Reptilian Overlords more than anything else, I doubt there’s any actual humans left on the Supreme Court. This year particularly, the Reptilians are trying to give us the illusion of “change” more than ever with those wacky “outsider candidates”!

He was found dead Saturday morning at a Texas ranch. Okay, it’s a 79-year old man on a hunting trip and no offense, but taking a look at the guy, he wasn’t on a marathon training program. Sounds like a heart attack in his sleep and a peaceful death, actually not that bad a way to go (I plan on going kicking and screaming, myself.)

But the first report shows that he was found with a pillow over his head. What? This wasn’t a David Carradine-style accident, was it? (Although there is something particularly poetic about a man so interested in protecting “traditional sexuality” dying in a way that Clyde Bruckman once predicted for Agent Mulder.)

Okay, now that I’ve planted that pretty little image in your head for a second, let’s talk about the Antonin Scalia conspiracy theories behind the death of a 79-year old out-of-shape man. Of course, my man, Alex Jones, was on the case right away. He says that his “gut feeling” is that Scalia was assassinated and that he’s wondering if Clarence Thomas, Ron Paul, or Donald Trump could be next. They’re old guys too, but I think eyebrows would be raised if conservative old men just started dying by the truckful.

However, if you’re 69 years old in 2016 and English, go see a doctor immediately.

The fact that Alex Jones exists, makes money, gets on CNN and Howard Stern, is almost too much fun for me sometimes. He can find a conspiracy anywhere and the death squads are always on the march. But as a wise man once said, “Just because you’re paranoid, don’t mean they’re not after you.”

Beyond Alex Jones, here’s a guy that thinks the fact there’s no autopsy and Scalia declined his usual Federal Protection before going to the ranch are both very suspicious and an investigation should be opened immediately. He at least refrains from saying anything too crazy, but the headline “Forget ‘conspiracy theory.’ This is real.” is a little too much.

But this dude takes it all the way, saying

Is it also possible that an evil murdering homosexual communist President with only 10 months left in office could have ordered a hit so that he could drive that final nail into America’s coffin? Why not?

But I’ve gotta say when you call Obama a homosexual (we’ve all seen his wife and kids), Obamacare communist (it makes the healthcare industry make more money than anything), and a murderer (well, the jury is still out on drone strikes on American citizens), you’re going to lose some credibility with me right away.

But the Washington Post even deemed it important enough to discuss the conspiracy theories surrounding his death. Thing is, the more we talk about the conspiracy theories, the more people will believe it over time. Do you know a single person that actually believes in the Warren Commission’s official report on the JFK Assassination? I don’t. We’ve been told for fifty years that it’s a conspiracy, eventually you start believing it, even if it doesn’t really matter anymore.

And right now, the more conspiracy theories fly (even with just reporting that the theories exist), the more people are going to get it in their heads.

It seems easier to rile people against each other more than ever, and swirling suspicious questions around an old man’s death start the blood boiling before the body’s even cold.

It’s always going to be divisive when a Supreme Court justice dies in an election year and of course the Democrats are going to try and take advantage of that, just like the Republicans are going to try and delay it. That’s politics. And now we can distract ourselves for the next six months with the Culture War over the Supreme Court and then it’s time to go right into the election, the Political Super Bowl. So, maybe when we’re done arguing with each other in ten months, is that when the politicians actually try doing something for the people?

Huh, and I used to think it was foolish to believe that there’s Reptilians controlling the narrative.