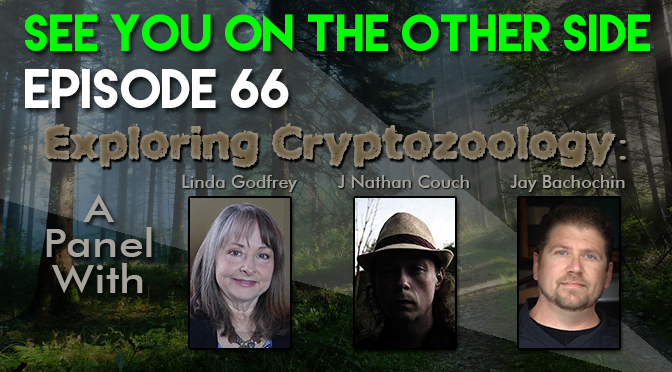 Cryptozoology is the study of creatures that are only rumored to exist. “Crypto” is ancient Greek for “hidden” or “secret” and “zoology” is the study of animals. So, right there, the word defines itself – cryptozoology is the study of hidden or secret animals. These secret animals are called “cryptids”. The suffix “-id” is another part of language derived from Greek to mean “belonging to” or classified as – think the word “hybrid”, belonging to two things – a cryptid is something that is classified as hidden or secret. Loch Ness Monster, Bigfoot, the Chupacabra, and the Thunderbird are all examples of cryptids.

While there are plenty of legends and myths surrounding most cryptids, Cryptozoology is more science than magic. While new large animal species are discovered only rarely (as compared to insects, where it seems like new species are discovered all the time), it’s not unheard of for them to be discovered, particularly underwater. The most famous example of this is the Coelacanth, a fish that scientists thought was extinct for millions of years, but it turns out that we just weren’t looking deep enough into the ocean.

Even the kangaroo was thought of as a mythical beast at one time. When people brought back reports of a man-sized hopping animal that had two heads (one at the top and one by their stomach) people thought it was crazy. But by now, pretty much all of us have probably at least seen a kangaroo in a zoo, maybe even with a joey in its pouch. Mythical beast? Not really. Just more cute than anything else. The Komodo Dragon, Giant Squid, and even the Mountain Gorilla were all rumored at one time to be figments of overactive imaginations. Now we know better.

In this episode, we bring together three honest-to-goodness experts in the field of cryptozoology. While there are no accredited programs in the field currently, our intrepid panel has taken it upon themselves to dedicate much of their lives to understanding these mysteries and we respect their scholarship and field research.

Linda Godfrey uncovered tales of an upright wolf creature in Elkhorn, WI in the early 1990s called the Bray Road Beast. Since then she’s become a leader in the field when it comes to mysterious beasts and strange phenomena. J. Nathan Couch is the author of two books on paranormal topics His latest is the Goatman: Flesh or Folklore. And last, but not least is a Jay Bachochin, a Wisconsin researcher who hunts the truth, and one of the hardest working investigators out there in the field of Bigfoot research. He has clocked countless hours searching for the unknown.

So, it’s our biggest discussion ever as Wendy, Allison, and I share the table with our experts. From Mammoth Cave to Wisconsin’s Kettle Moraine, Ireland’s Blarney Castle, and more, everyone retells their favorite stories as well as personal brushes with the uncanny that have had a big impact on our lives. Jay even tries to call Bigfoot with a special Sasquatch Call, so make sure to listen to this one with headphones on, because you don’t want to attract Bigfoot to your home!

No wonder we love monsters, no wonder we’re in awe of the unknowable. People love a mystery (remember LOST, I know you do and I miss it too, at least the good seasons), and we are in love with the notion that maybe that’s not all there is. If there are creatures out there that we cannot find, then maybe we don’t have it all figured out. Maybe the world is bigger than we can categorize or pinpoint, maybe we just want some romance back in our lives, where not everything is quantified and classified. A life’s work of searching for the unknown at least on its surface, feels much more meaningful than shuffling paper back and forth or analyzing spreadsheets. Because that sure doesn’t feel like a life’s work.†

Whatever post-Industrial Revolution Hell we’ve created for ourselves with factories churning out pollution to make trinkets that we don’t want, food that we’re told is bad for us, and vocations that are only meaningful in their relation to profits certainly could use a little mystery, couldn’t it?

And that’s what this week’s song is about, “Mystery” by Sunspot.

I met a girl who used to dance with some flowers in her hair, barefoot in the street to a song that seemed
only she could hear.
Well, we talked all night about wrong and right,
we talked the Bible and prophecy.
She said she don’t care to what God I swear,
as long as I don’t tell her what to believe.

When we know all there is to know,
and there’s nothing left to comprehend,
when you think you found what you’re looking for,
I believe it’s time you think again.
Don’t try so hard to understand,
the things you don’t need your eyes to see.
For knowing it all ain’t part of the plan,
so just enjoy the mystery.

I met an old man who used to laugh,
at some gag I couldn’t hear,
out loud and big, while he took a swig,
with some joker that wasn’t there.
Well, he lectured me on our frailty,
the difference between man and divine,
so don’t waste your breath talking ’bout your death,
you’ll live longer than you are alive.

When we know all there is to know,
and there’s nothing left to comprehend,
when you think you found what you’re looking for,
I believe it’s time you think again.
Don’t try so hard to understand,
the things you don’t need your eyes to see.
For knowing it all ain’t part of the plan,
so just enjoy the mystery.